Hope that the health law’s online insurance marketplaces will work well enough to enroll millions this fall had already faded before the administration disclosed results Wednesday. News that only 27,000 had signed up for private coverage on the federally run marketplaces through October amplified the doubts. 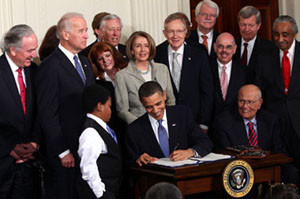 President Barack Obama signs the Affordable Care Act during a ceremony at the White House in March 2010 (Photo by Win McNamee/Getty Images).

Experts increasingly doubt the federal site serving 36 states will function properly by the White House’s self-imposed Nov. 30 deadline — or maybe even by Jan. 1, when insurance coverage is scheduled to begin. Some state-built sites, which enrolled 79,000 in October, have their own problems.

How much does their early failure jeopardize President Barack Obama’s marquee law? Are functioning insurance portals essential to other goals of the law? Kaiser Health News asked analysts for a damage report.

Q: Can the federal portal be fixed in time?

A: Many don’t think so, and some worry about the consequences.

“Given where they are right now, it would be an unbelievable feat if they were to be ready” even by Jan. 1, said Bill Copeland, a top health care consultant at Deloitte.

The administration faces a credibility problem if it fails to meet the Nov. 30 deadline, said Dr. Ezekiel Emanuel, a former White House health care adviser. Signup delays could distract consumers from the benefits of coverage and cause many to tune out, he said.

Q: Why not wait until the websites are fixed and then have people line up? Or extend the enrollment period for individuals to gain coverage into the middle of next year?

A: Many can’t wait. Their policies expire Dec. 31, and they fear a gap in coverage. Others are uninsured and had expected ACA benefits starting in 2014.

Waiting worries insurers, too. They designed and priced marketplace policies based on the idea that consumers would enroll between Oct. 1 and March 31 for coverage starting as early as Jan. 1. Delaying signup could leave carriers with disproportionately sicker and more expensive customers, they say.

Q: What about a bigger fix? Let people keep the policies they have for another year. Or create a bailout pool for those who need emergency coverage until the websites presumably work in 2015.

It’s getting late even for extending this year’s policies. In many cases neither insurers nor state regulators are prepared.

“If we had known this was going to happen in September, early renewing (of existing plans) probably was going to be the answer,” said Joseph Antos, a health economist at the American Enterprise Institute. “Now that we know in November it’s not looking too great.”

Anything more ambitious, such as a new, national “risk pool” similar to the temporary coverage given those with existing illness starting in 2010, would probably require Congress to pass a new legislation.

“Since Congress can’t agree on big things like debt ceilings and a budget,” said Copeland, “I don’t know how this is going to get solved.”

Q: What’s the worst-case scenario for those unable to sign up?

A: Millions, including those with existing illness, could have trouble getting coverage. The administration may be working on a plan to have consumers contact insurers directly, but some worry they could end up buying the wrong policies if they don’t see the full online menu.

“We have had concerns about direct enrollment,” said Judith Solomon, vice president for health policy at the Center on Budget and Policy Priorities, which supports the law. “Consumers won’t have the full ability to shop in the short term.”

Those who do obtain insurance could have trouble gaining online premium subsidies, which so far are available through the government portals.

If computer breakdowns disproportionately deter the young and healthy from joining the ranks of the covered, insurers could lose money. That could set the stage for premium spikes and the kind of instability in the individual insurance market that the health law was supposed to solve.

Q:  What about the law’s safety valves for unexpectedly large claims in the early years?Measures to compensate insurers with high initial expenses are supposed to keep them from making it up with higher prices for the first three years.

A: Because a quick solution for signup bottlenecks seems increasingly unlikely, those buffers could become more important. Even with extremely low first-year enrollments, some experts argue they could keep prices stable until portals are fixed for a smooth launch in 2015.

“In the long run, our view is that the exchanges and the entire ecosystem are going to be fine,” said Bryce Williams, a health benefits and technology consultant at Towers Watson. “But you’d have to talk about a two- to three-year horizon.”

Successful websites and signup efforts in big states such as California and New York will show that the online marketplace can work and should lead to acceptance elsewhere despite short-term problems, said James Morone, a political science professor at Brown University who specializes in health policy.

“Bottom line: No, they won’t be working” soon, Morone said of many marketplace portals. “And double no, they are not going away.”

Q: How badly do Web failures threaten other aspects of the Affordable Care Act?

A: The health law didn’t just offer commercial insurance on the Web. It expanded Medicaid for low-income consumers in states that chose to accept it. Because the programs have years of enrollment experience, Medicaid expansion is progressing better in many states than efforts to expand access to private insurance.

While the federal site “has been nowhere near as easy to use and efficient as anybody would have dreamed, we’re hopefully in the early innings” of the larger goal of expanding coverage, said Bob Kocher, a partner at venture capital firm Venrock and a former Obama health adviser.

Nor may Web problems have much effect on the health law’s other grand goal of containing costs and making care safer and more efficient.

“Accountable care organizations” that reward better care have been formed across the country. Medicare is penalizing hospitals with too many readmissions of recently discharged patients.

“The notion that one website associated with one part of the law is up late — that the whole law should be thrown out — is an extreme reaction,” said Alan Weil, executive director of the National Academy for State Health Policy.

Will Low Online Enrollments In The Fall Hobble The Health Law?