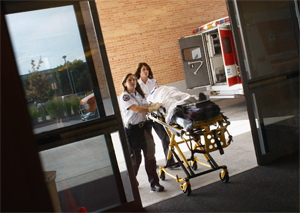 When Kelly Arellanes fell off a horse and suffered a severe head injury in rural Arkansas, medics said she would need to be airlifted immediately to the nearest hospital-50 miles away in Fort Smith. There, emergency surgery saved her life  but at a cost.

The hospital wasn’t in her insurance network, so she and her husband ended up with $20,000 in out-of-pocket expenses that they wouldn’t have incurred at their network hospitals 150 miles away in Little Rock.

Under the new health law, insurance companies must extend several new protections to patients who receive emergency care. One of the biggest guarantees: Patients who need emergency treatment will have their costs covered at the same rate, regardless of whether they are treated at “in-network” or “out-of-network” hospitals.

The law also bars health plans from requiring prior authorization for emergency services. And it mandates that plans follow the “prudent layperson” rule. For example, if a person goes to the ER with chest pain, but ends up being diagnosed with indigestion, the claim has to be covered because going to the hospital under those circumstances made sense.

The provisions go into effect for every health plan issued after Sept. 23  six months after the law was enacted — that offers emergency coverage.

For years, insurance plans have been denying ER claims for a variety of reasons. Although there is little data on the overall scope of the problem, a 2004 RAND Corp. study found that at least one out of every six claims for emergency department care was denied by two large HMOs in California.

One Hour To Live

When Kelly Arellanes’ husband, David, and daughter, Jo, rushed by car to the hospital after the accident six years ago, the neurosurgeon gave them two options. “He said, ‘You need to make a decision: either we go into emergency neurosurgery now and save her life, or we don’t and she’ll have an hour to live,'” David recalled.

Kelly, who had a portion of her brain removed that day, has since then learned how to speak, eat and walk again. The Arellanes’ finances haven’t fared as well. David and Kelly had health coverage through their jobs at Southwestern Bell Telephone Co., now part of AT&T, one of many large corporations that is self-insured. In such plans, the employer sets the benefits package and pays workers’ claims and benefits itself. Southwestern Bell’s plan was administered by United Healthcare. 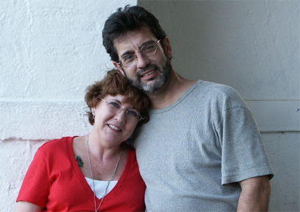 Kelly Arellanes and her husband, David. When Kelly fell off a horse and suffered a severe head injury in rural Arkansas, medics said she would need to be airlifted immediately to the nearest hospital-50 miles away in Fort Smith. There, emergency surgery saved her life  but at a cost.(Family Photo)

Arellanes, 56, said he did call to report the accident within the designated period, but that was disputed in an appeals process. Originally, the plan denied coverage for many of the emergency bills, Arellanes said, but after he appealed, it picked up 80 percent of most of the expenses.

Kelly, now 50, has gone through intense rehabilitation and needs tests and checkups every few months. Without her salary and battered by the bills from the emergency room and continuing medical costs, the family burned through their savings, retirement accounts, investments and their daughter’s college fund. With medical debts of more than $100,000, they filed for bankruptcy in 2005.

AT&T and United Healthcare would not comment on Kelly Arellanes’ case because her family did not give permission to make her medical file public for comment. Her current plan through AT&T has different rates of emergency care coverage, depending on whether the hospital is in network. Under the new law, that will no longer be allowed.

The inclusion of coverage guarantees for emergency care in the new law “was a major victory for us,” said Angela Gardner, president of the American College of Emergency Physicians. “People often can’t stop to check to see if a particular hospital or doctor is in- or out-of-network when they are having an emergency,” she said.

A spokeswoman for the insurance industry, however, said problems with emergency coverage are not widespread and the law’s provisions generally follow what insurers already offer in their own plans. “I do not think this represents a major change for our members,” said Susan Pisano, a spokeswoman for America’s Health Insurance Plans. “It is already the standard most places now, if not universally,” she said.

Consumer groups disagree. Cheryl Fish-Tarcham, deputy director of health policy at Families USA, a nonprofit consumer health advocacy group, said that since some states don’t have regulations on the issue, the federal law will set a uniform standard.

Yet, even when states do have such laws, there have been consumer complaints about insurance company practices. For instance, last December, Pennsylvania insurance officials, working with the state attorney general, determined that 631 consumers had their emergency claims improperly denied between 2001 and 2007 by HealthAmerica, a Pennsylvania-based insurer. The company settled with state officials, admitting no wrongdoing but agreeing to reprocess the claims.

“The federal law gives us more teeth to enforce what we already thought was the right thing to do,” said Dan Honey, Arkansas’s deputy insurance commissioner.