Marilyn Tavenner, the president’s nominee to head the Centers for Medicare and Medicaid Services, was already hoarse when she began her speech at the Care Innovation Summit in Washington D.C. today. However, that did not stop Tavenner, the agency’s acting administrator, from delivering a laundry list of the 2010 health law’s benefits and achievements, including a particularly personal one. 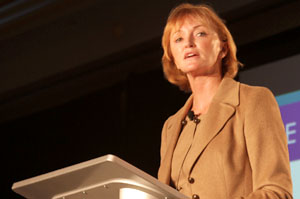 An estimated 2.5 million young adults have gained coverage through the law’s under-26 provision, and “one of those happens to be my daughter,” a type-1 diabetic, Tavenner said. “I have personally benefited from this provision.”

Tavenner will likely make some of the same arguments for the law and CMS initiatives when – or if – she encounters a grilling at her yet-to-be scheduled Senate confirmation hearing. She took over the agency’s top job after previous chief Donald Berwick, a recess appointee whose nomination never went through the confirmation process, stepped down in December. Tavenner made a point to pause and give Berwick credit for his work at CMS.

Among the other health law highlights that made Tavenner’s list were the funds provided to close Medicare’s prescription drug “doughnut hole;” the expanded coverage of preventive services for Medicare beneficiaries; and the creation of state-run, high-risk insurance pools, which she described as “one of the things I’m most proud of.”

She also encouraged the more than 1,000 attendees at Thursday’s summit to look ahead. Many health law provisions go live in 2014, and “24 months is not a lot of time to get a lot of things done,” Tavenner said. “That is where the Innovation Center becomes so important.”

Richard Gilfillan, the center’s director, announced the release of a report describing their work thus far.

Health Law Is A Family Affair For CMS’ Tavenner