The big marketing push to get people enrolled in health coverage between October and March resulted in 3 million people signing up for Medicaid. 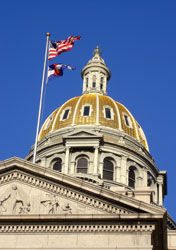 Hundreds of thousands of those people were children who were already eligible and could have signed up even before the Affordable Care Act made coverage much more generous.

They came “out of the woodwork” to get enrolled, analysts say, thanks to the Affordable Care Act’s individual mandate and publicity around its new marketplaces.

In Colorado, nearly 23,000 such children are now getting Medicaid. Their numbers grew Colorado’s Medicaid rolls by 3 percent over last year.

Colorado is one the first of the states that are expanding their Medicaid programs to report how many people coming into the health insurance program for low-income residents could have had coverage before the health law was implemented.

State officials in Washington say 91,000 previously eligible but not enrolled residents got on Medicaid between October and March.

State Medicaid Director Sue Birch said Colorado enrolled 22,784 previously eligible kids in Medicaid and the Children’s Health Insurance Plan (CHIP) from Oct. 1 — when the state marketplace opened — until Feb. 28. Overall, including people who were eligible because of the expansion, Colorado’s Medicaid rolls grew by 23 percent during that period.

The health law called for states to expand Medicaid to anyone earning up to 138 percent of the federal poverty level (about $11,670 for an individual and $23,850 for a family of four), but the Supreme Court said that had to be voluntary. About half the states have opted not to expand.

It was widely assumed that there would be a woodwork effect, but estimates of how many previously-eligible people enrolled around the country are just now starting to come in.

The Centers for Medicare & Medicaid Services last week released a preliminary tally of Medicaid enrollment by state from October through Feb. 28.

The woodwork effect number is easier to estimate in states that didn’t expand Medicaid, because most of any surge in new enrollments between October and March is generally considered to be related to ACA-related marketing and news.

Montana, Idaho and Florida, all non-expansion states, saw their enrollment grow 7 and 8 percent.

Medicaid enrollment fell in seven other non-expansion states. The biggest drop was 7 percent in Nebraska.

The conservative American Action Forum portrays the woodwork effect as an additional burden put on states, whether they backed the law or not.

Birch says she’s “certainly very pleased” that publicity around the ACA resulted in more children who were previously eligible for Medicaid and CHIP getting enrolled in Colorado.

She says the surge in enrollment is the result of more than a year’s worth of work on multiple fronts. The state used a $20 million federal grant to upgrade the state’s old and notoriously clunky Medicaid enrollment software. It then partnered with the state’s food assistance program to help target potential Medicaid and CHIP recipients.

Birch says her agency aimed to enroll a total of 160,000 Coloradans between October and the end of March. State figures show it signed up 158,521 by the end of February.

“We are really pleased that we are probably the first state in the country to meet our targeted goal so closely,” Birch said.

CLARIFICATION: This post was updated at 12:50 p.m. to note that most of the new Colorado enrollees who were eligible before are children.