Treshawn Jones was desperate. Jobless for four months, she had burned through her meager savings, was running low on food for her two young children and barely scraping by on weekly unemployment checks of $307 that didn’t begin to cover her overdue $600 utility bill and monthly rent of $900.

So in March, while at Children’s National Medical Center in Washington, D.C. with her 2-year-old son, Jones asked a sympathetic staff member if she knew of any resources that could help her family. Within minutes, Jones was meeting with Shalesha Lake, a junior at the University of Maryland at College Park who volunteers for Health Leads, an innovative program that has operated at Children’s since 2001. Three months later, with guidance from Lake, the 35-year-old single mother had completed a free job training course offered by Byte Back, a nonprofit group that provides computer training to underserved Washington, D.C. residents, obtained free food and clothes for her children, applied for utility and rental assistance and, best of all, landed a $37,000-a-year job with benefits. 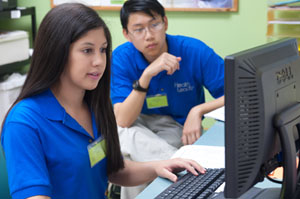 Two University of Maryland students volunteer for Health Leads, an innovative national program that uses highly trained volunteer college students and operates out of Children’s Hospital in Washington, DC. Alexandra Fine, 18, a sophmore is on the left and Nathan Lim, 20, a senior is on the right. (Photo by Sarah L. Voisin/The Washington Post)

The brainchild of Rebecca Onie, who co-founded the nonprofit organization in 1996 as a 19-year-old sophomore at Harvard, Health Leads now operates in 23 urban clinics, emergency rooms and community health centers in Washington, Baltimore and four other cities. The goal of the program, which in 2009 earned Onie a MacArthur Fellowship and praise from first lady Michelle Obama, is both disarmingly simple and unquestionably ambitious: mobilizing highly motivated college students — most bound for careers in medicine and related fields — to help low-income families address their health problems by connecting them with basic services.

Although study after study has linked poverty to poor health — a 2006 report in the journal Pediatrics found that children whose families cannot pay their utility bills are 30 percent more likely to be hospitalized — the medical and social service systems have long operated in largely separate and disconnected spheres. Too often, that results in a medical revolving door, as when doctors prescribe asthma medicines for children living in mold-infested apartments, only to have them wind up in the emergency room because their housing conditions were never addressed.

“Physicians don’t ask these questions because they don’t know what to do with the answers,” said Children’s social worker Alison Page. Most doctors, she added, have neither the time nor the expertise to deal with what health researchers call “the social determinants” of health.

Health Leads attempts to bridge that chasm. Patients fill out a questionnaire that prompts doctors to ask about their unmet needs; using that information, physicians and other staff members can “prescribe” food, housing assistance or child care, among other things. Patients then take their prescriptions to Health Leads, where student volunteers attempt to fill them, helping tap local resources many clients don’t know exist or have been unable to access.

Last year, nearly 1,000 volunteers worked with about 9,300 families, nearly 60 percent of whom obtained at least one resource within 90 days. That may mean locating a food pantry that stays open late and has a Spanish-speaking staff member for a Latino mother who works until 8 p.m.; helping a parent fill out a 12-page welfare application; or introducing a family to a pro bono lawyer if a landlord refuses to make repairs. But one of the most urgent and frequently requested needs — affordable housing — remains largely unmet.

Spurred by the focus on primary care and the importance of having a medical home — central components of the 2010 overhaul of federal health law — Health Leads has embarked on a four-year, $11 million effort to demonstrate that it can improve outcomes and possibly reduce costs. Last year, the federal Agency for Healthcare Research and Quality found anecdotal evidence that the Boston-based program, whose funders include private foundations as well as Blue Cross Blue Shield of Maryland and the Baltimore City Health Department, had a “meaningful impact on the health and well-being of low income families.”

But not everyone qualifies: Those with substance abuse problems or mental illness are diverted to social workers. Volunteers quickly learn that some needs far outstrip their ability to connect clients with resources and that the job requires reserves of patience. “We get requests all the time for affordable housing, and all we can do is direct people to shelters,” said Lauren Hicks, a rising senior at U-Md.; the wait for subsidized housing in Washington, D.C. is about eight years.

Client participation is essential; each receives a written “action plan” that delineates the steps he or she is expected to take and what Health Leads will do, which includes weekly follow-up phone calls. After three unsuccessful attempts to reach them, clients are notified by letter that their case has been closed but can be reopened later. About 16 percent of clients don’t respond to the follow-ups.

At Children’s, where the program operates every weekday in the main hospital and at a satellite clinic on Good Hope Road in Southeast Washington, Health Leads is included in patients’ electronic medical record, enabling staff to track patients’ progress.

Reaction to the program has been “uniformly positive” said Kurt Newman, the chief executive at Children’s, who calls the program “the kind of agent for change you want for a children’s hospital.”

Jane Lowe, a senior program officer at the Robert Wood Johnson Foundation, which has given Health Leads $6 million in grants, likened it to a start-up that is moving into its next phase. “I don’t know that Health Leads is necessarily a magic bullet, but it’s a solution that has a lot of promise,” she said.

Onie, the group’s chief executive, said that in the past two years, 115 hospitals and clinics around the country have contacted Health Leads seeking to start a similar program.

A Desk In The Lobby

Onie, who holds a law degree from Harvard, says that the idea for Health Leads, previously known as Project Health, grew out of her freshman-year experience volunteering at Greater Boston Legal Services. Virtually every client she interviewed had serious, sometimes catastrophic health problems that had gone unaddressed, often for years. One of her more memorable assignments involved collecting dozens of cockroaches that had fallen onto the bed of a severely asthmatic child and gluing them to a
poster board for use in court to force a landlord to clean up. (It worked.)

Struck by the nexus between poverty and health, and “concerned that we were intervening so far downstream,” Onie contacted Barry Zuckerman, then chief of pediatrics at Boston Medical Center. A few years earlier, Zuckerman had founded the pioneering Medical-Legal Partnership for Children, a model that has spread to 235 hospitals around the country. The partnership brings lawyers into hospitals to assist doctors and patients in navigating the legal system to secure services. In 1996, Onie and Zuckerman launched Project Health — a rickety desk set up in the lobby of the Boston hospital, where patients could bring prescriptions to student volunteers.

“That’s sort of how I learned to practice pediatrics,” said Joshua Sharfstein, now Maryland’s secretary of health, who was a resident there in the late 1990s. “I had a patient who kept getting turned down for food stamps, and the student actually went to the [Department of Social Services] office with the family and straightened out the problem,” he recalled. He said that one of his first calls after becoming Baltimore’s health commissioner in 2005 was to Onie; the following year, Health Leads opened in Baltimore.

As the program grew, Onie said, it became clear that a desk in a hospital lobby was insufficient: Health Leads had to be “embedded in the clinical team.” That meant integrating volunteers’ efforts into clients’ medical records and working closely with doctors, nurses and especially social workers, convincing them that the presence of volunteers could free them to handle complex clinical issues.

“Shalesha told me it was my job to call all of the places on the list, and if I bumped into any issues or the number was disconnected, I was to call her,” said Treshawn Jones, who estimates that the two spoke nearly a dozen times. Lake says that Jones’s persistence helped her succeed. “She’s a go-getter, definitely,” Lake said.

“One of the most important things we do is to follow up with the family until the need is met,” said LaToya White, the mid-Atlantic program director for Health Leads. “You want the family to keep pushing through, and to feel that someone is on their side.”

Competition to become a Health Leads volunteer is fierce: Recently, more than 100 students from George Washington University and U-Md. — the two campuses that participate locally — vied for 10 unpaid summer openings. During the academic year, volunteers must commit to a minimum of six hours per week and undergo at least 15 hours of training.

One recent afternoon, Hicks and two other volunteers wearing the program’s trademark electric blue polo shirts sat in the cramped Health Leads office at Children’s Hospital hunched over laptops and cellphones, calling clients, checking the online database of resources and meeting with families who walked in.

Michele Ealey had been referred by her 13-year-old son’s pediatrician for help with housing and employment. Ealey, 45, lost her longtime chef’s job last year; she and two of her sons had been camped out in the basement of a friend who was tiring of the arrangement. Ealey’s youngest son had experienced a recent, rapid weight gain that places him on the brink of severe obesity; his breathing problems had worsened, and he was having trouble in school.

Hicks encouraged Ealey to stay where she was for as long as possible, gave her an action plan with information about job banks and emergency housing, and promised to call her every week to check in. Several conversations followed, but Ealey has not found a job and is considering a move to join relatives in North Carolina.

“I know she’s frustrated,” said Hicks. “You want to be able to help people, but sometimes there’s nothing available.”