KHN’s Mary Agnes Carey talks with Jackie Judd about the congressional conference committee trying to hammer out a bargain on a payroll tax cut extension and the Medicare “doc fix.” If the conferees — who are now discussing the possibility of a permanent “doc fix” — fail to agree to a proposal, doctors who see Medicare patients are in line for a 27 percent cut slated to take effect in March.

> > Listen to the audio of this interview.

JACKIE JUDD:  Good Day, This is Health on the Hill. I’m Jackie Judd.

Senate and House negotiators returned to the bargaining table today to work on the “doc fix” – shorthand for the issue of what doctors are paid when treating Medicare patients. Right now, doctors face a 27 percent cut in reimbursements unless Congress takes action by the end of this month. Kaiser Health News reporter Mary Agnes Carey is on Capitol Hill; she attended the meeting.  Mary Agnes, is there a consensus emerging that the time has come for a permanent fix instead of yet another short-term fix? 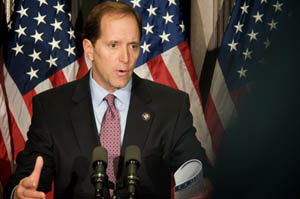 JACKIE JUDD:  Is there consensus about where the funding would come from to create a permanent solution?

MARY AGNES CAREY:  There is not.  You have many Democrats, like Congressman Waxman, talking about the savings from the drawdown of the wars in Iraq and Afghanistan, lets use that money. Some Republicans like Sen. Kyl have also been on board with that. But that is really going to be the difficulty here: Where do you find the funding? Sander Levin, another congressman, he’s the ranking member on Ways and Means said in his mind the war savings is the only pot of money that could help pay for this because the cost of this is increasing over a time and so that will be, as they continue these discussions, that will be the focus. Today was the talk about policy, future talks will talk about how to pay for it.

JACKIE JUDD: This was an idea that was floated last fall, last winter, before the break for the holidays. And there was some resistance to the idea then, and there is still some now. So, I’m curious as to why Sen. Kyl has now come around to the idea of possibly using the war funds and how important a voice is he in moving this idea forward.

MARY AGNES CAREY: Well, he’s extremely important because he is a conservative Republican and could very well influence other members of his caucus to come to the same conclusion that the war savings can do it. Now, there are members on both sides of the aisle that support this, there are members on both sides of the aisle that don’t support it. Some look at the war savings, if you will, as funny money, it’s money that’s not going to be spent anyway, so how can you count it as a savings and then spend it? Many conservative Republicans feel this is not the way to go to fund any of the priorities, including, perhaps, a repeal of the SGR – that this would be new spending and that is not what they want to do.

But, again, you mentioned the time pressure earlier: As the month continues, the pressure narrows, the time window narrows. Perhaps there will be more acceptance of the war savings. This theme is being pushed by so many groups. You’ve got the hospitals that have been pushing it. Of course the AMA has been pushing it. You’ve got members of both sides of the aisle circulating letters: Let’s look at this money, take a look at it.

Dave Camp, who is head of the Ways and Means Committee, who is chair of this conference committee, said he is open to hearing from members on this particular pay-for as well as others. So we’ll have to see how it develops.

JACKIE JUDD: Walk us through what kind of dollars we’re talking about. The CBO put out a report yesterday that addressed that issue.

MARY AGNES CAREY: Just to keep doctors where they currently are will now cost $316 billion over the next decade. And the longer that Congress waits to resolve the SGR issue, the more expensive it becomes. This has grown by leaps and bounds over the last decade on the Medicare payment fix. They have cut physicians at one point, but for the rest of the time since this was put in place in the late ’90s, they’ve never cut physicians. So it makes it more and more expensive. It’s hundreds of billions of dollars to resolve it. And that was another point that proponents of this latched onto today: The longer we wait, the more expensive it gets. Let’s just do it now.

War Savings May Be Key To Long-Term ‘Doc Fix’ Deal