>> Listen to the conversation here.

MARY AGNES CAREY: Welcome to Health on the Hill. I’m Mary Agnes Carey. Obama administration officials were on the hot seat today on Capitol Hill answering questions from lawmakers about implementation of the 2010 health care law. Jennifer Haberkorn of Politico Pro is with us now to give us the latest. Thanks for joining us. 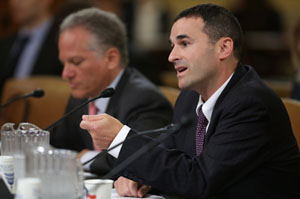 MARY AGNES CAREY: Well, there were two hearings today on the Hill. One was before the Energy and Commerce Committee, which you attended. I went to one before, the Ways and Means Committee. Jennifer, I’d like to start with your hearing at Energy and Commerce. Centers for Medicare & Medicaid Services Administrator Marilyn Tavenner testified. And I understand at your hearing, and this also happened at my hearing, there were a lot of questions about the readiness of the health law’s data hub. Could you tell us a little bit about what the hub is and what are the concerns about its implementation?

JENNIFER HABERKORN: The hub — Marilyn Tavenner kind of described it as a router that you probably have to hook up your Internet at home. This is where all the information is going to circulate in the exchanges. When you sign up to try to get a subsidy, your information will go through this data hub and be checked with the IRS. It will go to the Social Security Administration. All this information is going to go through there. If you can imagine, I mean, my Internet router at home doesn’t always work, and if this data hub is going to have the information of millions of people cycling through it — it’s pretty complicated.

So a lot of the questions Tavenner got today was about whether that’s going to work and whether testing on it has already started. The testing is underway. She said the testing so far has gone well and when issues have popped up, those have been repaired quickly.

MARY AGNES CAREY: At my hearing over at Ways and Means, another CMS official — Gary Cohen — also got a lot of questions about the data hub. Daniel Werfel, from the IRS [was also there]. Both officials are very involved in the implementation of the ACA and were asked repeatedly about the data hub: Will it be ready? And Gary Cohen promised to share with the committee the results of the testing. And I believe that wraps up this month, is that correct?

MARY AGNES CAREY: And at both of our hearings, this issue of verifying if someone needs a subsidy —  in the health law — verifying their income came up.  Can you give us a bit of the back story? And what’s the news there?

JENNIFER HABERKORN: Sure. This kind of cuts directly at one of the Republicans’ chief concerns about this law — that it’s going to open the federal government up to additional fraud. Earlier this month, HHS released a regulation that kind of raised questions about whether, in some states, people are going to be self-regulating themselves, self-attesting, saying “I make $50,000,” and there wouldn’t be any way to check that. That’s important because your income is going to determine if you qualify for a subsidy, and how much.

Marilyn Tavenner, in my hearing today, said that data is going to be checked right away. It’s going to be run up against IRS information and information from Equifax. If I were to say “I make X amount of money,” and if that information does not jibe with what they have at IRS/Equifax, that’s going to trigger an investigation where — I shouldn’t say an “investigation.” But rather, it’s going to raise a flag to double-check that income and make sure there isn’t any fraud there.

MARY AGNES CAREY:  In one of the newer developments, they say they can verify the income of every applicant — that there will be much more certainty about that.

JENNIFER HABERKORN:  Marilyn Tavenner said that, and I’m sure the IRS officials said that as well in your hearing. I think that’s going to be something that politically can be a liability, because, as we know, these federal health care programs — there is fraud in there. There’s not a lot, but there is fraud in there. And it just seems that Republicans are going to be very eager to jump on that when there are instances of fraud. I think in 2014, particularly, when the health law is first starting, that’s going to be something to watch for.

MARY AGNES CAREY:  Tomorrow, in the House of Representatives, the House is going to take its 40th vote on the Affordable Care Act. These votes have been to either repeal the law — either in total or in pieces — or part of the law. What’s the vote about tomorrow?

JENNIFER HABERKORN: Tomorrow is Congress’ last day before the August recess. So they’re going out with another health care vote. This one is to deny any money to the IRS to implement the health law. That is expected to quickly pass the House of Representatives, but the Senate is not expected to take that up, and if it did, certainly Democrats would block it.

So it won’t become law, but Republicans have made clear that they want to hold as many votes as possible to send a message that this law is not the policy they want to see implemented.

MARY AGNES CAREY: What sort of votes might we expect in September after Congress returns from the August recess?

JENNIFER HABERKORN: In September, I think we’re going to see some votes on this verification issue that we talked about earlier — how stringently the government is going to be verifying people’s incomes before they get subsidies. I think we’ll also see votes relating to the IPAB – the Independent Payment Advisory Board. That’s the Medicare board that — it’s not set up yet, but it’s designed to control Medicare spending.

We may see additional bills to defund other pieces of the health law.

MARY AGNES CAREY:  Thanks so much, Jennifer Haberkorn of Politico Pro.