JACKIE JUDD­: Good day, this is Health on the Hill. I’m Jackie Judd. Health and Human Services Secretary Kathleen Sebelius was called on the carpet today about how the health care overhaul law is being implemented, and the complaints came from a leading Democrat and ally. Senior Correspondent for Kaiser Health News Mary Agnes Carey covered the Senate Finance Committee hearing and joins us now. 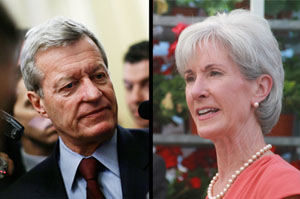 Mary Agnes, it was, of all people, the committee chairman, Max Baucus. What happened?

MARY AGNES CAREY: Well, he’s very, very concerned about the implementation of a provision in the health law called the exchanges. These are health insurance exchanges where individuals and eligible small businesses can apply to get coverage. They can start applying this fall; coverage starts in 2014. He said, based on what he’s heard from his constituents back home in Montana, people are confused. They don’t understand how to enroll in the exchanges, they don’t understand the regulations behind them, how they’ll benefit their businesses or their lives, and he basically said he sees a train wreck coming at this point.

JACKIE JUDD: And what did Sebelius say? Basically what Baucus was telling her was he doubted the exchanges would ready for enrollment in October.

MARY AGNES CAREY: Well, he’s very concerned that they won’t be ready. What she countered with is she talked about an announcement the Department of Health and Human Services made last week to fund grants for things called “navigators.” These are people that can help individuals and small businesses figure out how to apply for the exchanges and how to navigate them, so she said, those grants had been placed out — people are going to apply for them.  But then Sen. Baucus and Secretary Sebelius got into kind of an exchange about specifics.

He said: How many navigators will you have, when and where? And she said: I don’t know yet.

He very clearly wants more specifics as soon as they can deliver on this issue.

JACKIE JUDD:  He was a key architect of this law. Has he let loose like this before?

MARY AGNES CAREY:  I have not seen that. He isn’t shy about expressing his opinion. He tends to be more measured. But he was visibly angry and frustrated today. And, as you note, he was a key architect. He was a key cosponsor. And he’s got a lot on the line here.

He really worked hard to pass this law, and he just says that he wants the exchanges to be simple and easy for people to understand, and he doesn’t think it’s heading that way.

JACKIE JUDD:  Did any other Democrats or Republicans on the committee join in this?

MARY AGNES CAREY:  It’s interesting: They really didn’t. Orrin Hatch, who is the ranking Republican, was concerned about the president’s budget. Of course, HHS is part of that budget. [Sen. Hatch said the budget] didn’t do enough to control entitlement spending. And members on both sides of the aisle framed their questions around their particular interests: Funding for teaching hospitals or for something called critical access hospitals, or the navigator program and how it impacts insurance brokers and agents.  But they did not really jump on the Baucus train, if you will, with his line of questioning.

JACKIE JUDD:  You caught up with the secretary immediately after the hearing. What did she have to tell you?

JACKIE JUDD:  And we should say one of the reasons the federal government is under so much pressure itself with the exchanges is, it is launching them in many more states than they had anticipated having to do.

MARY AGNES CAREY:  That’s right. They anticipated that states themselves would say: We want to run that exchange. But in many states they did not.