The Affordable Care Act lies at the center of a last minute push to fund the government past Sept. 30. Mary Agnes Carey and Politico Pro’s Jennifer Haberkorn discuss how the standoff is likely to be resolved.

>> Listen to audio of this interview

MARY AGNES CAREY: Welcome to Health on the Hill. I’m Mary Agnes Carey. The Senate continues to debate a measure that would defund President Obama’s health care law and prevent a government shutdown. Senate Democrats are expected to have enough votes to block Republican efforts to cut off funding for the Affordable Care Act and then send the measure back to the House of Representatives for further action. In the House, Republicans are planning their next move.

Do they continue to try to defund the health law and risk a government shutdown, or do they wait and revisit that fight when Congress turns to the next big battle: raising the nation’s debt limit. Politico Pro’s Jennifer Haberkorn has been following the story and is with us now to discuss the details. Thanks so much for joining us. 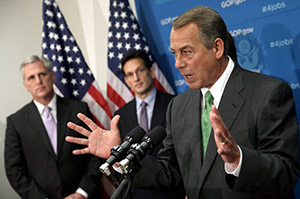 JENNIFER HABERKORN, POLITICO PRO: Thanks for having me.

MARY AGNES CAREY: The current continuing resolution, also known as the CR, is set to expire on Sept. 30, just four days from now. What’s the latest on the Senate debate?

JENNIFER HABERKORN: Well, now the Senate leadership has come together, and they’re trying to move quickly – potentially voting as soon as today to give the House more time to act. So they would get through their votes to remove the provision that would defund the health law and send a so-called “clean bill” back to the House. And that would give the House enough time to try to get something passed and back to the Senate before the government runs out of money on September 30.

MARY AGNES CAREY: And once that bill goes back to the House, how will Speaker John Boehner proceed? What are some of the options that he and other Republicans are considering?

JENNIFER HABERKORN: The House is still trying to figure that out. They feel like they need to get some kind of concession out of the health law before they’ll fund the government. One thing on the table right now is a one-year delay of the individual mandate. That does not appear likely to pass the Senate, which is controlled by Democrats. The House could also decide to push this bill forward, allow the government to be funded and take this fight to the next big fiscal discussion, which would be the debt ceiling.

MARY AGNES CAREY: So at this point, Jennifer, what’s your best guess? Do you think we’re going to have a government shutdown? If we did, how long might it last?

JENNIFER HABERKORN: It’s hard to know. Congress does seem to get its act together at the very last minute, so we’ll probably not know for sure until about 8 p.m. on Sept. 30.

I’d say that the government probably will not shut down. I think both parties know that’s way too risky. It’s hard to know who would actually get blamed for that situation. If it did shut down, thought, I don’t think it would be very long. I just think neither party wants to be responsible for all the repercussions of the shutdown.

MARY AGNES CAREY:  If we did have a shutdown, that would coincide with the opening of the health law’s online marketplaces, also known as the exchanges – because they open up on Oct. 1.

What would be the impact of a government shutdown on the exchange enrollment?

JENNIFER HABERKORN:  Technically, not much. Much of the funding in the health law has already been established, it’s “mandatory money” in government terms. But politically it would not be good for backers of the health law. It would set a tone of the government not answering its call centers and helping constituents — and I think, most importantly, it would move the media story away from: The exchanges are open.

The White House really sees Oct. 1 as an opportunity to get a lot of media attention and drive people to the exchange websites to at least check out what’s available. And, if the number one story on Oct. 1 is a government shutdown, that’s going to move the story away from Obamacare.

MARY AGNES CAREY:  You mentioned a moment ago that Republicans might wait until the debt ceiling battle to revisit the whole Affordable Care Act defunding issue.

Might they also look for some cuts in federal entitlement programs like Medicare as part of any deal to lift the debt ceiling?

Of course, the health law is going to be at the top of that list. But other things on the table include additional means testing in Medicare, medical malpractice reform — which is a favorite health program for Republicans. Also reducing the Disproportionate Share Hospital payments or eliminating the health law’s Prevention and Public Health Fund.

We’re likely to see some of that in the mix, at least in the negotiations. But it’s too early to know exactly what exactly will be in there.

MARY AGNES CAREY:  We’ll stay tuned. Thanks so much for the help, Jennifer Haberkorn of Politico Pro.

Obamacare In Middle Of Countdown To Possible Shutdown On Capitol Hill