Your browser does not support the audio element.

MARY AGNES CAREY:  Welcome to Health on the Hill. I’m Mary Agnes Carey. The flawed implementation of healthcare.gov continues to be a focus for House Republicans, with three committees holding hearings today on various aspects of the health law’s roll out. Melissa Attias, a health care reporter for CQ Roll Call, attended one of those hearings and joins us now. Melissa thanks for being with us.

MELISSA ATTIAS: Thanks for having me. 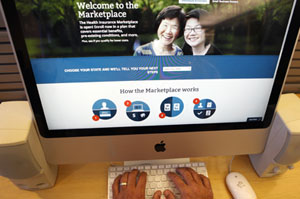 A man looks over healthcare.gov in New York in this October 2013 photo illustration (Photo by Mike Segar/Reuters).

MARY AGNES CAREY:  You attended a House Energy and Commerce subcommittee hearing, where Gary Cohen, who’s in charge of the ACA’s online exchanges, was the sole witness. Now just weeks before those exchanges launched, Cohen told that same subcommittee that healthcare.gov, the health law’s website, was ready to start enrolling consumers on Oct. 1. As we know now, the site had a variety of problems; how did he explain that?

MELISSA ATTIAS:  Cohen said he gave the best information he had at the time, but that the problems were way bigger than anyone had anticipated. And he talked about how he received regular briefings on the website and made sure that he got a thorough briefing before he actually testified before Congress in September because it was so close to the start of open enrollment on Oct.1 and he knew that question would be raised. He also said he heard a lot from Henry Chao, who is the deputy chief information officer at CMS. So basically he admitted that he was wrong, but he said that was what he understood based on what he was told at the time.

MARY AGNES CAREY:  Now today Gary Cohen made it clear that many of the site’s problems have been remedied, but some still remain. What are those issues, and what are they doing to fix them?

MELISSA ATTIAS: Cohen said that issues related to financial management are still a big issue.  He said that they still did not have full functionality for the automated payment system that they’re building, and he said that there is no anticipated timeline for finishing that at this point.  In the meantime, he said they’re using a process based on insurer’s records rather than those coming from the insurance exchanges.  He also talked about how we still don’t have data on who has actually paid for their plan and we still don’t know the number of enrollees in the exchanges who didn’t have coverage before.

MARY AGNES CAREY:  He gave no timeline on when they’re going to know all that information?

MELISSA ATTIAS: Right, he said there was no timeline for when the full functionality of the payment system would be in place.

MARY AGNES CAREY: He also talked about new efforts from the administration to increase enrollment and to do some advertising specially geared to younger people.  What are those advertising campaigns?

MELISSA ATTIAS: Right, the advertising campaigns came up at several points during today’s hearing. He talked about these new television ads that were actually announced today with Magic Johnson and Alonzo Mourning. The administration said they know that young people respond to sports figures. He also talked about how they plan to do advertising during the Olympics and also use social media. And he mentioned how the administration and insurers were reticent to start with the advertising when the site was not working well, but it’s picking up now that things have improved.

MARY AGNES CAREY:  You talked a moment ago about [how] this wasn’t the only hearing going on the House on the ACA. What were the other committee hearings, and what did they focus on?

MELISSA ATTIAS:  The House Oversight and Government Reform Committee also had a hearing this morning. It was focused on security concerns, and they heard from two chief information security officers from the Obama administration.

This morning the House Science, Space and Technology Committee had a hearing on the potential for stolen identities through the healthcare.gov website and spoke with cybersecurity experts.

MARY AGNES CAREY:  And in addition to the hearings, the House also approved legislation that require weekly detailed reports on how many people have enrolled in the health law — and as we know the administration does these now on a monthly basis.

From your watching all this, what do you think these hearings mean? What does the floor vote mean for future Republican interest in the Affordable Care Act, especially as we head into a midterm election?

MELISSA ATTIAS:  I think all these things show that Republicans aren’t going to give up their attention on the health care law any time soon. They’re going to be continuing their oversight. And it was actually reported today, also, that House Speaker John Boehner said that Republicans may come forward with a replacement plan for the health care law this year. And Congressman Paul Ryan has also talked about how he is working on a replacement plan.

So I expect to see all this attention from Republicans on the law continue.

MARY AGNES CAREY:  So it sounds like we’re going to be pretty busy.

MARY AGNES CAREY:  Thanks so much for joining us, Melissa Attias of CQ Roll Call.