>> Click here to listen to audio of the conversation

Testifying before a House subcommittee, a key Obama administration official lays out the updates that HHS is making to the online marketplaces before enrollment begins in November. Mary Agnes Carey and Politico Pro’s Jennifer Haberkorn discuss.

MARY AGNES CAREY: Welcome to Health on the Hill, I’m Mary Agnes Carey. With the health law’s open enrollment season just months away, a key Obama administration official was on Capitol Hill today to discuss ongoing efforts to fix problems with healthcare.gov. Politico Pro’s Jennifer Haberkorn was at that hearing and joins us now. Thanks for being with us. 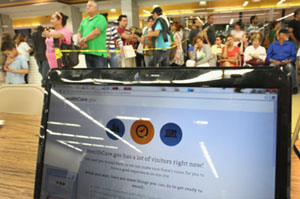 MARY AGNES CAREY: Andy Slavitt, who is principal deputy administrator for the Centers for Medicare & Medicaid Services, gave members of the House Ways and Means Health Subcommittee an update on the work that his agency has been doing to improve healthcare.gov. What did he say would be different when enrollment begins again in November?

JENNIFER HABERKORN: Andy Slavitt said that the application process is going to be a little more streamlined. There isn’t going to be much of a difference in consumers’ eyes in what they enter into the website. But it’s supposed to be easier for the information to get from point A, which is the consumer, to point B, the insurer. And that’s supposed to ease some of the problems that we saw last year — once the website was working, there was still some issues getting that information across. Consumers are also going to use it to re-enroll, which is obviously an issue that they did have to confront last year. This is people who are choosing a new plan, that looked ahead last year or are just trying to stay in their same plan as last year. We don’t know exactly yet what that’s going to look like, but it is an issue that the administration is going to have to confront because they’ll want those people to remain on the rolls in the second year of enrollment.

MARY AGNES CAREY: Typically these health law hearings are extremely combative with Republicans blasting the law and the officials that are implementing it. But the tone of today’s session seemed different. Was that your sense as well?

JENNIFER HABERKORN: Yeah, I definitely noticed that this year it was toned down. You definitely get a sense that the administration is at least trying to work with Congress a little bit more. Trying to tell them “We’re going to be transparent. We’re going to talk to you. We’re going to give you a heads up when there are problems.” I think we have yet to see whether that’s actually going to come to fruition, but Slavitt today was talking a lot about that and we saw the HHS Secretary Sylvia Mathews Burwell say the same thing earlier this week and she [may have] done the same thing in her conversations with Congress.

Slavitt interestingly did not make a promise today that the website was going to work seamlessly, but he did say that they’re doing all the ground work now to hopefully try to get a website that works properly.

MARY AGNES CAREY:  I think one of his phrases was “improvement but not perfection.”

JENNIFER HABERKORN: Yeah, and I think that’s going to be the theme of what they talk about in the next few months. I think they’re very worried about promising too much. Because you know a year ago, the administration was saying this was going to work, and then we saw that it didn’t work, so I think they are very concerned about keeping expectations low.

MARY AGNES CAREY:  Back to today’s Ways and Means hearing, IRS Commissioner John Koskinen was also there. He got a lot of questions from members, both Republicans and Democrats, about what happens if someone gets too large or too small or simply gets a subsidy in error. What happens then if that’s the case?

JENNIFER HABERKORN  Yeah, this is a big point. I think it’s going to be a significant protocol issue for the ACA over the next several months. Many of the members today were concerned that people were going to get a huge tax bill next year because they put their income in wrong, whether maliciously or not and got too large of a subsidy. That’s because if someone told an application counselor say last November that they made $40,000 so they would get a subsidy.  But later they got a huge raise or got a new job and made $60,000. They would qualify for less of a subsidy. So if they didn’t tell the IRS about that, come April they are going to owe a significant amount of money in subsidies that they weren’t supposed to get.

And the concern is that people who don’t realize this are going to blame the tax repayment on Obamacare and it’s going to kind of drive home the Republican opposition to the law on the whole. So the IRS is saying that they are trying to notify consumers that if your income changes, you do have to notify them and that you do have to make sure that your subsidy gets changed. We still have to see whether that’s effective and whether people are actually doing that. I think this is going to come to a head next April when people are filing their taxes for the first time. One interesting thing to note, I think, is that if you get a subsidy you often can’t use the 1040EZ forms to file your taxes, which is what a lot of people use. And that might be a surprise to consumers in April.

MARY AGNES CAREY:  How many Americans are affected by this? What happens, for example, for someone who currently has health care insurance? What happens when they file their taxes?

JENNIFER HABERKORN:  Well, for the vast majority of people, you just have to check a box saying you have coverage. The IRS commissioner told the committee today that of the 150 million people who file tax returns, 125 million simply have to check that box that says “I have coverage,” and essentially it’s over for them.

That’s at least 25 million people, likely those who have complicated tax situations or a big income change to deal with this potential problem. And this is the first time this is going to take place, so we really don’t know how many people this could be an issue for when they go to their tax adviser.

MARY AGNES CAREY: You covered last year’s roll out of healthcare.gov, what do you think will be the same or different this fall?

JENNIFER HABERKORN:  I think it really can’t be worse for this administration that it was last year. As you remember, it was really bad for them. The website didn’t work for two months. I don’t think we’re going to see the same thing this time. I think the administration is going to work hard to downplay expectations but to make sure the website is working.

And I think the message is going to be a little different. Last year, there was so much attention on the flaws of the website and it really did a lot to educate consumers that this Affordable Care Act exists. It will be interesting to see how the White House knows that people know about this again so that they sign up againand that they get the millions of people they want to enroll the second year for the first time to actually do so.

MARY AGNES CAREY: Thank you so much, Jennifer Haberkorn of Politico Pro.

HHS Official: Healthcare.gov Updates Will Be ‘Improvement But Not Perfection’