KHN’s Mary Agnes Carey and Politico Pro’s Jennifer Haberkorn detail the deal struck between President Obama and Congress to avert the so-called “fiscal cliff” and what the compromise means for hospitals and doctors who serve Medicare patients.

> > Listen to audio of the interview

MARY AGNES CAREY: Good day, I’m Mary Agnes Carey and this is Health On The Hill. A last-minute deal between President Obama and Congress to avoid the “fiscal cliff” – a series of tax hikes and spending cuts – includes several key items for Medicare and the 2010 health care law. With us now to discuss the details is Jennifer Haberkorn of Politico Pro. Thanks, Jennifer, for joining us.

MARY AGNES CAREY: The deal between the president and Congress would stop a 26.5 percent pay cut for Medicare physicians that was scheduled to begin on Jan. 1. How long does this “doc fix” — as we call it – last? And how does Congress pay for it?

JENNIFER HABERKORN: This will last for one year, so it will put off this payment cut that you mentioned – 26.5 percent – for a year, and we’re likely to come back and have the same attempts to stop another pay cut a year from now. It’s paid for by a combination of cuts to the health care industry, mostly hitting hospitals that take Medicare patients. 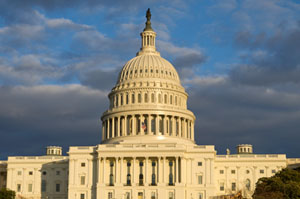 There are some small bites at the Affordable Care Act in there, too. The biggest pay-for – as they call them on Capitol Hill – are hospital payments. These are old payments under Medicare that will bring in about $10.5 billion, and then there’s another hit to hospitals, disproportionate share hospitals, hospitals that take a disproportionate share of charity and low-income patients. And that brings in another $4 billion. Then there’s another combination of smaller cuts that the hospital industry so far, they say that they don’t really like them, that they’re being hit disproportionately, but when the “fiscal cliff” negotiators got toward the end of the line, these were the easiest cuts to make.

MARY AGNES CAREY: As you mention, the hospitals are very unhappy about their share of the financing, and if my numbers are correct, they are picking up about half the tab. So what’s their case against this?

JENNIFER HABERKORN: They say that under the health care reform law, which passed almost three years ago, that they put in a large share of the payment for that and that they shouldn’t have to continue to pay for other parts of the health care industry. Each year, it seems, they’re continuing to have to put up more money, in part to pay for this “doc fix” that comes up. So they say: Stop doing [these] piecemeal cuts to us, and if you want to do real policy, real changes to the way that they’re paid, do that in one comprehensive package.

MARY AGNES CAREY: So they want a permanent fix to something called the SGR – the “Sustainable Growth Rate” – but that’s really expensive isn’t it?

JENNIFER HABERKORN: Yes, that would cost upwards of $200 billion. When we’re talking about the deficit reduction talks that are going on right now, it’s almost unfeasible that Congress would put up that kind of money to get rid of this problem. But it keeps coming up. This year, it cost them $30 billion. Next year, it will cost a little more to put off these cuts. No one is going to let these cuts go through to the doctors, because they worry that Medicare patients – the seniors who vote in higher numbers than anyone else – they don’t want to get them angry. So, these cuts need to continue to be put off, but it just gets more and more expensive every year.

MARY AGNES CAREY: The American Medical Association and some other physician groups, while they’re happy that their payments didn’t get cut now, they’ve also expressed frustration with this process.

JENNIFER HABERKORN: Right. They’re just as frustrated as lawmakers that the system was set up in the late 90s, and everyone thought it would be a good system, but now it calls for 20-plus percentage cuts to doctor payments that no one likes. The SGR formula has no support on Capitol Hill, but no one yet has come up with a way to pay for it yet that would pass Congress.

The doctors say: “Look, you guys set up this problem. It’s not our problem. But you guys have to deal with it, and we’re sick of paying for it.”

MARY AGNES CAREY: Let’s talk a little bit about the 2010 health care law. This deal also impacts the health law. Tell us how.

JENNIFER HABERKORN: The deal permanently repealed the CLASS Act. This was Sen. Edward Kennedy’s final legislative push to insure long-term care for people. The health law was supposed to put this into effect. The Obama administration said about a year ago that it wouldn’t be actuarially sound, so they would not implement it. Republicans, presumably, pushed to get this included in the deal as a flag that they can wave to say: “Look, we got a piece of the health care law repealed.”

It will have no practical effect, because the administration said they wouldn’t put it into effect anyway. But Republicans will say that they had a victory. It also would put a long-term care commission in place, presumably to come up with an actuarially-sound alternative to the CLASS Act.

The deal would also take about $2.3 billion out of the law. The law is programmed to set up co-ops. It was never an extremely popular idea, but it was included in the law so that, particularly in rural areas, co-ops could be set up for health insurance.

JENNIFER HABERKORN: Right. Congress said in this deal that any money that has not been sent to a co-op so far is not going to be sent out. That money is going to go toward deficit reduction.

MARY AGNES CAREY: Let’s move to another part of this deal: stopping something known as sequestration, a series of automatic across-the-board spending cuts were supposed to kick in at the first of the year. What does this mean for federal entitlement programs, and how long does this sequestration patch last?

JENNIFER HABERKORN: Sequestration was supposed to go into effect Jan. 1, and it would have across-the-board cuts. Medicaid was almost completely protected, and Medicare would be limited to 2 percent cuts. But other part of the health industry would be impacted if sequestration had gone into effect. National Institutes of Health, for instance, would get a big cut.

Sequestration has been put off for two months, so presumably we’re going to be having a very similar fight that we just had in the few weeks at the end of February. The health industry is going to be fighting the same battles. They’re going to be pushing to insure that they are not cut to pay to delay sequestration even further. It’s unclear at this point whether lawmakers are going to push sequestration off for a year or just a couple of months – or if we’re going to be continuing to kick this can further down  the road.

MARY AGNES CAREY: Thank you so much Jennifer Haberkorn of Politico Pro.