Republican and Democratic leaders from both chambers of Congress this week offered competing budget proposals that both look for savings in health care. KHN’s Mary Agnes Carey talks with Jackie Judd about what’s next for the proposals, and what President Obama could offer himself.

> > Listen to audio of their conversation here.

JACKIE JUDD: Good day, this is Health on the Hill. I’m Jackie Judd. Congressional budget leaders have now laid out their vision for federal spending over the next decade. House Budget Chair Republican Paul Ryan outlined a familiar budget yesterday, and Senate Budget Chair Democrat Patty Murray did the same today. Describing the distance between the two proposals, one journalist, said, “It is not even apples and oranges, it’s apples and bicycles.” Senior Correspondent for Kaiser Health News Mary Agnes Carey is here. How different are they? 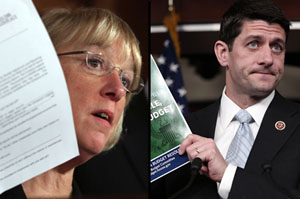 MARY AGNES CAREY: I think they’re extremely different. I really look at this as the tale of two conflicting budgets. Patty Murray talks about health care savings, but wants it in a way that doesn’t harm seniors or their families. [She] doesn’t want any changes to Medicare, nothing that would, in her words, “dismantle” or “voucherize” Medicare.

She would preserve the 2010 health care law. Paul Ryan, by contrast, the House Republican Budget chair, would repeal the health care law — keep the Medicare savings, but repeal the law itself. He would bring back his premium support plan that would change the way seniors currently get their health care.

They would get a set amount of money and they could buy a plan that costs more or costs less, it would be up to them. He would block-grant the Medicaid program. He would raise the Medicare eligibility age. So you have two very different visions.

JACKIE JUDD: Now, let’s introduce President Obama into this. He sends his budget up to Capitol Hill next month. He met with Senate Democrats this week. What hints did he give about, number one, what he expects of them, and number two, what his budget will look like?

MARY AGNES CAREY: He talked about entitlements, trying to make Democrats understand that if Republicans move on the revenue — and let’s be clear, they’ve said they don’t want to — but if the Republicans will move on revenue, Democrats have to be ready to move on entitlements.

And he got some immediate pushback. You mention his talk with the Senate Democrats. Tom Harkin of Iowa, Bernie Sanders of Vermont — some of the more liberal members of the Democratic caucus — pushed back and warned the president to move very carefully if he’s going to include Medicare as part of any grand bargain plan.

JACKIE JUDD: Big gulf here, as you’ve described. Do you, as a long time Capitol Hill reporter, see any nuance — any statement — that makes you think there may be room for future negotiation and compromise?

MARY AGNES CAREY:  I’ve been running that exact scenario past many of my sources. I usually get a shrug and an answer to the effect of: Who knows?

But everyone seems to look at some of these elements as potential movement. For example, we talked about Patty Murray trying to move a budget in the Senate. That hasn’t happened since 2009. She’s trying to move that process forward. As we know, it is moving forward in the House. You mentioned the president. He’s meeting on Capitol Hill in both chambers with both parties to try to get people to meet to the middle.

As we’ve noted, it cannot be underscored how far apart both sides seem now, but it’s March. People can change their minds. And if there’s any hope of a larger deal, it would really, I think, have to happen now. We’re a year past the presidential and congressional elections. We’ve got a mid-term election next year. So this would seem to be the year, if they’re going to move to any broader compromise on taxes, on entitlements and federal spending — it would have to happen now.

JACKIE JUDD:  And the consequences if there is not a deal?

MARY AGNES CAREY:  Life goes on. The implementation of the Affordable Care Act would continue, which – even though Republicans would like to stop that — it probably will continue anyway. Medicare spending continues on the same path, Medicaid on the same path. And Congress has to continue to pass some measures to fund the government, and they would have to raise the debt ceiling at some point.

So life goes on. There aren’t major things stopping if they don’t pass a budget. Nonetheless, there’s a lot of emphasis on it and attention to it this year.

JACKIE JUDD:  And, as you mentioned, implementation of the ACA, the health overhaul law, continues, becomes more entrenched into the system, despite Paul Ryan’s call for it to be repealed.

MARY AGNES CAREY:  We will see, whether it is on the debate on the budget, or, more immediately, the continuing resolution, this piece of legislation to fund the government beyond the end of March. You will see Republican amendments repeatedly to defund the ACA. And while previous efforts on this have failed — and as we know the Supreme Court upheld most of the provisions in the ACA — Republicans say they want to use every opportunity they have to tell the American public the flaws of that they think exists in the 2010 health care law and what they would do to replace it.