The Health and Human Services secretary also said she couldn’t give firm numbers on how many people have enrolled for health insurance using the website because the data are not yet trustworthy. KHN’s Mary Agnes Carey and CQ Roll Call’s Emily Ethridge discuss. A transcript follows:

>> Listen to the conversation. 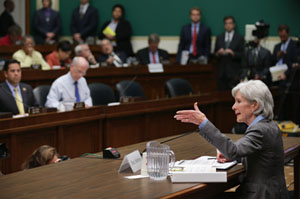 Health and Human Services Secretary Kathleen Sebelius testifies before the House Energy and Commerce Committee about the troubled launch of the Healthcare.gov website October 30, 2013 in Washington, D.C. (Photo by Chip Somodevilla/Getty Images)

It was the second time this week that a top Obama administration official appeared on the Hill to answer questions about the flawed launch of healthcare.gov. CQ Roll Call’s Emily Ethridge was there and joins us now. Emily, thanks for taking time to talk with us.

EMILY ETHRIDGE, CQ ROLL CALL: Thanks for having me.

MARY AGNES CAREY: Secretary Sebelius faced a lot of questions from committee Republicans, and she did provide some new details about decisions that were made before the site’s launch on Oct. 1. Can you go through some of those with us?

EMILY ETHRIDGE: Yeah. One of the interesting things was that Sebelius took full responsibility for the law overall and the website rollout. But, she also gave us some specific details about who on her team made decisions. For example, she said that Marilyn Tavenner, the Centers for Medicare & Medicaid Services administrator had made the decision to turn off a browsing feature on the website. That decision has been blamed for some of the website’s delays and problems. She said that CMS made the decision to delay other parts, like the Spanish-language website, and other elements of the site. She said they made those decisions because they were worried the site wouldn’t work very well. And she said it’s ironic that we did that and it still ended up not working very well whatsoever. She also said that despite these problems, or despite concerns that this might be a problem, none of the contractors and none of the administration officials recommended to her that the Oct. 1 start date be delayed.

MARY AGNES CAREY:  She also provided some new details about the cost: How much has been spent; how much they anticipate spending. Can you go through some of those for us?

EMILY ETHRIDGE:  Sebelius said that about $118 million has been spent on the website itself, and about $56 million has been spent on IT support for the website. She also went in a little bit about some of the contractors, CGI, which is in charge of the entire website application, has a contract of $197 million. Not all of that has been obligated yet. That contract lasts through March 2014. So, they’ve only spent about $100 million. She said, in any case, if the contractor doesn’t really do the work that it’s supposed to do in the contract, they would not have any problem trying to renegotiate the terms of that contract. And also, QSSI, which has now been put in a larger role, basically renegotiating the terms of its contract, now that the administration asked it to do more assistance with improving parts of this website.

MARY AGNES CAREY: Let’s talk for a moment about enrollment numbers. This was a key line of questioning yesterday when Marilyn Tavenner was in front of the House Ways and Means Committee. Secretary Sebelius was also asked about that today, and also Republicans asked her to release the federal contractors from their pledge of confidentiality with the government, to let them share with the committee what they know about enrollment. How did she answer those questions?

EMILY ETHRIDGE: Sebelius said that we can’t share those enrollment numbers yet, and we can’t let the contractors let the numbers out because the data that they have is not reliable. She said that any numbers that anyone has — that insurers have, that the contractors have — are not reliable data and not reliable figures. That’s why she is refusing to share them. It was interesting, we heard before from other administration officials, that we’re not going to give you those numbers until mid-November. You have to wait until mid-November. But Sebelius is the first one who said “Here’s why you can’t have those numbers. It’s because we don’t have good numbers yet. We don’t actually know and no one knows what the enrollment numbers are.”

MARY AGNES CAREY: Another issue that was talked a lot about today, also mentioned yesterday, was this cancellation of plans for individuals that purchase in the individual market. Are there any particular numbers, do we know any more about how many plans have been discontinued and also this idea of grandfathered plans are allowed to remain in the market but if plans make certain changes they can no longer be grandfathered and have to conform to the standards in the Affordable Care Act?

EMILY ETHRIDGE: Right, this is a big concern for Republicans who are hearing from a lot of their constituents that their current policies are being canceled, including Republican Rep. Cory Gardner of Colorado, who has actually had his own policy canceled so he is particularly concerned about this. We don’t know how many people are losing their plans. We do know, Sebelius said, there are about 12 million people who are on the individual market, but she noted that not all of those people are going to lose their plans, in part because a lot of them have grandfathered plans. What that means is if you had an insurance plan before the health care law was enacted in March 2010 and you haven’t dropped that plan and that plan hasn’t changed significantly, it’s grandfathered. It doesn’t have to meet the requirements of the law. However, if you had that plan and your plan does change, the administration then makes it abide by the requirements of the law, and that, maybe, is when some of these plans get canceled, get modified — that’s when people are losing their current coverage, and a lot of people are upset about that.

MARY AGNES CAREY:  Security of data on the site was another question today. Mike Rogers is on the Energy and Commerce Committee. He also heads the House Select Committee on Intelligence. He seemed very concerned about the lack of testing on security, about how the website is rewriting data overnight and not testing it, and how the site might get hacked.

EMILY ETHRIDGE: Right. Mike Rogers said that as the site is getting new code added to it, he said you need to do end-to-end testing, complete testing of the entire system every time you add new code, to make sure there are no vulnerabilities. Secretary Sebelius said they are doing simultaneous testing; they are doing continuous testing as it is being added. But she didn’t say that they are doing that full, end-to-end testing that Mike Rogers wants to have. He asked her to take the whole site offline while they do that testing. She didn’t say that she would.

Chairman Fred Upton said after the hearing that the committee will send out a letter today asking some followup questions about the security, because they are very concerned about the privacy of people’s information once it’s in these websites.

MARY AGNES CAREY: These aren’t the end of the hearings. There is more ahead next week in the Senate. Which committees are having those hearings?

EMILY ETHRIDGE: Yes, and we are all very excited. The Senate Health, Education, Labor and Pensions Committee will have a hearing on Tuesday with Marilyn Tavenner from CMS. And then on Wednesday Secretary Sebelius will be back up, and she will be testifying to the Senate Finance Committee. It might be a little easier — in that Senate committees are run by the Democrats. So it might not be a fiery as we saw today.

MARY AGNES CAREY: Thanks so much Emily Ethridge, CQ-Roll Call.