Jackie Judd talks with KHN’s Mary Agnes Carey about the super committee’s public hearing Tuesday when it heard from the leaders of previous deficit reduction groups. 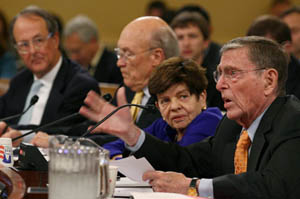 JACKIE JUDD: Good Day, this is Health on the Hill. I’m Jackie Judd.

The super committee held another public session today, hearing from the former chairs of two national commissions on deficit reduction: former Senators [Pete] Domenici and [Alan] Simpson and the former Clinton administration officials Erskine Bowles and Alice Rivlin.  KHN senior correspondent Mary Agnes Carey is on Capitol Hill. Mary Agnes, you listened to the hearing this afternoon – what did you hear of note?

MARY AGNES CAREY:  There’s still wide disagreement between Democrats and Republicans on the committee on how to proceed.  Republicans said repeatedly the entitlement programs, Medicare and Medicaid, are a problem.  If you don’t overhaul those programs, you’ll never reduce the deficit.  Democrats were just as adamant in pushing for the balanced approach to increase revenues and to change entitlement programs.  We’ve been at this place for weeks, and it just doesn’t seem like they’re growing any closer to an agreement

JACKIE JUDD:  So many of the questions that were put to the four witnesses today seemed intended,to your point, to reinforce what the committee members already believe.  So did this hearing push the process forward in any way, particularly when it comes to health care spending?

MARY AGNES CAREY:  I think it did underscore the difficulties that are ahead as you look at entitlement programs and try to make changes.  There was a lot of discussion about premium support or Medicare support programs that would give beneficiaries a set amount of money that would let them choose Medicare fee-for-service versus private plans, for example.  A lot of discussion about, well, what would happen if you raise the eligibility age, or you combine a Medicare A and B deductible, or you don’t allow first dollar Medigap coverage in Medicare?  There was sort of a fleshing out, if you will, of ideas.

JACKIE JUDD:  Did any of the committee members seem interested in that idea?

MARY AGNES CAREY:  They didn’t at the time, and they didn’t jump on it.  And I wondered about that.  I think that there’s a feeling that that would look like the super committee didn’t deliver and they didn’t do what they had to do.  But if you also think about it — how difficult would it even be for the Ways and Means Committee — or in the Senate, the Finance Committee itself — to write a tax law change in this short of a time to work.  So I’m wondering if they possibly would think it over, but the counterpoint is that it would look like they punted, which may not be satisfactory to the public or to the financial markets.

JACKIE JUDD:  And to that point, it seemed like there was a sobering moment in the hearing when Erskine Bowles basically warned the committee that there are consequences to failure.  He said we would be viewed as a second-rate power.

MARY AGNES CAREY:  Exactly.  Alice Rivlin said something later on that really was a jolt of reality, I think, not only for the super committee members but for people in the room.  With some of the crises over at the different European countries, the crisis in the markets, I think the Standard and Poor’s has already downgraded the U.S. credit rating – nobody wants to see that happen again.  And there is a great fear that if the super committee doesn’t deliver and Congress doesn’t take action, some of those consequences will absolutely happen.

JACKIE JUDD:  Mary Agnes, let’s move away from the hearing for a moment.  There was a story today, Reuters wrote a story that a subset of the twelve committee members – that six of them, both Democrat and Republican – have gathered themselves in hopes of coming up with some kind of deal that can pass the full committee.  What do you know about that?

MARY AGNES CAREY:  I haven’t been able to verify it. But it’s not uncommon, for example, in a panel this large to have a subgroup of people that are trying to drill down and to ask specific questions and to try to get an answer.  You can see little remnants of that today in the hearing.  John Kerry, for example, the senator from Massachusetts, a Democrat, asked about what sort of structural reforms could happen to Medicare. This is typically an area that Democrats don’t want to do a heck of a lot on, especially in an election year, but he seemed to sort of signal, perhaps, that would be an area worth looking at.

JACKIE JUDD:  And he is one of the six?

MARY AGNES CAREY:  He is one of the six, according to the story.  Another one of those six individuals, according to the Reuters report, is Rob Portman, a Republican senator from Ohio. He talked about means testing.  As we know, it already exists in the Medicare program for Part B and Part D, but he was saying this is an area where Democrats and Republicans could really come together; maybe we should try to look to that area for savings.  So perhaps they are trying to get a breakthrough package to bring to the larger committee.

Health On The Hill: Budget Experts Warn Super Committee About Consequences Of Failure