Listen To The Audio

JACKIE JUDD: Good day, this is Health on the Hill. I’m Jackie Judd. The House Ways and Means Subcommittee on Health led by Republican Congressman Kevin Brady heard testimony today about whether and how traditional Medicare should be redesigned. In his opening statement, Brady said the health care law is keeping Medicare in the last century instead of modernizing the almost 50-year-old program. Senior Correspondent for Kaiser Health News Mary Agnes Carey covered the hearing. Mary Agnes, welcome. Give us the overview. 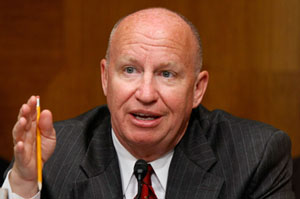 MARY AGNES CAREY: I got a strong sense today that members on both sides of the aisle were trying to get what they could from the witness panel – that were all Medicare experts – about what would be some of the impacts if you tried to change the design of traditional Medicare. Again, this is Medicare fee-for-service, where 75 percent of the beneficiaries get their coverage. Kevin Brady, as you mention, the subcommittee chairman, he’s a big fan of the Medicare Advantage program. He thinks traditional fee-for-service [Medicare] could learn some lessons from Medicare Advantage. Not everyone necessarily agrees with that, but it was a real kind of a nuts-and-bolts session looking at the benefits or the consequences of changes to fee-for-service.

JACKIE JUDD: Did the Republican members or the Democratic members say anything that would surprise you?

MARY AGNES CAREY: Not necessarily. The Democratic members, for example, are fond of the Affordable Care Act, the 2010 health care law. The ranking Democrat, Jim McDermott, talked about how the ACA has reduced Medicare spending, it offers seniors preventive services for free, it puts the groundwork there to reward the quality of the service provided versus the quantity.

The Republican side of the aisle, of course, along with Kevin Brady, they’re big fans of Medicare Advantage. But there was an interest to try to explore different ideas that perhaps you wouldn’t have heard six months ago, when we were in the heat of an election season.

JACKIE JUDD:  Such as?

MARY AGNES CAREY:  For example, what really happens if you add copays in traditional fee for service that haven’t existed? What kind of effect does that have on the beneficiary. The average income of a beneficiary is about $22,000 a year.  Half of them spend something like 15 percent or more of their income on medical services.  So if you increase copays, if you, for example, add a new out-of-pocket limit, the level you set there would tell you how many beneficiaries would benefit by it. What would it mean to actually pay a physician in Medicare to sit down and talk to a patient about different treatment options where some of those reimbursements don’t currently exist.  What impact could that have?

JACKIE JUDD:  Mary Agnes, this hearing is taking place at a time when the politics are particularly charged. In a couple of days, there will be sequestration unless a deal is reached. So what was the atmosphere? What was the discussion like between the opposing sides at this hearing?

MARY AGNES CAREY:  It was almost as if those outside pressures that you mentioned – sequestration and the continuing resolution expiring at the end of the month – that they weren’t there. It was a real nuts and bolts look at potential changes to the Medicare program. Some may be beneficial to beneficiaries; some may not. But you got the sense that members were digging in on the policy, so if changes to Medicare were considered at some point as part of a larger deficit-reduction package, they would be ready for that debate.