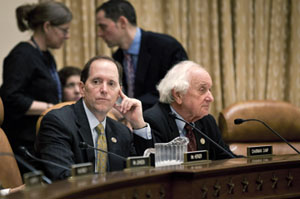 JACKIE JUDD:  Good day, this is Health on the Hill. I’m Jackie Judd. The Supreme Court’s decision to uphold the health overhaul law is front and center today on Capitol Hill. The Republican-controlled House is debating whether to repeal the measure again, and there have been news conferences and committee hearings on the impact of the court’s decision.

The focus there, of course, was on taxes. What were the highlights?

MARY AGNES CAREY:  They talked a lot about the Supreme Court’s decision that Congress could, through its taxing powers, levy a penalty on individuals who didn’t purchase health insurance by 2014 —

Republicans were saying that this deserves to be looked at closely. And if Congress were going to be allowed to do that, where would it end? Could future Congresses use their taxing authority for the good of the country?

Dave Camp, who is the chairman of the committee, talked about: Is this a first step into a brave new world of uncontrolled congressional power on taxation?

Democrats, for their part, looked at the idea that not a lot of folks will have to pay this penalty. They talked about Congressional Budget Office estimates that about 1 percent of Americans would be faced with this penalty. They also spent a lot of time talking about things in the law that people like: No more lifetime limits on coverage; adult children up to 26 being allowed to stay on a parent’s health insurance plan; the fact that millions more Americans will get coverage. They basically have said, as President Obama has said: The Supreme Court has spoken on this. Now we need to move on.

JACKIE JUDD:  As I said at the top, the court’s decision was front-and-center on the Hill today. Republicans may not win the war – that is, repeal this law – but they could win some battles along the way. I think a day like today really points out that it is important who controls the House.

JACKIE JUDD: And it appeals to the base.  It also forces Democrats to address the issues – some issues – they perhaps would rather not?

MARY AGNES CAREY: For example, the idea that someone could be taxed if they didn’t comply with the mandate. And the idea today was raised in the Ways and Means Committee, this idea, now for example, there’s no jail time if you don’t pay that penalty, but couldn’t a future Congress come back and lift that restriction? Couldn’t a future Congress come back and raise those penalties? And of course they could. Those are the sorts of things Democrats really wouldn’t want to talk about, but Republicans are forcing it.

JACKIE JUDD: Tomorrow, Wednesday, the House is taking yet another vote on whether to repeal the law. The outcome is not a surprise. But again, it will go to the Senate and it will die, right?

JACKIE JUDD: And so the purpose is what we just discussed?

MARY AGNES CAREY: It’s the messaging machine. How you can say as Republicans campaigning for office – remember in the next election, we have got control of the White House and Congress at stake – you can say to the American public: We want to rip this out by the roots. And in order to do it, we need to have control – you the voter need to give us control. So this continues that messaging.

JACKIE JUDD: And I think we will continue to talk about through this campaign season.

MARY AGNES CAREY: I think we will.