Mary Agnes Carey talks with Jackie Judd about HHS Secretary Kathleen Sebelius’ appearance before the House Ways and Means Committee. She defended the health care law and the president’s fiscal 2013 budget request. The hearing had all the hallmarks of a partisan political event. 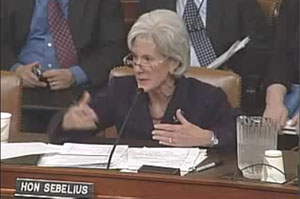 >> Listen to the interview.

JACKIE JUDD:  Good day, this is Health on the Hill.  I’m Jackie Judd.  The House Ways and Means Committee held what turned into a contentious hearing with Health and Human Services Secretary Kathleen Sebelius.  Covering the story is Mary Agnes Carey of Kaiser Health News.  Mary Agnes, what’s the headline?

MARY AGNES CAREY:  We heard a lot of familiar complaints from Republicans about the health care law.  That it is too big; it is too expensive.  That employers will simply dump coverage for their current workers and put them in the health exchanges once they’re up and running.  And that people won’t be allowed to keep the health care coverage that they like.

JACKIE JUDD:  And the Democrats said?

MARY AGNES CAREY:  Secretary Sebelius and Democrats praised the health care law, pointing to provisions that are currently up and running.  Things like seniors getting help with their Medicare prescription drug costs when they fall into this coverage gap known as the “doughnut hole.”  Millions of Americans are now getting better access to preventive services without co-pays or deductibles.  And 50,000 people are getting coverage through high-risk pools that were created by the health law.

JACKIE JUDD:  As you say, Mary Agnes, a lot of familiar territory talked about today.  Did it have more the feeling of a campaign debate rather than a congressional hearing?

MARY AGNES CAREY:  It did and I think it underscores how much we’re going to be hearing about the health care law in the campaigns.  Democrats, of course, are going to praise many of the provisions feeling this is favorable with voters.  Republicans feel just as strongly in their complaints and concerns about the health care law that the public will be on their side.

JACKIE JUDD:  A perennial issue came up, the so-called “doc fix.”  What were the Republicans questioning Sebelius about on that point?

MARY AGNES CAREY:  They were talking about the president’s current budget request saying that he doesn’t fund a long-term fix, a long-term answer to the Medicare physician payment problem.  Secretary Sebelius’ response was that the president, just as many Democrats and Republicans on Capitol Hill, don’t want this continual short-term fixes, if you will, to go on for Medicare physicians.  They want a long-term solution.  But financing it has always been the difficulty.

The secretary said this is not an HHS fix; this is a budget fix.  We’re talking about over $300 billion over the next decade to erase this problem, and it’s got to come from more than just the HHS budget.

JACKIE JUDD:  Mary Agnes, a final question:  The Independent Payment Advisory Board, which was created as part of the health care overhaul law, was brought up at the hearing today.  Did Secretary Sebelius say something new about her expectations of this board, which was created to help control Medicare spending?

MARY AGNES CAREY:  The point at which the IPAB recommendations have to either be stopped by Congress or the HHS secretary has to implement them has been pushed back, Secretary Sebelius said, to about 2018. That’s because Medicare spending is not rising as quickly as anticipated when the health care law was passed.

So while IPAB is still projected to be up and running by 2014, which was in the health care law, the point at which the trigger kicks in is now predicted to be later.

JACKIE JUDD:  Any sense about whether the administration may feel that by pushing it out until 2018 it may tamp down some of the criticism of what this board is called on to do?

MARY AGNES CAREY:  I don’t think it can stop the criticism, because that has been there.  It has been present.  There’s yet another piece of legislation in the House moving forward to repeal the IPAB.  That will go to the Senate where it has some proponents.  It’s expected to be stopped there.  But the controversy around this panel is simply there, and it’s strong, and it’s present.

JACKIE JUDD:  Thank you so much, Mary Agnes Carey on Capitol Hill.