Minority and low-income groups continue to be less likely to have a regular source of health care when compared to the general population, despite efforts over the past decade to remedy the situation. This and other health disparities persist across race, ethnicity, income level and education, according to the final review of Healthy People 2010, which was released Thursday. 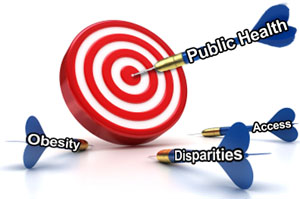 Healthy People 2010, the third such effort by federal officials, is a decade-long initiative which established an ambitious set of goals in November 2000 to improve the health of all Americans, and the report details how the country did.

Progress has been made on a number of counts: Life expectancy at birth went up a year from 76.8 years in 2000 to 77.8 years in 2007. Rates of death from coronary heart disease, stroke and other illness decreased over the course of the decade. Nonetheless, health disparities remain a major problem.

“It’s a source of ongoing frustration,” said Howard Koh, assistant secretary at the Department of Health and Human Services, which manages the Healthy People initiative. Much of the movement on disparity-related objectives “is certainly not in the right direction,” or just stagnant, Koh added.

HHS officials expect to renew the emphasis on reducing health disparities as they shift attention toward the next installment of goals — Healthy People 2020. And with the combination of the 2010 health law and a recently announced HHS strategy for minority health, officials said they were optimistic.

The report measures the success of Healthy People 2010 based on 733 health indicators, each one with a “very ambitious,” quantifiable target for improvement, Koh said. Baseline data was collected in the 1990s and early 2000s, and compared to the most recent data, 23 percent of targets were met; another 48 percent of health indicators showed improvement, which Koh viewed “very positively.”

A disappointing 24 percent of indicators, however, moved further from their goal.

Among health indicators related to reducing disparities by race, ethnicity, sex, income and education, more than 69 percent showed no change at all.

Many of the health measures analyzed by HHS are related to Americans’ access to high quality care, and progress on this front was largely mixed. For example, the number of people younger than age 65 with health insurance remained steady over the past decade, with 83 percent insured in 2008, the latest official figure used in this review.

Certain aspects of coverage, however, showed declines. The total number of adults age 18 and older with a source of ongoing care was down to 84 percent in 2008; in 1998, the baseline used by Healthy People, it was 85 percent. Blacks and Hispanics saw 2 and 3 percentage point drops during that same time period, down to 81 and 69 percent coverage, respectively. Adults with earnings below the federal poverty level ($10,890 for an individual) and the nearly poor—those with incomes up to twice that level — each dropped 4 points to the lowest coverage rates of all populations. They were 71 and 76 percent, respectively.

Rates for children, on the other hand, showed improvement between 1998 and 2008, especially among minority populations. The rate for ongoing care among black children went up 3 points and became even with that of the general population at 94 percent. Coverage of Hispanic children rose 3 percentage points but remained at 90 percent in 2008. Among Asian children, there was a 6 point increase to 95 percent coverage, and poor children saw a 4 point increase to 92 percent.

Meanwhile, the number of people who had a usual primary care provider dropped 1 percentage point between 1996 and 2007 to 76 percent overall; it also dropped one point to 73 percent among blacks. Hispanics saw a 1 point increase, although the group’s access was still the lowest of all groups, reaching just 65 percent.

HHS officials expect access to care to dramatically improve in coming years with the implementation of the 2010 health law, which has already yielded a significant increase in coverage for young adults under age 26 who can now stay on their parents’ plans.

“We know that very recently there is progress in insurance coverage, and a lot of the [health] improvements we’ll see in the coming years will be linked to health reform,” said Ed Sondik, director of the National Center for Health Statistics at the Centers for Disease Control and Prevention. “Without insurance, we’re missing an important part of access to care and preventive regimens.”

Prevention was among the bright spots of the Healthy People 2010 findings, according to Carter Blakey, acting director of the Office on Disease Prevention and Health Promotion. The number of adults 50 and older who had a sigmoidoscopy to screen for colon cancer jumped from 37 percent in 1998 to 55 percent in 2008, exceeding the 50 percent target. Full immunization among children between 19 and 35 months rose from 73 percent in 1998 to 78 percent in 2008, nearing the 80 percent target.

Other health improvements include:

Among major problem areas, Blakey noted, is nutrition. Between 1994 and 2006, the rate of obesity jumped from 23 to 33 percent among adults age 20 and older, and from 11 to 18 percent among adolescents 12 to 19 years old. Those rates were likely not helped by a disappointing change in care: The number of physician office visits that included diet and nutrition counseling for medical conditions dropped from 42 to 35 percent between 1997 and 2005.

The final HHS report sets the stage for further work this decade, with the modified goals of Healthy People 2020. Koh described how, since it came about in its first form 30 years ago, Healthy People has been “a roadmap, a framework, a national plan” for improving health – and now it’s complemented by health reform and other promising initiatives.

“There are many challenges ahead, and disparities continue to exist,” Koh said, adding that, in looking toward 2020, “we’re expecting to see progress.”