Doctors serving Medicare patients. Scientists looking for a better way to treat diabetes. HIV patients who can’t afford to buy their medications. These are but some of the many people who will be affected by the automatic federal spending cuts that officially took effect Friday.

Both Democrats and Republicans say they didn’t like the budget reductions, called the sequester, but they couldn’t agree on how to stop them. The $85.3 billion in cuts for fiscal 2013, which ends Oct. 1, are part of a larger package of $1.2 trillion in trims scheduled to occur over the next decade. The reductions are split evenly between defense and domestic programs.

The sequester would not affect Medicaid, the joint federal-state health program for the poor. However, Medicare spending would be cut by 2 percent through reductions in payments to hospitals, physicians and other care providers, including Medicare Advantage plans and the companies running the Medicare Part D plans. By law, the Medicare cuts don’t begin until April 1.

But other health care efforts would be among the government programs that face reductions of about 9 percent, according to the Office of Management and Budget. The full impact likely won’t be felt for weeks as the cuts roll out, and some lawmakers have suggested that sequestration cuts could be dealt with as part of negotiations to fund the government after the current continuing resolution expires March 27.

Dr. Gary Wiltz, the chairman-elect of the board of the National Association of Community Health Centers, one of the groups facing those cuts, said the reduced federal funding will cause the centers to dramatically curtail services and estimates that as many as 900,000 patients could be turned away from care. “Many of them cannot afford to go anyplace else,” he said in a statement. 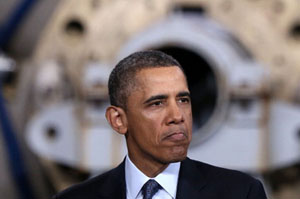 President Barack Obama Tuesday called on Congress to work out a different scenario for dealing with the nation’s fiscal problems and avert the “painful, arbitrary budget cuts.” Addressing workers at a shipbuilding facility in Newport News, Va., he said, “Instead of cutting out the government spending we don’t need — wasteful programs that don’t work, special interest tax loopholes and tax breaks — what the sequester does is it uses a meat cleaver approach to gut critical investments in things like education and national security and lifesaving medical research.” He is urging a combination of spending cuts and additional federal revenues through changes in the tax code.

But Republicans are opposed to any increase in taxes to fund the spending. Senate Minority Leader Mitch McConnell, R-Ky., criticized the president Thursday for failing to offer “a serious plan.”

“Instead of directing his cabinet secretaries to trim waste in their departments, he’s going to go after first responders. And teachers,” McConnell said. “And almost any other sympathetic constituency you can think of. … He’ll say he has no choice but to release criminals into the streets and withhold vaccines from poor children. And somehow, it will be everyone’s fault but his. Nonsense.”

The president and congressional leaders are meeting at the White House today on the issue.

A White House summary of the sequestration’s effects includes these health-related programs:

–The National Institutes of Health would be forced to “delay or halt vital scientific projects and make hundreds of fewer research awards,” which means that “several thousand personnel could lose their jobs,” the White House said. Twelve thousand scientists and students would be impacted because the National Science Foundation would offer 1,000 fewer research grants and awards.

–The Food and Drug Administration would be able to do fewer drug approvals and conduct 2,100 fewer inspections at domestic and foreign facilities that manufacture food products.

–Cuts to the Mental Health Block Grant program would mean that 373,000 adults and children would not receive mental health services. “This cut would likely lead to increased hospitalizations, involvement in the criminal justice system and homelessness for these individuals,” according to the White House document.

–Cuts to the AIDS drug assistance program could result in 7,400 fewer patients having access to HIV medications, and the Centers for Disease Control and Prevention could conduct approximately 424,000 fewer HIV tests.

–The Indian Health Service and tribal hospitals and clinics would also be hit by sequestration, with 3,000 fewer inpatient admissions and 804,000 fewer outpatient visits, according to the White House analysis.

The sequester threat, however, has led to an intensive lobbying campaign by industry and patient advocacy groups. While the cuts to Medicare are limited, hospitals and other medical providers who will be absorbing them argue that the latest reductions are especially difficult because they already sacrificed some of their federal funding in the 2010 health care law.

In a January report, the American Hospital Association noted that hospitals have contributed an average of 28,000 new jobs per month in 2012 and that hospitals employ almost 5.5 million people and support an additional 10 million jobs. “Congress should not overlook the economic contribution of hospitals as it considers further deficit reduction proposals,” association president and chief executive officer Rich Umbdenstock said in a statement.

More than 270 organizations, including Research!America, the Mayo Clinic and Yale School of Medicine, wrote to Capitol Hill earlier this month seeking changes. Among their concerns, they warned that sequestration “will negatively impact U.S. competitiveness just as other nations are aggressively boosting their investments in research and development.”

In addition, more than 300 Alzheimer’s researchers said in a separate letter to the Hill that the cuts would be devastating. “A robust commitment to high-impact Alzheimer’s research is essential if we hope to stop this disease before it destroys the nation’s health and financial well-being,” they wrote to congressional leaders.

The American Medical Association and other medical organizations are also fighting sequestration, urging Congress to take a “more targeted, rational approach that allows careful assessment of how to fulfill its long-term commitment to seniors, uniformed service members and their families, and public health and safety priorities.”

Even if Congress finds a way to stop the cuts, that’s no guarantee that Congress won’t trim agency budgets even more in the yearly appropriations process or as lawmakers seek a larger deal to reduce the deficit.

“The sequester is a better deal if … that’s the only thing that happens,” said Joseph Antos, a health care expert at the American Enterprise Institute, a conservative think tank. “I think a pretty good bet is that we’re going to get a sequester … but on top of that we’re going to see additional cuts in Medicare.” Medicaid, he and other analysts speculate, is likely to remain off the table.