The failure of the congressional super committee could mean automatic budget cuts totaling billions of dollars for everything from Medicare to biomedical research, starting in 2013. But some health care interests stand to fare better than others. 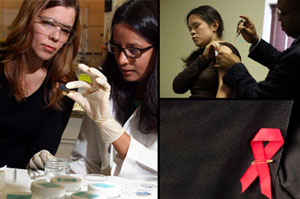 Two major health entitlement programs, Medicare and Medicaid, have protections under the law that set up the super committee. Automatic cuts would not affect Medicaid, the joint federal-state health program for the poor, and Medicare spending would be cut by 2 percent – all from payments to hospitals and other care providers.

But unless Congress steps in to rework the legislation mandating the automatic cuts, a series of across-the-board reductions would kick in 2013. The House and Senate appropriations committees will have to decide how to spread the cuts among various programs. And some of the larger, better-financed lobbies may have the upper hand.

“If past is prologue, [the National Institutes of Health] is more than first among its equals,” said Chris Jennings, president of the consulting firm Jennings Policy Strategies and a former health care adviser to President Bill Clinton. “It has strong supporters on Capitol Hill and lobbyists who are influential, including patient groups, universities and former members of Congress.”

It is not yet clear how the process would work, but health care spending is considered in the same annual appropriations legislation as labor and education spending. There are questions about how much authority the committees will have to limit cuts in some areas while increasing the hit to others.

Congress laid out this scenario for cost cutting – dubbed “sequestration” in legislative lingo – when it created the super committee in August as part of a deal to raise the debt ceiling and avoid the first U.S. default in history. Half of the cuts are supposed to come from defense, and the other half from domestic spending.

While the cuts to Medicare are limited to hospitals and other medical providers and would not exceed 2 percent, they argue that is too much and that they sacrificed plenty in the 2010 health care law.

Rich Umbdenstock, president and CEO of the American Hospital Association, said across-the-board cuts would hurt Medicare beneficiaries and their families and “also have an impact on the ability of hospitals to provide essential public services to the communities they serve given the impact that Medicare has on the entire health care system.”

But the hit to other health programs – those that depend on “discretionary” annual appropriations — would be more severe.  At stake is federal money that, among other things, helps HIV patients pay for lifesaving medication, funds biomedical research and helps prevent and respond to food-borne illnesses and disease outbreaks.

If the full $1.2 trillion in automatic cuts go into effect, funding for non-defense discretionary programs in 2013 would face reductions of 7.8 percent, dropping each year to 5.5 percent in 2021, according to Congressional Budget Office estimates. Richard Kogan, a senior fellow at the Center on Budget and Policy Priorities, places the first year’s hit at over 9 percent, however.

Research groups Monday urged Congress to reverse the planned cuts for 2013. “The mindless, irresponsible across-the-board cuts of the sequester would drain the lifeblood from our efforts to improve the health of our nation and could cause the loss of our 65-year leadership in science, technology and innovation,” Research!America chair, former Rep. John Porter, R-Ill., said in a statement.

The American Medical Association, which had urged panel members to enact a permanent change to the way Medicare pays physicians, said Congress must act before the end of the year to stop a scheduled 27 percent payment cut in January.

“The AMA is deeply concerned that continued instability in the Medicare program, including the looming 27 percent cut scheduled for January 1, will force many physicians to limit the number of Medicare and TRICARE patients they can care for in their practices,” AMA president Peter W. Carmel said in a statement. “Congress has ignored the reality that short-term patches have grown the problem immensely. The cost of repealing the formula has grown 525 percent in the past five years and will double again in the next five years.”

Health advocates fear deep cuts will harm the public by reducing services and investment in several areas, including:

The agency plays an important role in detecting and responding to emergencies such as tornadoes, hurricanes, food-borne illnesses and infectious disease outbreaks. It also helps fund state and local public health departments and labs, which Benjamin said is extremely important as states struggle with massive budget deficits. Since 2007, he said, 44,000 jobs in local and state health departments have disappeared. “What ultimately happens is you do less things. You inspect restaurants less. You inspect wells less,” Benjamin said in an interview last month.

The CDC also subsidizes the cost of vaccines for uninsured and underinsured children. The prices of standard childhood vaccines are rising, Benjamin said.

Collins said at the hearing that the BGI genome center in Shenzhen, China, “is capable of sequencing more than 10,000 human genomes a year. The capacity of that one Chinese institution now surpasses the combined capacity of all genome sequencing centers in the United States.”

Ryan White help is a last resort for many people who are low-income, uninsured or underinsured. On average, a year’s worth of medication costs about $15,000 to $20,000, and total care for an infected person can run about $100,000, according to Johnson.

He also fears cuts to federal funding that help states provide free or subsidized HIV testing. The Centers for Disease Control and Prevention sent $800 million to states in fiscal year 2011.

The prevention fund has provided money for programs aimed at reducing obesity and tobacco use, among other public health priorities.

Many Republicans and some Democrats are already talking about new legislation to block or alter the automatic 2013 cuts to defense programs. But even if Congress acts, Jennings doubts that health care would benefit. If anything, he said, health programs could wind up facing deeper cuts.