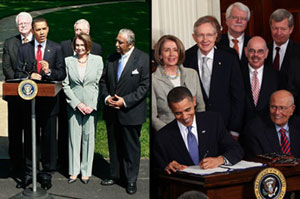 In May 2009, Congressional leaders visited the White House with ambitious plans for health overhaul legislation. The bill signed by the president reflected months of turbulent shifts in the political landscape.

In the year it took Congress to write and pass a health care overhaul, turbulent political shifts – including the Democrats’ loss of Sen. Edward Kennedy’s seat and the rise of the Tea Party movement – forced critical compromises on the scope of legislation.

The downsized ambitions of the final package mean that 32 million more people – not the 37 million in the original proposals – will end up insured by 2019. Others will face greater financial strain than lawmakers originally envisioned.

The political developments are well-known: A so-called gang of six Democratic and Republican senators, led by Finance Chairman Max Baucus, D-Mont., failed to forge a bipartisan agreement. Concerns about the federal deficit swelled. Grass-roots conservatives filled congressional town hall meetings last August and helped to propel Republican Scott Brown to victory in Massachusetts. That deprived Democrats of a filibuster-proof Senate majority and transformed them from confident victors of the 2008 elections to nervous incumbents.

Less widely understood are the adjustments the health overhaul legislation underwent from July 2009, when House Democratic leaders first introduced their ambitious proposal, to this week, as the House passed the Senate bill and a related package of changes requiring Senate action. Those modifications will have major effects on Americans in years to come:

· Low-income workers receiving subsidies will end up paying more in premiums than they would have under the original House proposal; they also may have to pay more out of pocket on deductibles and co-insurance. (To be sure, the final version offers people significant financial protections that they do not have now.)

· The final package will experiment with dozens of ways to brake the growth of medical costs, but it lacks the most aggressive cost-control measures proposed during a year of negotiations.

“Some of the key changes are in the area of affordability,” says Edwin Park, a senior fellow at the Center on Budget and Policy Priorities, a Washington think tank. The financial assistance for people changed because President Barack Obama and lawmakers, under political pressure, decided that the overall package needed to total less than $1 trillion over a decade.

Only the people near the maximum income for qualifying for subsidies-four times the poverty level, or $88,200 for a family of four-will have to pay less than they would have under the initial House bill.

Under the final package, people earning twice the poverty level will have to pay 6.3 percent of their income toward premiums – 1.3 percentage points more than they would have had to pay under the original House bill. That means a family of four earning $44,100 will have to pay $2,778 a year in premiums, $573 more than they would have under the initial House bill.

“There was a political calculation that they could raise this much revenue and have it be palatable politically, but that raising more would be too difficult,” says Linda Blumberg, a senior fellow at the Urban Institute, a Washington think tank. “As a consequence they had to adjust the financial assistance provided to be consistent with that level of revenue.”

While the original House bill limited out-of-pocket costs to $5,000 for individuals and $10,000 for families, the final version uses the Senate thresholds of $5,950 for individuals and $11,900 for most families. Some families receiving subsidies could end up spending as much as 22 percent of their incomes on health care premiums and costs. These financial protections-as well as the premium subsidies-will become weaker in future years if medical costs continue to outpace inflation.

Older people who are too young for Medicare-those in their 50s and early 60s- will face higher costs than under the House’s initial bill, which proposed prohibiting insurers from charging this group more than twice what younger people pay. The final package allows them to charge three times as much. Still, that’s much better than the higher premiums some older people face now. One proposal to help them- Sen. Baucus’ plan to allow people at least 55 years old to buy into the Medicare program-never made it into the final package.

Overall, 23 million people will still lack health coverage in 2019, according to the Congressional Budget Office. Many are illegal immigrants who never would have been covered under any version of the legislation. Others will choose to pay a fine rather than buy insurance. The rest will be excused from the mandate to obtain coverage because it would cost them more than 8 percent of their incomes.

At the same time that lawmakers scaled back the financial protections for Americans, they also jettisoned several major provisions to control the ever-rising costs of health insurance. Back in May, when lawmakers were drafting the health care bill, economists of differing perspectives told the Senate Finance Committee they agreed on one idea: making employer-sponsored health care insurance taxable. Not only would that generate $226 billion a year, the economists argued, but it would give employers and consumers great incentive to choose cheaper insurance plans, pressuring providers to bring their costs down.

“It is the one thing, if we had been able to get some bipartisanship around it, that could have had a significant effect on cost,” says James Capretta, who was a top budget official in George W. Bush’s administration and is now at the Ethics and Public Policy Center in Washington.

But that proposal was highly unpopular with unions and many other people who have insurance through their employers. As a result, the Senate approved a much more limited version of the tax, applying it to only the most expensive policies, and the House reconciliation deal limited it even more. The final version of the “Cadillac tax” applies only to insurance policies costing more than $10,200 for individuals and $27,500 a year for families and will not start until 2018. The tax is projected to raise $20 billion in 2019 – less than a tenth of the original estimate.

The tax is designed to hit more and more plans in the future if premiums grow faster than inflation, as expected, but many experts doubt lawmakers will let that happen.

The Senate also rejected the House’s favored plan to bring down costs: the creation of a government-run insurer, known as “the public option.” That proposal was strongly opposed by insurers, doctors and hospitals. Advocates disagreed among themselves about whether it would actually hold down costs; nonetheless, its exclusion removes one lever policy makers would have had to try to restrict growing health costs.

The final package kept many pilot projects aimed at changing the way doctors and hospitals are paid to encourage them to provide better care more efficiently.

“The most optimistic thing that can be said is it’s taking some consensus steps that might have potential for the future,” says Paul Ginsburg, president of the Center for Studying Health System Change. “There are very few concrete steps to control costs.”