This story was produced in collaboration with the 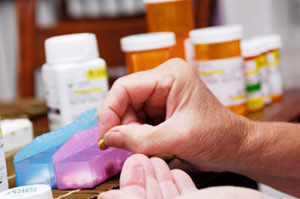 Now that the health overhaul has passed Congress, Democratic lawmakers are hoping to highlight its most immediate benefits. Chief among them: a plan to help millions of elderly and disabled Medicare beneficiaries pay for their medications by gradually eliminating a drug-coverage gap commonly known as the “doughnut hole.”

“Who among us will not be more secure knowing that our parents will be protected from the Medicare Part D ‘doughnut hole’ which has made life-saving medications so unaffordable for those that need them most?” Rep. Lucille Roybal-Allard, D-Calif., said after the House vote on the legislation.

What is the doughnut hole?

In 2003, Congress passed legislation creating the Medicare drug benefit, which went into effect in 2006. The benefit is offered by private insurers through free-standing drug plans and Medicare Advantage plans, which also offer medical benefits.

The Part D plans have some leeway in how they design their coverage. But under the typical benefit for 2010, beneficiaries have to pay a deductible of $310 and monthly premiums averaging $38.94. After meeting the deductible, beneficiaries are required to pay 25 percent of their drug costs; their drug plans, which are subsidized by the government, pick up the rest.

Once total spending by the patients and their drug plans exceeds $2,830, the beneficiaries hit the coverage gap, in which they must pay the full cost of their medications. After they spend another $3,610, they’re eligible for what’s called “catastrophic” drug coverage, under which they pay only 5 percent of their drug costs.

What will the new legislation do to close the gap?

Beginning this year, any Medicare beneficiary who crosses into the doughnut hole will receive a $250 check to help pay for their drugs.

Then, starting in January, patients in the coverage gap will get a 50 percent discount on brand-name drugs. The price reduction will be financed by the drug companies as part of a deal with the White House, under which the industry made tens of billions of dollars in price concessions.

At that point, the doughnut hole will effectively be closed.

Who will be affected?

The agency that runs Medicare reported this month that 29 million seniors and disabled people are enrolled in Medicare drug plans, or about two-thirds of the total Medicare population. Of those, roughly 3.4 million people entered the doughnut hole in 2007, the most recent year for which estimates are available. An additional number spent enough to enter the doughnut hole, but didn’t have to pay for their medications out of pocket because they have low incomes and receive separate subsidies.

“This is a very vulnerable population,” said Hilary Dalin of the National Council on Aging, noting that many in the doughnut hole suffer from multiple chronic conditions and take many medications. Once they enter the coverage gap, “they’re really thinking about cost versus care, which is a terrible proposition for anybody,” she said.

“With the cost of prescription drugs continuing to skyrocket, closing the ‘doughnut hole’ will help millions of older Americans afford their needed medications and avoid more intensive and costly care later in life,”  Barry Rand, the AARP’s top executive, said in a statement.

Why did Congress create the doughnut hole in the first place?

The doughnut hole is all about the money. The Republican-controlled Congress in 2003 ponied up $400 billion for the Part D benefit over 10 years  but that wasn’t enough to construct a benefit that didn’t have a gaping hole.

“There is no policy justification for the doughnut hole,” said Gail Wilensky, a former head of the Medicare agency and an adviser to numerous Republican lawmakers. “The politicians wanted to keep the deductible low enough to touch a lot of people.”

Indeed, even among opponents of the current legislation, filling the doughnut hole remains uncontroversial. “Nobody ever liked it,” said Robert Moffit, a policy analyst at the conservative Heritage Foundation. “It was literally a product of the congressional imagination created in order to meet budgetary requirements.”

How much will it cost to fill the doughnut hole?

An estimate by the Congressional Budget Office says closing the coverage gap will cost the federal government $42.6 billion by 2019.

But, the federal subsidies that will help close the doughnut hole will be phased in slowly. The full subsidies will not be in effect until 2020, after the period captured in the cost estimates. And the cost of filling the hole would increase in the following years.