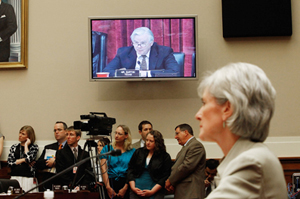 When the GOP takes over the House next year, Rep. Joe Barton, R-Texas, plans to challenge HHS Secretary Sebelius about the health law, as he did in a hearing in June, 2009. (Mark Wilson/Getty Images)

If Rep. Joe Barton becomes chairman of the House Energy and Commerce Committee next year, the Texas Republican vows to make life miserable for Democratic defenders of the health care overhaul law.

He will drag Health and Human Services Secretary Kathleen Sebelius and Medicare chief Donald Berwick to Capitol Hill for regular grilling. Democrats, he says, have essentially shielded the two key figures from answering tough questions about the new law.

And that’s just the beginning. Barton has a list of seven problems he intends to spotlight, including how he believes the Obama administration covered up cost estimates of the law before it was enacted, inappropriately silenced insurers from warning customers about what they believed would be rate increases and wrongly spent money on brochures touting improvements to the Medicare Advantage program even though funding is being reduced.

While repealing the new law remains the first order of business for angry Republicans, most acknowledge it’s a long shot, considering President Barack Obama’s veto power. Still, they’ll possess some powerful tools to challenge the law if they win a majority in the House and take over leadership of the committees.

Key Republicans are threatening to withhold funding for overhaul initiatives and to relentlessly pursue hearings and oversight investigations to challenge administration officials’ regulations and communications with the public. Committee chairmen have subpoena power, although holding the gavel is usually enough to get officials into the witness chair.

“Oversight of the existing law will build a case for full repeal,” said Barton. “We have to aggressively work to repeal the entire bill. As part of the process, we’ll have very aggressive oversight.”

Sen. Mike Enzi of Wyoming, the top Republican on the Health, Education, Labor and Pensions Committee, used the Congressional Review Act of 1996  in September to force a vote to kill a key interim health law rule issued by HHS but not finalized. Republicans argued the rule would make it nearly impossible for businesses to get grandfathered status, without which they would be subject to new requirements that could increase their costs.

The effort failed, but Republicans could again use the Congressional Review Act to block the regulation, said a Republican congressional aide: “You could have hearings leading up to that regulation and have a lot of people come and testify about what people see as the downside, and have this vote, which could be a major vote.”

Barton will likely face a challenge for the top committee spot from Rep. Fred Upton, R-Mich., but Upton also is pledging intensive oversight of regulations.

In an Oct. 4 column in the conservative website The Daily Caller, Upton wrote: “Over 4,100 pages of regulations have been issued since the measure was signed into law, and a dozen new regulations were not even subject to any kind of public scrutiny before taking effect.”

“As we work to take this bill apart,” he added, “we cannot allow the administration to take a wide berth on interpreting bad legislation to make it worse.”

If he’s chairman, Barton said he’ll investigate why Sebelius “issued a gag order to insurers when they began to talk about the possibility of Obamacare forcing [insurance] rate increases.” High on his agenda is exploring why Medicare’s chief actuary, Richard Foster, “has concluded that the president’s health care law will not rein in rising costs and federal spending,” and why Foster “was unable to project costs of the president’s bill until after it was passed by the House.”

Barton also accuses Sebelius of using government money to pay for propaganda. Rep. Darrell Issa, R-Calif., the top Republican on the Oversight and Government Reform Committee and another possible chairman-in-waiting, joined with Rep. Dave Camp, R-Mich., in asking the Government Accountability Office to investigate television ads in which actor Andy Griffith touts the benefits of the new law for seniors. “More good things are coming, like free checkups, lower prescription costs, and better ways to protect us and Medicare from fraud,” he says with his best, down-home Mayberry smile. “I think you’re gonna like it.”

The GAO found the ads legal, but James Gelfand, director of health policy at the U.S. Chamber of Commerce, predicts continued objections to them. He has a “strong feeling there is going to be some investigations into Andy Griffith, and I don’t mean Mayberry.” Gelfand has created his own list of 31 “possible investigations,” including one of the new HHS Office of Consumer Information and Insurance Oversight, which will help implement provisions dealing with private health insurance.

“This is a large new agency within HHS that’s been granted vast oversight powers,” said Gelfand. “There are questions about where in the legislation they found the authority to create this at all. I’ve heard House Republicans rumbling about it.”

It’s more fodder for an interrogation of Sebelius. Rep. Michael Burgess of Texas, who is the top Republican on the House Energy Subcommittee on Oversight and Investigations and candidate for chairman when the GOP takes over the House, has been frustrated in his attempts to get answers from her. In September, Burgess sent a letter to committee chairman Henry Waxman, D-Calif., complaining that he has ignored requests to bring Sebelius to the committee to talk about implementation. “It has now been six months since the passage,” he complained.

Burgess said he’ll make up for lost time in January.

While acknowledging the damaging impact that oversight can have on an administration, Democratic pollster Stan Greenberg said that Democrats should welcome the challenge next year as an invitation to get loud about new benefits that polls show people like, such as allowing adult children to remain on their parents’ policies until age 26 and prohibiting insurers from canceling policies in most cases. “Democrats need to join the fight,” he said.

House Takeover Will Give GOP Ways To Attack Health Law