The open enrollment period for coverage through the health insurance marketplaces starts today, and readers have plenty of questions about what to buy. I addressed a few of them this week.

I know that silver plans are the most popular type of coverage on the marketplace, but bronze plans are often a lot cheaper. Are there circumstances when I should consider buying bronze?

Bronze plans may make sense for some people, including those who are healthy and don’t expect to use much health care as well as those who are sick and expect to use a lot of it. While the out-of-pocket spending limit for both bronze and silver plans is often similar, the premium for bronze plans is generally significantly lower.

Look carefully at the total amount you might be responsible for paying out of pocket with each type of plan, in addition to coverage specifics and provider networks.

If you typically use minimal health care services, you may be willing to risk the higher deductible of a bronze plan, which is likely to top $5,700, compared with about $3,000 for a silver plan. (Overall, bronze plans pay 60 percent of health care expenses on average, while silver plans pay 70 percent.)

But if you have an expensive condition and know you’re likely to blow through your deductible and hit your out-of-pocket spending limit for the year anyway, a bronze plan may make financial sense.

Meanwhile, the average monthly premium this year for a 50-year-old is $408 for bronze plans versus $496 for silver plans, a savings of $88 per month, or $1,056 annually, according to Avalere.

In this example, someone who reaches their out-of-pocket maximum during the year would save $581 on average if they were in a bronze plan instead of a silver one. 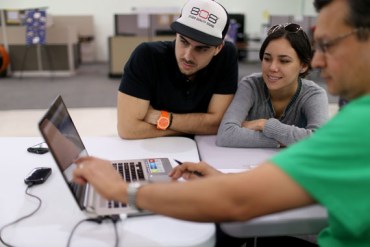 The government will compare your stated income with your tax returns. (Photo by Joe Raedle/Getty Images)

There’s one important exception: If your income is less than 250 percent of the federal poverty level (about $30,000), you can qualify for cost-sharing subsidies that reduce your deductible, copayments and out-of-pocket spending limit. But you must buy a silver plan in order to get the subsidies.

One potential downside of buying a cheaper plan with a higher deductible for people with high health care costs: you’ll have to shell out larger sums up front until you hit the out-of-pocket-spending cap, Pearson said. After that, the plan generally pays 100 percent of your costs for in-network care.

When I sign up for health insurance on the marketplace this year, is there any reason I shouldn’t underestimate my income to get a bigger tax credit? I thought the Internal Revenue Service couldn’t come after people for repayment.

When you apply for coverage on the marketplace you have to attest that you’re providing accurate information, otherwise you could face penalties. Apart from that, you’re confused about a couple of things.

Most people must have health insurance or pay a penalty. This year, the penalty is the greater of $695 per adult or 2.5 percent of income. If you don’t make that payment, the IRS can deduct it from your income tax refund, but it can’t use many other enforcement tools to collect the money.

However, premium tax credits are handled differently. As you note, people with incomes up to 400 percent of the federal poverty level (about $47,000 for one person) can qualify for those credits to help pay for their premiums. If you underestimate your income and receive too much in advance premium tax credits, you’ll generally have to repay the excess. If you don’t, the IRS can use liens and levies to collect what it’s owed, and it may charge interest and penalties to boot, said Mark Luscombe, principal federal tax analyst at Wolters Kluwer Tax and Accounting, a consulting and software provider for tax professionals.

But the exchange isn’t going to just take your word for it when you estimate your income. The marketplace will compare your estimated income to your tax filings and Social Security information, and ask you for documentation if your estimated income for next year differs substantially from what’s on file, said Timothy Jost, an emeritus professor at Washington and Lee University School of Law in Virginia who’s an expert on the health law.

If you do get too much in tax credits, your repayment is generally capped at between $300 and $2,500, if your income is less than 400 percent of the poverty level. People with higher incomes have to repay the full amount.

As of last December, 1.8 million taxpayers had filed 2014 returns with excess advance premium tax credits of $1.6 billon that was required to be repaid, according to a report from the Treasury Inspector General for Tax Administration. Most people repaid what they owed; only 39,000 of those taxpayers, 2 percent of the total, had unpaid assessments at year end, the report found.

What if I live in a county where the marketplace is losing all but one of its insurers? How can I be sure to get good coverage?

About a third of counties will have only one insurer selling plans on the marketplace next year, according to an analysis by Avalere Health and The Associated Press.

Sometimes, an insurer may offer dozens of plans in a particular area, said Karen Pollitz, a senior fellow at the Kaiser Family Foundation, while in other areas it may offer just a handful. (KHN is an editorially independent program of the foundation.)

You’ll have to do some digging to determine how they differ.

“Check out the summary of benefits and coverage (that each plan posts online) to see covered benefits and prior authorization requirements,” said Pollitz.

In addition, try to browse a plan’s provider network to get a sense of breadth of coverage and ensure it includes doctors and hospitals that you use. “Are there two pediatricians in the network or are there 200?” she said.

Consider working with a broker, Pollitz advised.  “They really do have some insight to insurance companies and their networks.”

Healthy Customers, And Those With Major Medical Needs, May Want Bronze Plans