The large red-and-white bins at Walmart pharmacies across the country read, in bold all-caps type: “Approximately every 40 seconds an American will have a heart attack.”

Inside the 3-foot-tall cartons, adorned with the American Heart Association and Bayer logos, were dozens of boxes of low-dose Bayer aspirin.

The implication was that everyone could reduce their heart attack risk by taking a “baby aspirin.” But recent studies have found that’s not the case.

In fact, the American Heart Association says that although aspirin can help people with previous heart attacks or strokes, its risks generally outweigh the benefits for others.

After Kaiser Health News inquired about the marketing bins, the heart association in late February said it is having Bayer, one of its major donors, pull them from Walmart — although the campaign was due to wrap up by the end of the month, anyway. But 10 days later, a reporter shopping at a Walmart in Florida found a bin still on display. 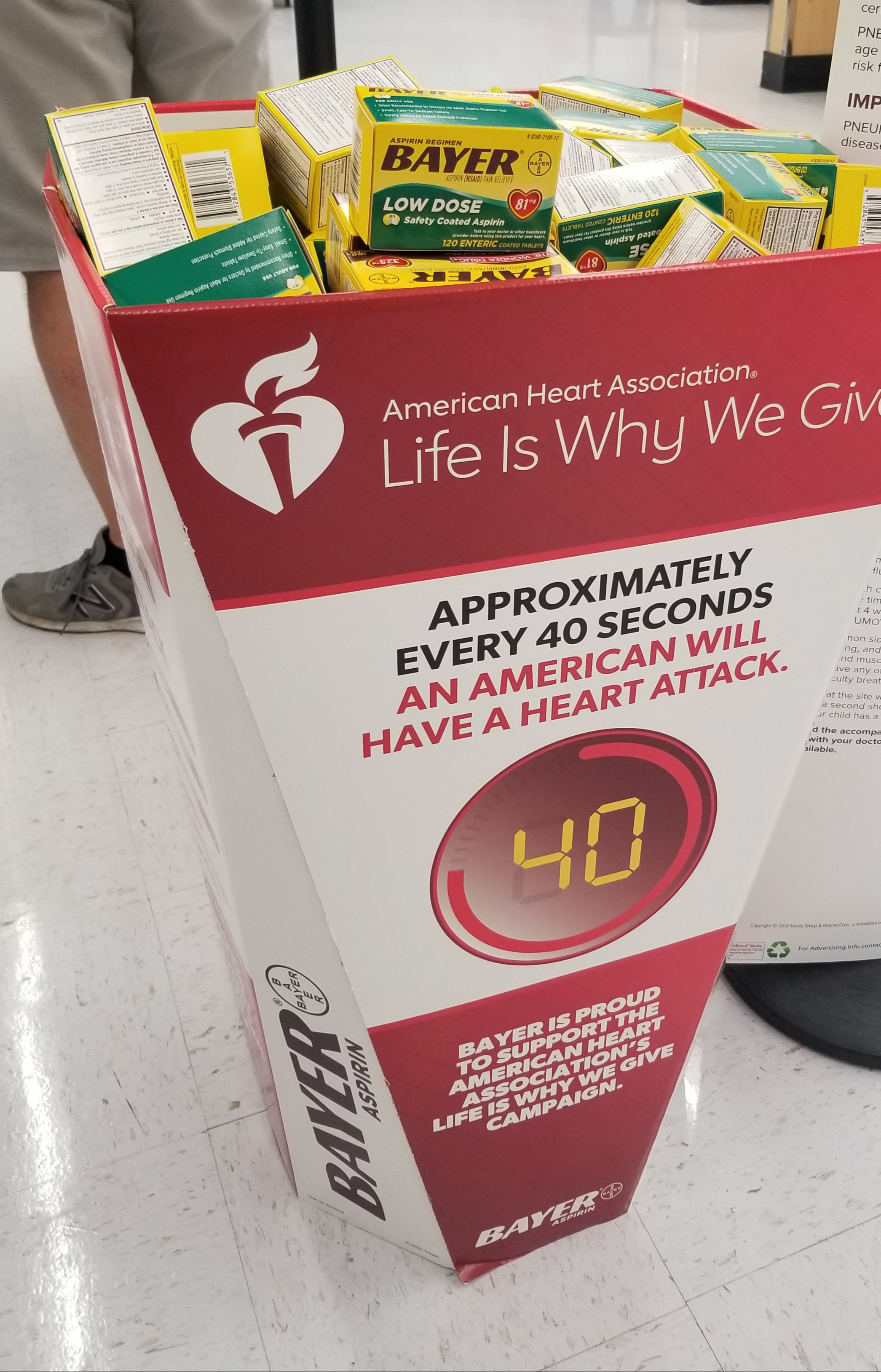 The American Heart Association told Bayer to take down displays like this one at a Walmart in Jupiter, Florida, because it could falsely suggest that baby aspirin could reduce heart attack risk.(Phil Galewitz/KHN)

About a quarter of Walmart stores nationwide displayed the bins, the association said.

“This was a misstep,” said Suzanne Grant, a spokesperson for the American Heart Association. “It was a human error on our end.”

Aspirin helps keep the blood from clotting, so there is less chance that blockages will form in key heart arteries. For years, it was generally recommended as an option for healthy individuals to prevent heart attacks. But it also can lead to stomach bleeding, a serious side effect, and a number of studies have raised questions about the safety of aspirin use for people without cardiovascular disease.

Last year, after three new studies were published on the issue, the American Heart Association joined other medical groups advising against aspirin therapy unless a doctor recommends it.

The U.S. Preventive Services Task Force, an expert panel that makes recommendations on medical care, is reexamining its guidelines, which advise low-dose aspirin for people ages 50-59 who have a risk of cardiovascular disease and no history of bleeding problems. It also has noted that individuals ages 60-69 at risk of heart disease may want to consider the therapy, but it should be used selectively. Evidence for other age groups is inconclusive, the task force says.

Grant said the association approved the marketing bins without including “precise language” explaining that people need to talk to a doctor before taking aspirin regularly. That language is printed in smaller type on the Bayer baby aspirin packaging.

The bins promoted the heart association’s “Life Is Why We Give,” a fundraising effort. Bayer is a financial supporter of the campaign.

Dr. Eduardo Sanchez, the chief medical officer for prevention at the American Heart Association, said the bins could have given people the wrong impression and led to more liberal use of baby aspirin.

“Our position is that aspirin should be used sparingly, if at all, in people who have not had a heart attack or stroke,” Sanchez said.

The heart association reviews all products and marketing that contain its logo, Sanchez said. It is unclear why or how the association allowed this display to occur.

“Any inference that Bayer’s demonstration of support for the AHA’s heart health initiatives could be construed as medical advice is simply preposterous,” said Bayer spokesman Chris Loder. “The display contains no medical claims whatsoever and is merely intended to help the AHA raise awareness of a major public health issue.”

The case highlights the ongoing challenge of communicating who should take aspirin to prevent heart attacks since the national guidelines changed a year ago.

But it also illustrates potential problems when large pharmaceutical companies team up with nonprofit health groups. Arthur Caplan, a bioethicist at New York University, said those types of connections can invite ethical questions about marketing.

Bayer gave nearly $1 million to the American Heart Association in the most recent fiscal year, according to the association’s latest financial records. In all, the association received about $33 million from drug companies, medical device makers, insurers and health firms. It does not endorse any particular product.

But Caplan said the marketing displays at Walmart imply that AHA endorses the Bayer aspirin brand.

That’s troublesome because, as the heart association has said, aspirin is recommended only for certain people to reduce the risk of heart attack, and the displays do not disclose that less costly, generic versions of aspirin are also available.

Doctors say they worry many patients still routinely take aspirin for protection without advice from a doctor.

“People see these displays and advertising on television and they think aspirin is like taking candy,” said Dr. Jacob Shani, chair of cardiology at Maimonides Heart and Vascular Institute in New York. “The display makes it look like candy and you take this candy and you do not have a heart attack.”

Still, Dr. Erin Michos, associate director of preventive cardiology at Johns Hopkins University School of Medicine in Baltimore and one of the physicians who helped develop the heart association’s new position on aspirin last year, said she has seen patients who should be taking aspirin who have stopped because they heard about the new guidelines. “There is a lot of misunderstanding,” she said.

“Everyone needs to discuss with their doctor about whether aspirin is recommended for them,” she said.