The Washington, D.C., jail has big metal doors that slam shut. It looks and feels like a jail. But down a hall in the medical wing, past an inmate muttering about suicide, there’s a room that looks like a normal doctor’s office.

“OK, deep breaths in and out for me,” says Dr. Reggie Egins to his patient, Sean Horn, an inmate in his 40s. They talk about how his weight has changed in his six weeks in jail, how his medications are working out and if he’s noticed anything different about his vision. Egins schedules an ophthalmology appointment for Horn.

Horn says before he arrived here, things were not looking good.

“I looked real bad. I was homeless, for one, and not taking my medicine,” says Horn, who has depression, high blood pressure and gout, among other things.

When he was out on the streets, Horn says, it was hard for him to get his medications or to see a doctor. So he just didn’t. He got sicker and sicker.

“I had two heart attacks and my gout flared up a whole lot of times when I was out there,” he says.

Horn is no outlier. People with a history of incarceration are typically much sicker than the general population, especially returning inmates like Horn. Studies done primarily in Ohio and Texas have found that more than 8 in 10 returning prisoners have a chronic medical condition, from addiction to asthma. Egins says a lot of it has gone untreated, for a range of reasons — because the health care system is tough to navigate, because they’re homeless and don’t have insurance, or because they don’t trust doctors.

“The first thing is that they usually have no permanent address, which means that they cannot apply for health insurance and/or there’s nowhere to receive those documents if they do,” says Egins, a family doctor who does correctional health care, splitting each week between serving patients at the D.C. jail and at Unity Health Care, a network of community health centers.

Now, being in jail is not healthy. But for a lot of people, the best health care they’ll receive is what they get behind bars. About 40 percent of inmates are newly diagnosed with a chronic medical condition while incarcerated. Outside, many only interact with doctors when they’re in the emergency room.

And when they are released, as millions are each year, they enter a risky time, says Dr. Emily Wang, a primary care doctor with the Yale University School of Medicine.

“Man, if there is any one single thing in the literature that is compelling, it’s that there’s a significantly higher risk of dying in the first two weeks following release from a correctional facility,” she says. 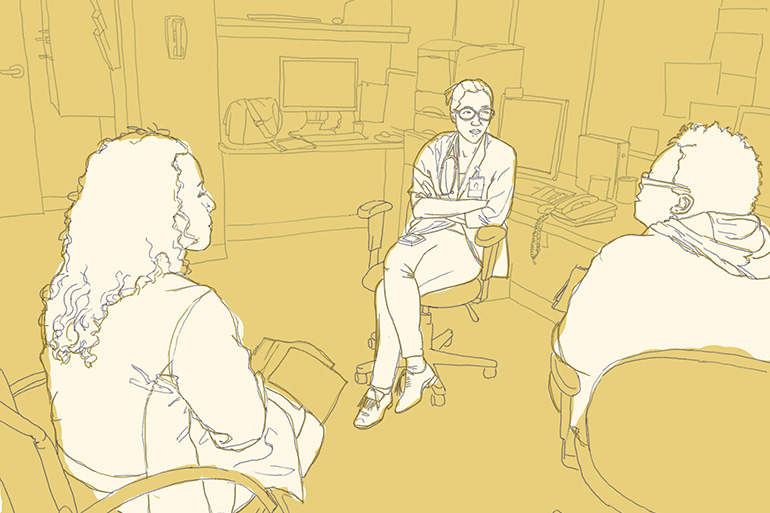 Drs. Lisa Puglisi and Emily Wang talk with a community health worker about the patients they’re about to see at a clinic for ex-offenders in New Haven, Conn. (Rae Ellen Bichell/NPR)

Wang says the primary causes of death after incarceration include overdose, heart disease, suicide and cancer — often treatable things, if you catch them early enough.

It’s not just a matter of getting insurance. “Insurance is necessary, but it’s not sufficient,” says Wang. “Our patients will often come with insurance, but they don’t know the first thing about how to use the health care system to their benefit.”

Behind bars, patients get three meals a day and line up to get their daily medications handed to them by a nurse.

“When they come home from prison, they have to learn to use the pharmacy, learn to get a refill, learn to make their appointments … on top of trying to get housing, get employed, figure out where to get food for the day,” she says.

So many former inmates put off getting medical care until they wind up in the emergency room, with conditions that have become a lot worse than they could’ve been. That means they are also more expensive to treat, costs that are often picked up by hospitals and taxpayers.

Wang and her colleagues are trying to make it easier for ex-inmates to manage their health care so they don’t end up in the ER. They work at the Transitions Clinic Network, which now has 14 sites across the U.S. and in Puerto Rico. They’re funded by private donations and by grants like one from the Centers of Medicare & Medicaid Innovation.

Their patients qualify for Medicaid based on income, and the clinics are reimbursed by Medicaid. The difference is that they offer more services than Medicaid typically does — like helping patients find a halfway house they can afford.

Joe McFadden has experienced how much of a difference those extra services can make. McFadden spent 40 days in solitary confinement before being released two weeks later.

“You’re just locked up like an animal. That’s not good or healthy at all,” says McFadden, who is in his 40s and was homeless and living on the streets of New Haven, Conn., when I spoke with him. “It’s not easy, coming home from being incarcerated to a world where you’re being discriminated against,” he says.

Shortly after release, McFadden ended up in the emergency room with a ballooning leg. It was a blood clot. “I thought I had pulled a muscle. It took me like a week to go in because I didn’t know the symptoms of having blood clots,” he says. He’d rarely been to the doctor before that, but now he comes in for regular visits at the Transitions clinic in New Haven. The staff there helped him find a substance abuse program, and a place where he could visit his two kids.

“Our rationale for this program is by organizing primary care in this manner, we improve public health,” Wang says. “Our patients are sicker than the general population, so by caring for them, fewer communicable diseases are transmitted, substance use is treated, etc.” She adds: “Moreover, it makes good business sense for the health system.”

In a randomized control trial looking at 200 recently released prisoners in San Francisco, Wang and her colleagues showed that bringing that population to see doctors significantly reduced emergency room visits and hospitalizations. That lessens the strain on emergency departments, and the cost burden that emergency treatment puts on the health care system.

Wang works at the New Haven clinic, which gets additional funding from the Community Foundation for Greater New Haven, the Yale-New Haven Hospital and the Substance Abuse and Mental Health Administration.

The staff starts off the morning by running through a list of the patients coming in. One patient is worried about relapsing on a drug addiction and wants to talk about options for staying clean. Another patient with an infection in his leg has finally gone to see orthopedics.

“That was a huge accomplishment. Getting him to an appointment is a feat,” says Dr. Lisa Puglisi, one of the physicians at Transitions. 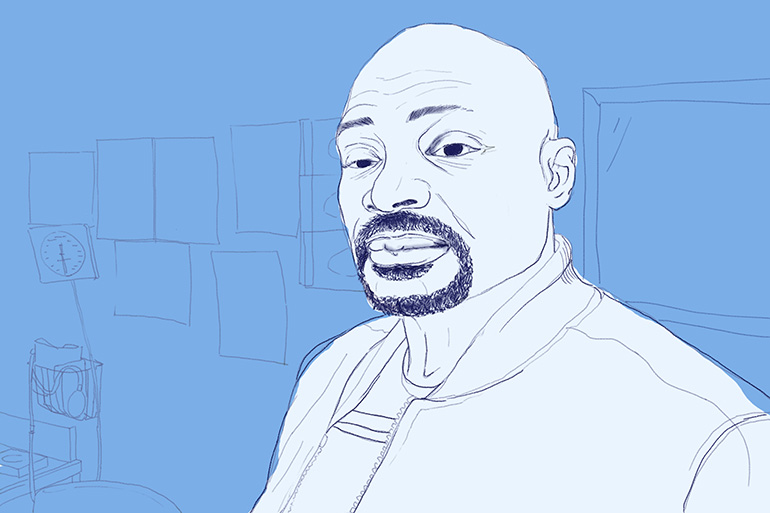 The patient came to his appointment because of Jerry Smart. As a community health worker with Transitions, Smart is the clinic’s secret weapon, because patients might not trust doctors, but they do trust him.

“This population, you know, they’ve been dealing with probation, parole, dealing with correctional officers. So they don’t trust people,” says Smart.

Like all Transition’s community health workers, Smart knows what it’s like to be an ex-inmate. It’s been 30 years since he did time, but he remembers feeling judged by doctors, and thinking they didn’t care about his well being.

No one wants to be sick, he says, but sometimes the whole health care system can be intimidating. He’ll go with patients to their appointments, check in with some of them regularly on the phone, and he’ll even take frantic calls at 2 a.m. about whether they should go to the emergency room or not.

Mark Baskerville, who lives in New Haven, is one of the clinic’s success stories. He’s in his mid-50s, and he’s been in and out of prison four times.

On the bus coming home, he says, “First it’s anxieties that pick up: ‘Man, am I going to do all right?’ Things are in your hands and you’re in control of it now.”

Health problems are easy to push aside, he says.

Baskerville has been living with diabetes for about 20 years, about 12 of which he spent in the correctional system. He says he had five diabetic comas while he was an inmate. But since reentering the community, he’s come for regular visits at the clinic and says he’s doing better.

“It was easy. I know what I got to do to take care of my diabetes. You got to work with your doctor,” says Baskerville.

If you don’t, he says, you’ll never be able to enjoy your freedom.

Helping Ex-Inmates Stay Out Of The ER Brings Multiple Benefits