Hepatitis C is a life-threatening infection that attacks the liver, but the symptoms often don’t show up for years. So Dr. Alex Federman, an internist at a primary clinic at Mt. Sinai Hospital in New York City, makes sure he urges testing for many patients.

“We’re recommending now everybody born between 1945 and 1965 get … screened once in their life for hepatitis C,” he tells Patricia Rowe, a new patient. She quickly agrees, noting that as a 66-year-old nurse, she may at some point have been pricked by a needle and been exposed to the virus.

Other New York physicians may soon be following Federman’s lead because the New York legislature has passed a bill that would make the state the first to require doctors to offer the hepatitis C test to those baby boomer patients. 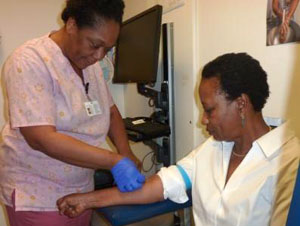 Hepatitis C, which is transmitted by blood contact, can cause liver failure and cancer.  The Centers for Disease Control and Prevention estimates that more than 3 million people in the United States have it, and it has recommended that all baby boomers be tested since they are five times more likely than the general population to have been exposed to contaminated blood.

The agency notes that “before 1992, when widespread screening of the blood supply began in the United States, hepatitis C was commonly spread through blood transfusions and organ transplants.”

For years, doctors mainly offered tests to at-risk populations, including IV drug users and people who recalled having blood transfusions prior to 1992. Experts had thought that testing other groups would cost a lot and not pick up many infections, and as of now, treatment can have severe side effects.  But Dr. Brian Edlin, from Weill Cornell Medical College in New York City, estimates screening boomers could detect around 800,000 people nationwide with the disease.

The U.S. Preventive Services Task Force, which advises policy officials and physicians on screening and treatments, last month recommended that all physicians offer the testing to patients born between 1945 and 1965.

Putting the guideline out there is one thing, but getting doctors to offer the test to patients is another.

Dr. Jay Varma, the Deputy Commissioner for Disease Control in New York City’s health department, says getting the attention of providers is an ongoing challenge.

“There has been a bit of guideline and recommendation overload,” he says.  “Every major journal you look at will start to now recommend screening for this new disease, or this type of screening test for an old disease.”

All this, when doctors have less and less time to talk to patients.

The New York bill’s author, state Rep. Kenneth Zebrowski, says he wanted to give some teeth to the federal guidelines.

“When you codify something, and it goes into the public health law, doctors will follow it,” said Zebrowski, whose father died in 2007 of hepatitis C, which he contracted through a blood transfusion decades earlier.

But the Medical Society of the State of New York opposes the bill. The group doesn’t object to screening, but they say that the law is an “very direct intrusion” on the physician-patient relationship – and that health experts, not politicians, should create health regulations.

The bill is on the desk of Gov. Andrew Cuomo.

This story is part of a collaboration that includes WNYC, NPR and Kaiser Health News.