An estimated 2.5 million young adults have gained health insurance coverage since the 2010 health law took effect, according to a new government survey – a finding the Obama administration is embracing as it continues efforts to communicate the health’s law’s benefits, even as the public’s opinion about the law remains mixed. 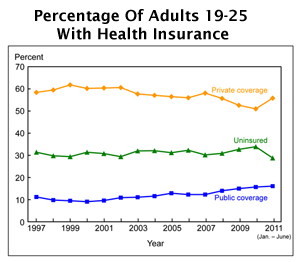 The number is “even higher than many predicted,” said Kathleen Sebelius, the Health and Human Services Secretary, in an announcement Wednesday. An earlier federal analysis projected an increase between 0.7 and 2.1 million.

“This shows that the need [for coverage] was really great,” added Sherry Glied, HHS assistant secretary for planning and evaluation. “We’re glad to see people are responding.”

HHS previously estimated that nearly 1 million adults had gained coverage through March 2011. The 2.5 million number reflects those who became insured through June 2011, and it focuses on the change since September 2010, rather than using data from 2010 as a whole. The health law provision requiring insurers to allow parents to keep dependents younger than age 26 on their family policies kicked in Sept. 23, 2010.

Officials based their number on U.S. Census data and the results of the latest National Health Interview Survey. In September 2010, the survey found 64.4 percent of adults between 19 and 25 were insured. By March, the rate was up to 69.6 percent, and in June it was at 72.7 percent. That month, the uninsured rate for this population reached its lowest point in more than a decade, down to 28.8 percent.

Federal officials also said the Centers for Disease Control and Prevention data clarify the link between the health law’s under-26 provision and the coverage expansion. For the first time, they compared the coverage rates for ages 19-25 with ages 26-35. The latter remained stable between September 2010 and June 2011, and has now replaced their younger counterparts as the age group most likely to be uninsured.

“This comparison makes it clear that the increase in coverage among 19 to 25 year-olds can be directly attributed to the Affordable Care Act’s new dependent-coverage provision,” notes the HHS report.

Most of the newly covered 19-to-25-year-olds are going into private plans, likely their parents’ employer-sponsored insurance. According to the CDC data, 55.8 percent are now covered by a private plan, compared to 51.0 percent in 2010. Public health plan coverage, including Medicaid, remained stable.