The Obama administration answered a key question from governors on Monday with a clear “no”: States may not expand Medicaid only part of the way and still get the additional federal funding provided in the Affordable Care Act.

The decision, announced by Health and Human Services Secretary Kathleen Sebelius in a letter sent to governors, is significant because after the Supreme Court ruling in June made the Medicaid expansion optional, several states have floated the idea of a less generous expansion than called for in the federal health law. 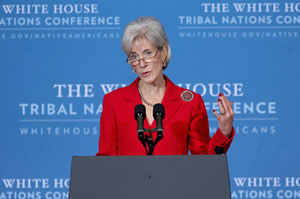 In a letter to governors, HHS Secretary Kathleen Sebelius, shown here speaking at a conference in Washington last week, says states that expand Medicaid must cover people making up to 138 percent of the federal poverty level to get enhanced funding (Photo by Chip Somodevilla/Getty Images).

The health law requires Medicaid to expand in 2014 to cover anyone earning up to 138 percent of the federal poverty level, or nearly $32,000 for a family of four. Monday’s decision from HHS means that states will not be able to expand the program up to, for instance, 100 percent of the federal poverty level, and still receive the full funding provided by the health law.

Under the law, the federal government will cover all of the costs of the new Medicaid beneficiaries from 2014 to 2017; it then phases down to 90 percent of funding in 2020, with states picking up the rest of the tab. However, the Supreme Court last summer ruled that states could not be compelled to expand their programs at the risk of losing the rest of their Medicaid funding. The Supreme Court decision left many questioning just how flexible the expansion of Medicaid could become.

HHS said the states could seek a waiver in 2017 for a partial expansion. However, states will only be able to get a waiver if they can show they would still be providing similar coverage and benefits as called for under the law. That means a state would have to find a way to cover people up to 138 percent of poverty level if it chooses not to make that group eligible for Medicaid.

Cindy Mann, who oversees Medicaid as deputy administrator of the Centers for Medicare and Medicaid Services, said the health law does not allow the administration legal flexibility to permit a partial expansion while the federal government is paying the full cost of expansion. She refused to say whether the decision would limit the number of states that expand Medicaid starting in 2014. “We are optimistic that they (states) will move forward.”

Matt Salo, the executive director of the National Association of Medicaid Directors, said while HHS did not give an answer that “a number of states were hoping for, the clarity of the answer is important for all states currently preparing their budgets for next year.”

In a posting on the HealthCare.gov blog, Sebelius said that “while the law does not create an option for enhanced match for a partial or phased-in Medicaid expansion … we will consider waivers at the regular matching rate now and, in 2017 when the 100 percent federal funding for the expansion group is slightly reduced, broad-based State Innovation Waivers.”

The Sebelius letter to governors comes nearly a month after the Republican Governors Association sent a letter to the White House with requests regarding state implementation of the health law. The Republican governors, who will lead 60 percent of states starting in January 2013, posed 20 questions regarding exchange implementation and 14 regarding Medicaid expansion and stated that they would not be able to move forward unless the questions were addressed by HHS.

Louisiana Gov. Bobby Jindal, the RGA chairman, criticized the HHS decision. “The Obama administration’s refusal to grant states more flexibility on Medicaid is as disheartening as it is short-sighted,” Jindal said in a statement. “The president knows the current Medicaid system is broken, and it is an inefficient mechanism for expanding coverage. While the administration’s answer will make a state’s decision on Medicaid expansion more difficult, governors will continue to ask the president to pursue real Medicaid reform and we hope he will join us.”

Sebelius also said the administration would not seek to reduce federal Medicaid funding to states by blending various Medicaid matching rates —the regular Medicaid rate, the enhanced Medicaid rate under the law and the rate under the Children’s Health Insurance Program.

The “blended rate” had been floated as a way to help reduce federal Medicaid spending and cut the federal deficit.

“In essence it seems like it’s taking Medicaid off the table” in any discussion of controlling Medicaid spending as part of the fiscal cliff, said Nina Owcharenko, director of the conservative Heritage Foundation’s Center for Health Policy Studies.

Salo also noted the announcement about blended rates. “Governors and other state officials have been voicing their strong concern over that proposal, and others (like provider tax reductions), that would simply shift costs to states and could negatively impact their decisions on the expansion option.”

At least nine states including Texas and Florida and have said they would not expand Medicaid, because they worry about costs the state would face, particularly when federal funding pares down starting in 2017.

Seventeen states have said they will participate in the Medicaid expansion, according to consulting firm Avalere. Most states are still undecided, and they have no deadline to make a decision.

In her blog post, Sebelius outlined other points of the guidance being provided to states and gave a conditional approval to exchange plans submitted by Colorado, Connecticut, Massachusetts, Maryland, Oregon and Washington.

That announcement came just hours after Tennessee and West Virginia became the latest states to reject doing a state-run online marketplace. Only 14 states and the District of Columbia have committed to building a state exchange. Friday is the deadline for states to decide. States have until February to decide if they want to build an exchange in partnership with the federal government. If neither option is chosen, the federal government will operate an exchange in their state.

The Obama administration this summer said states could decide to expand Medicaid in 2014 — with the full federal funding — and then drop it at a later date. But such a decision is politically risky, because state officials don’t want to be in a position of eliminating coverage.

Bruce Siegel, CEO of the National Association of Public Hospitals and Health Systems, said he was thrilled with Monday’s decision.

“We are greatly encouraged by the Centers for Medicare & Medicaid Services’ decision today to pursue an expansion of Medicaid consistent with the scope of the Affordable Care Act,” he said in a statement. “The agency’s guidance follows the letter and spirit of the law and takes an important step toward significantly reducing the ranks of the uninsured.”

“We look to the promise of reform to expand health care coverage as broadly as possible and call on lawmakers to preserve the funding we have.”

Judith Solomon, vice president for health policy at the left-leaning Center on Budget and Policy Priorities, said the decision will remove a big uncertainty facing states about the Medicaid expansion. It would also help interested parties such as hospitals and consumer groups which are about to start lobbying states to expand Medicaid.

“The problem has been a lack of clarity and this decision drives clarity on what the rules of the game are,” Solomon said.

She said the question over whether states could partially expand and still get the extra federal Medicaid money has been a distraction to groups pushing for states to participate in the expansion. “Now we know if states want the higher federal match rates you are not talking 100 percent or 90 percent or 75 percent (of the federal poverty level),  you have to cover the intended population.”

“I realize that there will be many people who think that this was a highly political call. I think that is not true,” Rosenbaum said. “I think this is a case where the administration made absolutely the correct and essential legal call. What (states) can’t do is get the enhanced rate for doing anything other than what Congress specifically tied the enhanced rate to. It’s one of those times – I realize there are few of them in Washington, D.C. — when the law is quite clear.”

HHS Tells States It Will Not Fund Partial Medicaid Expansion