With the highest rate of uninsured people in the country, it’s not that hard to find someone like Tammy Boudreaux in Texas. 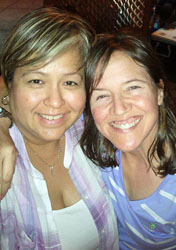 Boudreaux, 43, lives just outside of Houston and works as a psychiatric social worker on a freelance basis, with no benefits.

This year Boudreaux estimates she spent about $1,500 on medical care, including a trip to the ER for a cut finger. She also takes a few prescription medications and occasionally sees a psychiatrist and a nutritionist.

She can’t get insurance through her partner, because her partner’s employer doesn’t offer benefits to same-sex couples.

And, Boudreaux has been skipping mammograms and other check-ups for a few years. “It’s worrisome,” she says. “It’s like gambling. Gambling with my health, and it is very frustrating.”

Boudreaux was hoping to find a better deal on healthcare.gov. Boudreaux has logged on, looked at the plans, and so far, remains largely unimpressed.

She likes the monthly premiums that she sees but balks at the annual deductibles.

As a comparison, the average deductible for single coverage in employer sponsored insurance is about $1,135, according to the Kaiser Family Foundation. (KHN is an editorially independent program of the foundation.) 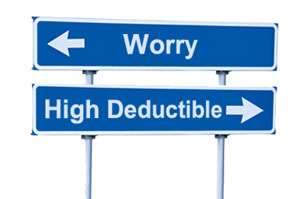 Boudreaux could get a lower deductible if she paid a higher premium, but about $200 a month is all she feels she can afford. She doesn’t qualify for subsidies to help pay for a policy, either.

“I don’t smoke, I’m relatively healthy, so I was pretty insulted when I saw this [price],” she says. “I was extremely angry actually. I felt hoodwinked by the insurance companies: ‘Oh here’s this wonderful insurance plan but by the way you need to come up with $6,000 out-of-pocket first before we pay for anything.'”

That reaction is typical, says Caroline Pearson, an analyst and expert on the new health insurance marketplaces for the consulting firm Avalere Health.

“A lot of people aren’t ever going to get out of that deductible,” says Pearson. “Only if you have a catastrophic health event or you’re really chronically ill will you ever hit your out-of-pocket cap. People are left, I think, feeling like ‘I spent a lot of money this year on premium and I didn’t get any meaningful coverage from my insurance.'”

But Pearson says people forget two things if they just focus on the high deductible. One is that the new plans must offer some free preventive services, like mammograms and yearly physicals. The other is that having a plan protects you from medical bankruptcy if you get in an accident or face something like a cancer diagnosis.

That’s because Affordable Care Act requires that health plans have a yearly limit on out-of-pocket expenses.  If something did happen to Boudreaux, she wouldn’t pay more than $6,350 in the year.

Not As Generous As Workplace Coverage

Nevertheless, Pearson points out that the plans sold on the exchange are not as generous as employer-sponsored insurance. The plans have a range of deductibles, depending on which level — bronze, silver, gold or platinum – the consumer picks.

“We think most people are going to be enrolled either in silver or bronze plans, which will cover 60 to 70 percent of a person’s health care costs, and a typical employer plan covers 80,” Peason says. “So when the law was passed, by definition we knew these plans would be less generous than employer coverage. And that has definitely played out.”

Boudreaux has been managing her health needs without insurance for several years. For her depression, her doctor prescribes her double doses of her psychiatric medicines, which she then cuts in half, and because the meds are generic they only cost her about $40 per year.

But Boudreaux has considered the possibility that something catastrophic can happen.

If nothing unexpected happens, she thinks she’d pay less just continuing to go along on her own. And she could put the $200 that would go to the monthly premium into a savings account.

In any case, Boudreaux doesn’t feel any urgency to sign up right away. She’s been uninsured for a few years, so what’s a month or two more?

With the holidays coming up, this is one difficult and confusing decision she’d rather just avoid for now.

“Whoa, shut the computer. Find something else to do. There’s something much better I could be doing with my time than trying to figure out this rigmarole of insurance policies and deductibles and what’s covered and what’s preventative and what’s included and blah blah blah,” she says. “It’s not very well explained.”

If Boudreaux does not enroll in a plan by the end of March, her tax penalty would probably be a few hundred dollars – for the first year. The penalty starts out at $95 or 1 percent of income in 2014 and rises in later years.