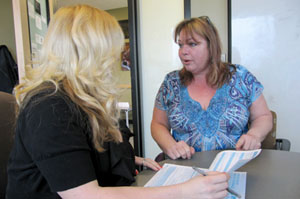 Cheryl Stumph, who owns a garage and has six children, qualifies for Oregon’s Medicaid program (Photo by Kristian Foden-Vencil/OPB).

Millions of Americans who didn’t have health insurance last year now do, as a result of the Affordable Care Act. In Lane County, Oregon, Trillium Community Health Plan is struggling to deal with a huge influx of new patients. CEO Terry Coplin says they expected 26,000 people to sign up in the first few years. Instead, about that many signed up in the first few months.

“We weren’t expecting to get such a large assignment of patients in the first two months,” says Coplin. “These patients who are coming onto the program, many have not seen a physician for years. We’re dealing with not just a large number of patients, but also what appears to be a much sicker population of patients.”

Cheryl Stumph is one of them. She and her husband Mike run Green Streak Automotive, an all-service garage.

“Cars and trucks and tractors and generators and lawn mowers and boats and motor homes and I think the only thing I haven’t done, or my husband hasn’t done is an airplane, so far,” she says.

In November of last year, Stumph’s 27-year-old son had a stroke and died at the wheel of his tow truck. The stroke stemmed from a genetic problem so Stumph spent this winter worrying about her six other kids. Genetic testing is expensive and she didn’t have health insurance.

But now she and her family get Medicaid through Trillium Health.

“That was really relieving,” says Stumph. “You know, because we can check on the other kids and maybe not lose them. And oh my God, we’re 50 and aren’t there things we’re supposed to do at this age of our lives? And you know, we’re doing it, and it’s great. It just gives you hope.”

She’s thrilled to be able to get a mammogram and treatment for a long-term infection she’s been dealing with. The kids can get genetic testing and her husband too, she says, has a chronic medical problem that needs attention.

Stories like Stumph’s are being repeated across Oregon, and it’s overwhelming Trillium Health.

Trillium’s Coplin says the coordinated care organization has come up with a four-part plan to deal with this unexpected influx.

First, it will pay bonuses to doctors who accept new members.

Second, Trillium is granting Lane County $900,000 to open a new clinic in an existing building. A custom build would take too long. “They have proposed ways that they can get this clinic up and running by mid-year,” says Coplin.

Third, Trillium is hiring a consultant to see if existing clinics can increase efficiency, for example, by changing who fills out forms.

“Having physicians do clerical work is really a waste of valuable resources,” he explains.

And finally, Trillium is offering half a million dollars to any clinic or group of physicians willing to expand their practice to take on another 5,000 adults.
Meanwhile, Trillium has some short-term fixes to help new enrollees find doctors in the area.

But someone who is suffering with a minor complaint can fall through the cracks.

“We have a shrinking pool of providers and we have a growing need in an aging population for health care. So that’s pretty classic irresistible force meeting an immovable object.” It’s tough to have those two circumstances in the same environment, he says, “so we need to get creative and that’s what we’re doing.”

Cheryl Stumph is pleased to be getting treatment, but it hasn’t all been easy. “It took a month I think to get the first appointment for my husband,” she says.

They’ve been for several appointments and the doctor told Stumph she’d have to give up smoking, get a little more exercise and follow all the usual doctor recommendations. She says she is working on it.

This story is part of a partnership with NPR, Oregon Public Broadcasting and Kaiser Health News.