The tens of thousands of people with a history of serious illnesses who are enrolled in high-risk insurance pools created under the health care law will have an additional two months — until March 31 — before they lose that coverage, the Department of Health and Human Services announced Tuesday.

Late last month federal officials announced that they would extend the Pre-Existing Condition Insurance Plan (PCIP) — scheduled to close at the end of 2013 —until the end of this month to give people more time to enroll in health plans through state and federal insurance enrollment websites, many of which have been riddled with problems. The federal high-risk pools, which started in 2010, have helped people with pre-existing conditions obtain health coverage because they were often turned away by commercial insurers. 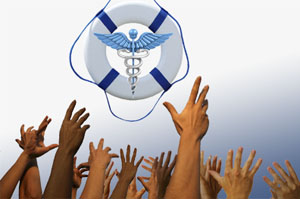 HHS spokeswoman Erin Shields Britt said in an email Tuesday that “as part of our continuing effort to help smooth consumers’ transition into Marketplace coverage, we are allowing those covered by PCIP additional time to shop for new coverage while they receive the ongoing care and treatment they need.”

Enrollees in the high-risk pools must select a new plan by March 15 to avoid a gap in coverage, according to HHS. Open enrollment for the health law ends March 31. The current enrollment in both state and federal PCIP programs is less than 30,000, down from 85,000 in October, according to an HHS official.

The extension is one in a series that federal officials have granted to help consumers enroll in the health law’s online marketplaces, or exchanges, after website problems frustrated millions of potential enrollees.

The high-risk pool, or PCIP, program, was supposed to end Dec. 31. Beginning this year under the health law, insurers are no longer able to reject people or charge them higher rates as a result of their medical history.

The extension of coverage will be paid for with existing program funds. More than $4.7 billion has been spent of the $5 billion appropriated by Congress for the program.

The federal announcement also means that some states that run their own PCIP programs have the option of continuing coverage through the end of March.

Consumer advocacy groups welcomed the extension since many individuals in the high-risk pools are receiving regular treatments for diseases such as cancer, diabetes, and heart disease.

“Today’s announcement ensures that people with pre-existing conditions such as a history of cancer have life-saving coverage under the Pre-Existing Condition Insurance Plan through the end of open enrollment,” said Steve Weiss, senior director, communications and media advocacy for the American Cancer Society Cancer Action Network, Inc.   “The extension gives cancer patients and others who had no health insurance options before enrolling in PCIP extra time to choose a marketplace plan that works best for them and their families.”

The PCIP program has helped more than 135,000 Americans since it began in late 2010. The federal program suspended acceptance of new enrollees in mid-February, while state-based pools closed their doors on March 2 because of funding concerns.

This article was updated to reflect new PCIP numbers from HHS.