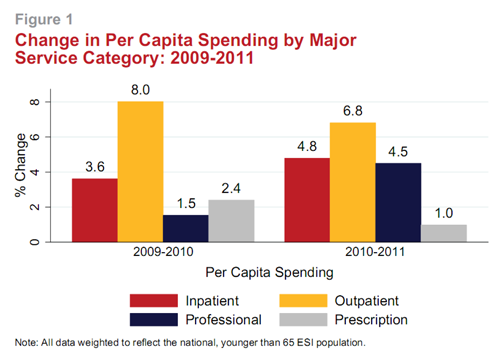 Spending on medical care for Americans with job-based insurance rose 4.6 percent last year, driven mainly by higher prices charged by hospitals and other medical providers, a report out today says.

The growth came despite a sluggish economy which some economists thought would translate into more modest spending growth. Still, last year’s per enrollee increase ranks below the 5.8 percent increase in 2009, according to the Health Care Cost Institute, a nonpartisan research group funded by insurers.

It isn’t clear from the data whether last year’s uptick represents a return toward  the higher averages of the past – or whether it was an anomaly within a general slowdown, said David Newman, executive director of the institute.  The institute noted the 2010 slowdown in its first report, which documented a 3.8 percent spending increase for privately insured Americans that year.

The current report found that employers in the Northeast spent the most on health care last year, at $4,659 per enrollee, while those in the West had the lowest tab at $4,358.

The data are based on 6 billion actual claims paid by insurers covering about 40 million people, representing one of the broadest looks at spending by employers for medical services.  The data do not include spending for people covered by Medicare, Medicaid, or for those who buy their own coverage.

The data – available for free to researchers, employers and consumers – can help those who negotiate for health coverage “to ask what justifies price increases that are two and three times inflation,” says Newman.

While the Consumer Price Index rose 3.2 percent between 2010 and 2011, for example, the average price for inpatient hospital care rose 5.3 percent. That increase occurred as admissions declined half a percentage point, the study found.

Reports by other organizations released this year showed that the overall slowdown in medical spending seen in the past few years has had an impact on insurance costs. Premiums rose for employers at moderate rates by historical standards, according to a report out earlier this month by the Kaiser Family Foundation. That report found that premiums rose, on average, 4 percent for family coverage in 2012, well below last year’s increase and half the 8 percent average of the previous decade. (KHN is an editorially independent program of the foundation.)