Inside the Fox Studios in Century City, crews are shooting the latest episodes of some of television’s biggest shows, including “Modern Family,” “How I Met Your Mother” and “Bones.” Just outside the lot, crew members on breaks are lining up at a mobile health clinic in a converted Winnebago, seeking treatment for both chronic diseases and common ailments.

The Hollywood film and television industry relies heavily on freelancers and independent contractors who are rarely offered health insurance from an employer. Throughout Southern California, producers, writers, actors, editors, camera operators and prop makers move from gig to gig and hold numerous jobs each year. Some get insurance through the industry’s unions – after paying hefty fees and dues and working enough hours on union jobs. Others pay for private policies – or simply go without. 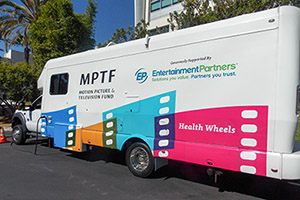 The nation’s health law will offer financial help for those who buy policies through new insurance marketplaces and whose incomes are within the limits. But contract workers, freelancers and seasonal employees in a variety of industries will fall in and out of eligibility for subsidies, causing confusion and possible tax consequences at the end of the year.

Entertainment workers face an additional challenge on top of the constant job turnover and temporary nature of their employment. Crew members often work long hours rigging lights, moving gear and building sets, which can lead to injuries and high levels of stress.

Because their employers don’t often provide insurance, entertainment professionals say they have to get creative. They stock up on medications. They rely on spouses’ insurance. They take flexible day jobs.  They even get married just to have steady coverage. They see all their doctors while they are covered – and then go weeks or months without medical care.

“They try to stay employed,” said Bob Beitcher, chief executive officer of the Motion Picture & Television Fund, a charity that provides health and social services for entertainment workers. “Then they pray they don’t have health issues when they are not employed.”

The health law was not designed for the entertainment industry, Beitcher said. The fund offers a temporary program for uninsured production workers to get affordable doctor’s visits. “This industry is unique,” he said. “Getting it right for this group the first time around was unlikely.”

Cat Rhinehart, a comedian living in Los Angeles, hasn’t had regular coverage for years. When she paid $400 a month for insurance, she went to the doctor frequently. Now uninsured, Rhinehart receives most of her medical care at Planned Parenthood. “I used to be a hypochondriac, but now I can’t really afford to be,” she said. At the same time, Rhinehart said she knows she needs to be vigilant about her health, especially since her sister was diagnosed with breast cancer at 28.

‘A Rock And A Hard Place’

Gretchen Somerfeld, who works as a script supervisor, production manager and a voiceover artist, pays for her own insurance. She has worked in the entertainment industry for 26 years, mostly in commercials, and typically works about 50 different jobs in the course of one year. Occasionally, she works enough hours on union jobs that she qualifies for coverage, but Somerfeld said she can’t depend on it. Her current insurance, which costs more than $600 a month with a $3,000 deductible, doubled after she started taking medication for high cholesterol.

Somerfeld supports the Affordable Care Act but doubts it will help her. Somerfeld, who is single, earns on average about $50,000, which puts her just above the limit to receive insurance subsidies through the state’s health exchange.

“At first, I was excited about Obamacare,” she said. “Now I think I might fall between a rock and a hard place. It is very frustrating.”

If You’re Sick, You Don’t Work

Dennis Green, the doctor who goes from studio to studio with the mobile health van known as Health Wheels, said that many of these workers – even those with insurance – don’t get to the doctor regularly. He treats patients with high blood pressure and diabetes, many of whom can’t afford to miss work for a medical appointment, or risk losing their jobs if they do. The 35-foot clinic run by the Motion Picture & Television Fund, has two exam rooms, a bathroom and a small bench where patients can wait to see the doctor. 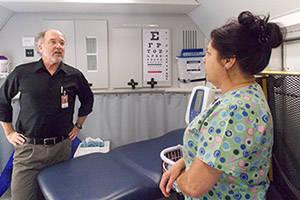 On a recent morning, Megan Cannon, a set decorator on “Bones,” wanted a referral to a dermatologist. Cannon, who is covered through a union, said being able to go to an appointment while at work helps her take better care of herself, she said.  “It’s difficult for me to take time to see a doctor,” she said. “Our schedules are ever fluctuating.”

Green said aside from the convenience, the mom-and-pop nature of the mobile center helps crew members feel more comfortable. And he is able to see them quickly on their breaks, regardless of their insurance.

“We’ll roll onto the lot with one person on the schedule,” he said. “And we’ll fill up.”

Hollywood production companies, too, are trying to figure out how to comply with the Affordable Care Act’s employer mandate, set to begin in 2015. Production companies typically don’t know much about insurance and will have to figure out who they have to cover and how to avoid penalties, said Mark Goldstein, CEO and president of Entertainment Partners, which provides production management and payroll services to companies.

“For many of them, this is going to be a whole new world,” he said. “Everyone is definitely scrambling to figure out how it is going to apply to them.”

Having insurance is critical for Dean Menta, a music editor who underwent two heart surgeries in his 30s. A few years ago, Menta took a corporate job at a videogame company to have more steady insurance after it became harder to get enough union jobs to stay covered. But then the company closed.

Menta said he has already started talking to an insurance broker and is looking into plans for him and his family through the Affordable Care Act. Right now, between his COBRA plan and the plan for his wife and children, Menta’s family pays over $1,000 a month. He recently got a television job, which he is hoping will give him enough hours to get less expensive insurance again.

Jim Westrick, 35, isn’t sure yet whether he will qualify for subsidies because his income as a television assistant editor fluctuates from year to year. Currently, he pays for his own insurance – about $170 a month with a $3,000 deductible. Despite the cost, Westrick said he wouldn’t give it up because he worries about getting hurt or sick and ending up bankrupt.

Westrick said he considers having to pay for his own coverage an “occupational hazard.” “The freelance film and television world — that’s how it has always been,” he said.