Within two weeks of Joyce Oyler’s discharge from the hospital, sores developed in her mouth and throat, and blood began seeping from her nose and bowels.

Her daughter traced the source to the medicine bottles in Oyler’s home in St. Joseph, Missouri. One drug that keeps heart patients like Oyler from retaining fluids was missing. In its place was a toxic drug with a similar name but different purpose, primarily to treat cancer and severe arthritis. The label said to take it daily.

“I gathered all her medicine, and as soon as I saw that bottle, I knew she couldn’t come back from this,” said the daughter, Kristin Sigg, an oncology nurse. “There were many layers and mistakes made after she left the hospital. It should have been caught about five different ways.”

Oyler’s death occurred at one of the most dangerous junctures in medical care: when patients leave the hospital. Bad coordination often plagues patients’ transitions to the care of home health agencies, as well as to nursing homes and other professionals charged with helping them recuperate, studies show.

“Poor transitional care is a huge, huge issue for everybody, but especially for older people with complex needs,” said Alicia Arbaje, an assistant professor at the Johns Hopkins School of Medicine in Baltimore. “The most risky transition is from hospital to home with the additional need for home care services, and that’s the one we know the least about.” 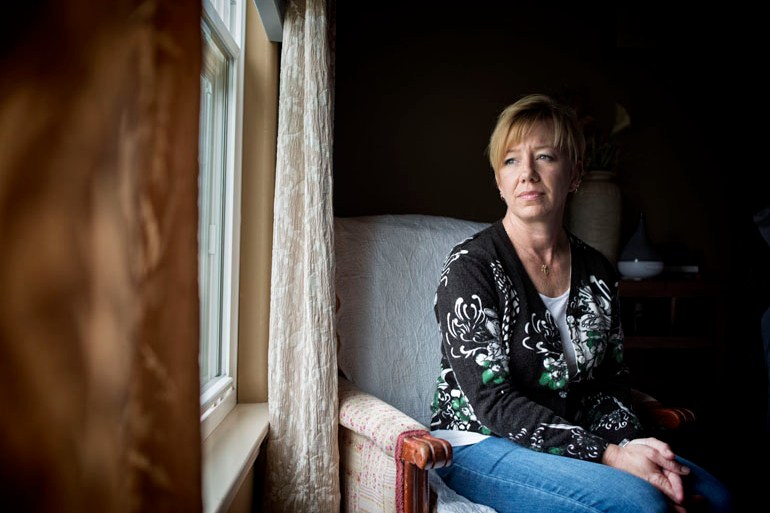 Kristin Sigg’s mother, Joyce Oyler, died after receiving the wrong medication after leaving the hospital. “There were many layers and mistakes made after she left the hospital. It should have been caught about five different ways,” she said. (Travis Young/Austin Walsh Studio for KHN)

Medication mistakes like the one in Oyler’s case — which, according to court records, slipped past both her pharmacist and home health nurses — are in fact one of the most common complications for discharged patients. The federal government views them as “a major patient safety and public health issue,” and a Kaiser Health News analysis of inspection records shows such errors are frequently missed by home health agencies.

Between January 2010 and July 2015, the analysis found, inspectors identified 3,016 home health agencies — nearly a quarter of all those examined by Medicare — that had inadequately reviewed or tracked medications for new patients. In some cases, nurses failed to realize that patients were taking potentially dangerous combinations of drugs, risking abnormal heart rhythms, bleeding, kidney damage and seizures.

The variety of providers that patients may use after a hospitalization — including pharmacies, urgent care clinics and a range of specialists — creates fertile ground for error, said Don Goldmann, chief medical and scientific officer at the nonprofit Institute for Healthcare Improvement. “This episodic care at different places at different times is not designed to keep the overall safety of the patient in mind,” Goldmann said.

One factor is the lack of organization and communication among these other parts of the medical system. Of the $30 billion that Congress appropriated to help shift the system to electronic medical records — to ensure better coordination of care and reduce errors across the board — none went to nursing homes, rehabilitation facilities or providers working with individuals in their homes. 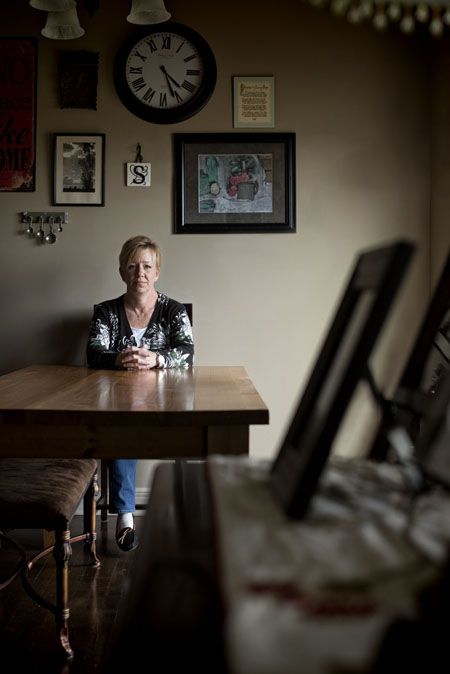 Sigg says many people don’t know that lapses in communication sharing among doctors can lead to danger for patients. (Travis Young/Austing Walsh Studio for KHN)

“In retrospect, that might have been a mistake,” said Robert Wachter, a professor at the University of California, San Francisco who studies patient safety. “The systems are not adequately connected.”

At any point, problems can occur:

— At hospitals, where federal data show that fewer than half of patients say they confidently understood the instructions of how to care for themselves after discharge.

— In nursing homes, where case management frequently comes up short. A 2013 government report found more than a third of facilities did not properly assess patients’ needs, devise a plan for their care and then follow it through.

— At pharmacies, where counseling and reviewing drugs with patients is often pro forma, and better exertions do not always help. A 2012 study in the journal Annals of Internal Medicine found that half of patients had a clinically significant medication error within a month of discharge from two highly regarded academic medical centers. The study found that these errors persisted even when pharmacists took a more active role in counseling the patient and reviewing the prescription.

— And at home health agencies, where failures to create and execute a care plan are the most common issues government inspectors identify, followed by deficient medication review, according to KHN’s analysis. Over the first half of this decade, 1,591 agencies — one in eight — had a defect inspectors considered so substantial that it warranted the agencies’ removal from the Medicare program unless the lapses were remedied.

Oyler’s death in October 2013 shows how a fatal mistake can slip by multiple checkpoints. The 66-year-old retired safety manager left Heartland Regional Medical Center in St. Joseph after being treated for congestive heart failure, in which the heart fails to pump effectively, causing fluid build-up in the lungs, shortness of breath and swelling in the feet. She returned home as a hospital nurse telephoned the local Hy-Vee Pharmacy with eight new prescriptions. One was for the diuretic metolazone.

But the medications a pharmacy technician wrote down did not include metolazone. Instead it listed methotrexate, which can damage blood cell counts, organs and the lining of the mouth, stomach and intestines. The drug is so potent that the Institute for Safe Medication Practices includes it among eight “high-alert” medications with consequences so “devastating” that they warrant special safeguards against incorrect dispensing.

Oyler’s prescription included daily dosage instructions for the diuretic. Methotrexate is never supposed to be taken more than once or twice a week for patients not being treated for cancer, and almost always at a much lower dose. 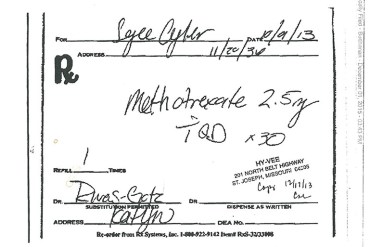 Joyce Oyler’s prescription was written for a toxic drug instead of a common diuretic.

“Here’s a drug that every patient, even if it’s on the refill, should get counseled on, why they’re taking methotrexate and how they’re taking it because of the mistakes of errors we’ve seen with the daily dosing rather than the weekly dosing,” said Allen Vaida, a pharmacist and executive vice president at the Institute for Safe Medication Practices.

In a court deposition taken as part of the lawsuit the family brought, Hy-Vee’s pharmacist blamed himself for not catching the error. “For whatever reason, on that certain day, that didn’t trigger with me,” he said. Hy-Vee argued that its safeguards were as strong as at other pharmacies, although the pharmacy manager admitted in a deposition that “quite honestly, there was a breakdown in the system.”

The family’s attorney, Leland Dempsey, said court evidence suggested the drug mix-up was made by the pharmacy technician who transcribed the prescription orders. “The pharmacy tech made numerous spelling errors on the drugs,” he said. “She had a dosage off on another drug.”

In February, a jury awarded Oyler’s family $2 million in damages from the pharmacy. The judge lowered the award to $125,000 because of Missouri’s cap for non-economic damages in medical malpractice cases. Hy-Vee declined to comment.

Yet the error could have been caught right away as Oyler began getting care from Heartland’s home health care agency. Medicare requires home health agencies to examine details of a patient’s medications to ensure all the drugs match the prescriptions ordered, are being taken in the right dose and frequency, and don’t have negative interactions.

Less than a year before, Missouri state inspectors had cited the agency for inadequately reviewing medications for three patients, and the agency had pledged to make improvements, records show. Still, neither of two agency nurses who visited Oyler at home stopped her from taking the wrong drug.

“Why they didn’t catch it was beyond me,” her husband, Carl, said recently. “They had a printout from the hospital,” with every medication correctly listed. “It was all there,” he said. 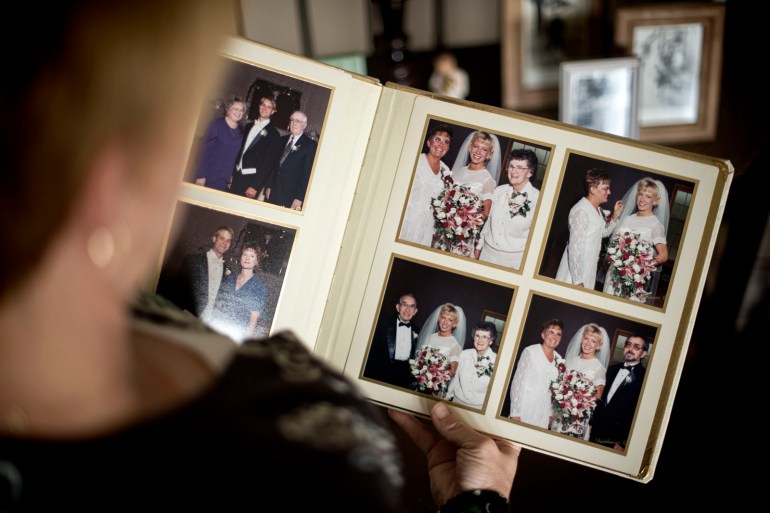 Kristin Sigg looks at wedding photos that include her mother. (Travis Young/Austin Walsh Studio for KHN)

After 18 days, her family took her to North Kansas City Hospital, where doctors determined that the methotrexate had irreparably damaged her bone marrow’s ability to create blood cells. She died three days later of multiple organ failure.

“By the time we got her into the emergency room, essentially she had no blood cell count,” her husband recounted. “It was irreversible. It was a gruesome, slow, painful way to die.”

Heartland Regional Medical Center paid Oyler’s family $225,000 in a settlement, court records show. Mosaic Life Care, the name by which Heartland now operates, said in a statement that it is “consistently improving processes and adopting new technologies to further reduce risks of errors and to improve communication.”

“Most people don’t know this is a problem,” Sigg said. “They assume doctors are talking to each other, until they experience it, and it’s not the case.”

If you’d like to share your reaction to this article and your experience with a home health agency, you can contact Kaiser Health News. Send an email to patients@kff.org.

Hospital Discharge: It’s One Of The Most Dangerous Periods For Patients