As a home health aide, Nicole Fletcher, 40, provides personal assistance to the elderly, disabled and those living with chronic conditions in their own homes. She assists them with activities of daily living – including bathing, dressing and eating – and, on occasion, she often stays to help them overnight. 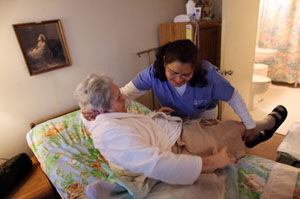 Home health aide Wendy Cerrato helps Olga Socarras get out of her bed during a visit in 2010 in Miami, Florida. The Obama administration is proposing extending overtime and minimum wage standards to many home health aides (Photo by Joe Raedle/Getty Images).

“Sometimes there will be 24-hour cases because the client needs care and cannot be left alone depending on their condition,” she said.

Working for a District of Columbia-based company, she earns more than the minimum wage and is paid time-and-a-half for every hour she works beyond her usual 40 per week. But unlike Fletcher, close to 2 million in-home care workers and personal care aides in the United States don’t always get paid for overtime work or receive minimum wage, according to the U.S. Department of Labor. They are explicitly excluded from a key federal wage law that carved out exceptions for causal babysitters and companions for people who are sick or disabled.

The average yearly salary for home health aides in 2012 was $21,830, according to the Labor Department.

Only 21 states and the District of Columbia extend minimum wage guarantees to at least some in-home care workers. Among them, 12 states have a minimum wage that is higher than the federal standard – $7.25 an hour.

The administration wants to change that, however. In December, 2011, President Barack Obama proposed a revision to the Fair Labor Standards Act that would extend both overtime and minimum wage protections to home-care workers employed by third parties, such as home care agencies. “They work hard and play by the rules and they should see that work and responsibility rewarded,” Obama said.

The proposal has been under protracted review by regulators and is now being analyzed by officials at the Office of Management and Budget. Thousands of comments have been filed with the government on the plan.

When a 90-day review window came and went on April 15, key supporters of the proposal organized a conference call urging the Obama administration to expedite the change.

Bruce Vladeck, who ran Medicare and Medicaid under President Bill Clinton and is now a senior adviser at the consulting firm Nexera, pointed in that call with reporters to the political power of the home care industry, which is opposing the proposal. In a subsequent interview, he said, “Based on my understanding, the OMB folks have met with industry representatives who have raised concerns publicly about the impact on them with the proposal.” He added, “It will take until somebody at the political level decides to either issue a regular order or bury it. There’s absolutely no telling.”

The plan has been criticized by some Republican lawmakers and Medicaid directors. In addition, some disability advocacy groups have complained that it will increase the health care costs for people who want to remain in their homes and avoid moving to institutional care.

If finalized, the proposal would redefine “domestic service employment” to include home health aides and personal care aides as domestic workers. It would also narrow the definition of “companionship services” and clearly outline what duties would qualify for overtime pay. For example, medically related tasks that generally require prerequisite training, such as wound care and blood pressure testing, would become eligible.

“The (current) rules don’t really reflect the job being done by home health aides and home care aides,” said Steven Edelstein, the national policy director of PHI National, a nonprofit group that aims to improve working conditions for direct-care workers. “When the (companion services) exception was first created, they were looking to provide an exception to friends and neighbors who would be helping out, not a situation where people are making their livelihood by providing long term services and support.”

The key stakeholders in the home care industry, however, have been less optimistic about the proposed revision, raising concerns that include higher labor costs and reduced affordability for consumers.

“Pretty much no one is not getting paid minimum wage unless it’s somebody working under the table,” said William Dombi, the vice president of the National Association for Home Care & Hospice. According to Dombi, Medicare and Medicaid pay for most of the services but they would not reimburse the businesses for overtime pay. Businesses may respond by restricting the work hours of home health aides so they would stay under the overtime threshold, potentially lowering their gross income and raising the potential for higher turnover among workers.

Peter Ross, the CEO and co-founder of Senior Helpers, an in-home senior care staffing agency based in Maryland, says paying his workers minimum wage isn’t the issue. He is more worried about the potential impact on consumers who, as a result of businesses not wanting to pay overtime, may end up having multiple caregivers.

“You want to keep consistency and continuity of care with the client because they’re most comfortable with that caregiver,” he said. “The challenge the government has to understand is if the families can no longer pay, because the government has basically put in a rule that is going to drive the costs up, then they’re going to have no choice but to go into a facility.”

The demand for home health aides is expected to increase by 69 percent between 2010 and 2020, PHI estimates, and is potentially fueled by ongoing efforts to keep seniors and the disabled out of nursing homes.

In an April 8 letter to the OMB, leaders from the National Association of Medicaid Directors said the proposal may “jeopardize” existing Medicaid delivery system models that give consumers options when hiring potential caregivers. They urged OMB to “examine the unintended consequences, cost-effectiveness, and alternatives to this complicated and burdensome rule.” According to NAMD, Medicaid was the single largest payer of spending on long-term care services and supports for home-based care in 2009 – paying more than $126 billion that year.

Edelstein and his colleagues at PHI, however, disagree. “The truth is that these protections have been provided to workers in some states already under state law,” said Edelstein, “There isn’t an issue in terms of the affordability of these services. It’s not causing more people with long-term care needs to have to get their care in nursing homes rather than at home.” According to a PHI report, rates of institutionalization are not higher in states that currently extend minimum wage and overtime protections to home care workers.

Marla Lahat is the executive director at Home Care Partners, the agency that employs Fletcher. Lahat says that employers arguing against minimum wage and overtime protections are missing the bigger picture and said her agency’s home health aides are paid for overtime work even though the District of Columbia only extends minimum wage provisions and not overtime to in-home care workers.

“This is a job that requires training, it requires skills, it requires compassion, it requires the ability to work independently,” she said. “It’s a very challenging, demanding, yet gratifying job but at a minimum should be getting minimum wage and overtime protection.”