Symphonie Dawson was 23 and studying to be a paralegal while working part-time for a temporary staffing agency when she learned that the reason she kept feeling sick was because she was pregnant.

Living with her mom and two siblings near Dallas, Dawson worried about what to expect during pregnancy and what giving birth would be like, not to mention how to juggle having a baby with being in school. 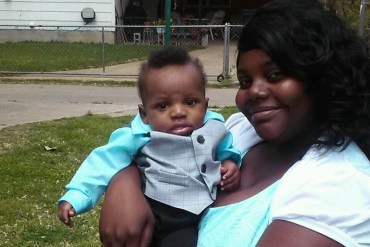 At a prenatal doctor visit she learned about a group that offers help for first-time mothers-to-be called the Nurse-Family Partnership. A registered nurse named Ashley Bradley began to visit Dawson at home every week to talk with her about her hopes and fears about pregnancy and parenthood.

Bradley helped Dawson sign up for the Women, Infants and Children Program, which provides nutritional assistance to low-income pregnant women and children. They talked about what to expect every month during pregnancy and watched videos about giving birth. After her son, Andrew, was born in December 2013, Bradley helped Dawson figure out how to manage her time so she wouldn’t fall behind IN at school.

Dawson graduated with a bachelor’s degree in early May. She’s looking forward to spending time with Andrew and looking for a paralegal job. She and Andrew’s father recently became engaged.

“Ashley’s always been such a great help,” Dawson says. “Whenever I have a question like what he should be doing at this age, she has the answers.”

Home visiting programs that help low-income, first-time mothers have a healthy pregnancy and develop parenting and other skills to get and stay self-sufficient have been around for decades. Lately, however, they’re attracting new fans. Home visiting programs appeal to people of all political stripes because the good ones manage to help families improve their lives and reduce government spending at the same time.

In 2010, the health law created the Maternal, Infant and Early Childhood Home Visiting (MIECHV) program and provided $1.5 billion in funding for evidence-based home visiting programs. There are now 17 home visiting models approved by the Department of Health and Human Services, and Congress reauthorized the program in April with $800 million in funds for the next two years.

The Nurse-Family Partnership is one of the largest and best-studied programs. Decades of research into how families fare after participating in it have documented reductions in the use of social programs such as Medicaid and food stamps, reductions in child abuse and neglect, better pregnancy outcomes for mothers and better language development and academic performance by their children, among other things.

But some experts, while supporting the MIECHV program overall, say that only a handful of the approved models have as strong a track record as that of the Nurse-Family Partnership. They say the standards for what constitutes an evidence-based program are too lenient.

“If the evidence requirement stays as it is, almost any program will be able to qualify,” says Jon Baron, vice president for of evidence-based policy at the Laura and John Arnold Foundation, which supports initiatives that encourage policymakers to make decisions based on data and other reliable evidence. “It threatens to derail the program.”

A study by the Pacific Institute for Research and Evaluation found that the Nurse-Family Partnership reduced Medicaid spending on a first child by 8 percent, resulting in a savings to Medicaid of $12,308 per family served. When adding in cost reductions in food stamps, special education, Child Protective Services and criminal justice costs, total government savings are closer to $19,000 per family, the study found.

However, many of the models approved by HHS do not have a lengthy track record nor strong evidence of having made meaningful changes in mothers’ or their children’s lives, according to Baron.

Although MIECHV programs must show statistically significant effects in order to qualify as evidence-based, those effects need not have any policy or practical importance to qualify, Baron says.

He offered the example of one program that increased the percentage of mothers who brought their babies to the doctor for a one-month checkup, a process measure. But a few years later, further evaluation found no statistically significant effect on child health or safety, no measurable improvement in concrete outcomes.

“We think this is an important program,” Baron says. “I testified for its reauthorization. We just think that as it goes forward the loophole needs to be adjusted.”

Cost and Quality Insuring Your Health