CHICAGO — Ben Barnes has slept in abandoned buildings, hallways and alleys. For the past year or so, he’s been staying at the city’s largest homeless shelter, Pacific Garden Mission, in the shadows of the famous skyline.

“I’ve always considered myself homeless because I don’t have a home,” he said on a recent crisp, fall day in the shelter’s sun-splashed courtyard. But he’s fortunate, said Barnes, 44. He’s never had to sleep outside when it was below zero or snowy. He always found a friend’s place, building or shelter to crash in. He knows others aren’t so lucky.

As winter approaches, hundreds — perhaps thousands — of people in this city of nearly 3 million are living on the streets: some in encampments, others hopping from corner to corner. And the numbers could grow without more federal aid and protections amid economic pressures from the pandemic. 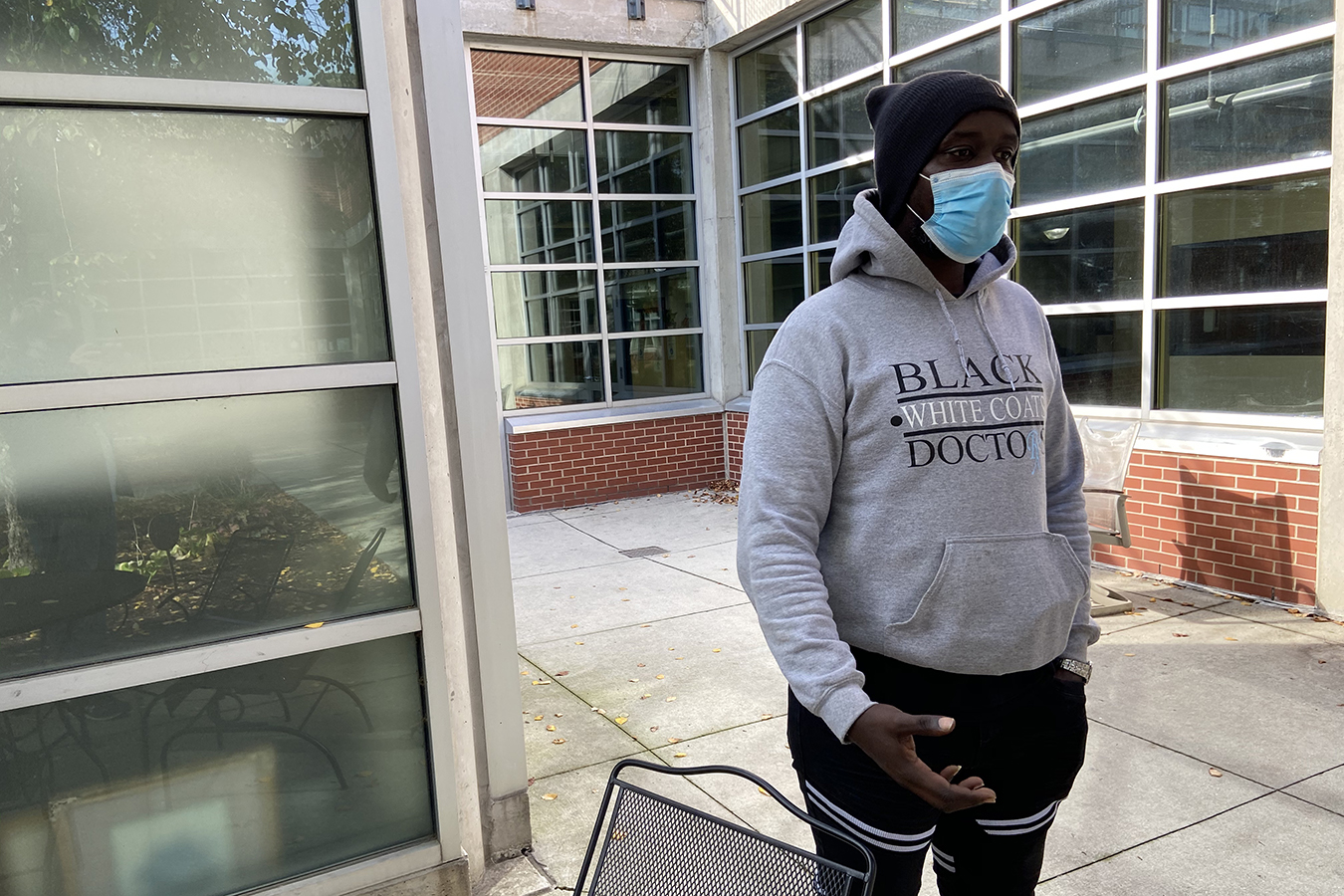 Ben Barnes has been living at the Pacific Garden Mission shelter on Chicago’s Near West Side since late last year. Barnes, pictured on Oct. 21, says he considers himself fortunate he’s never had to sleep on the streets when it’s really cold or snowy.(Giles Bruce for KHN)

This year, the coronavirus has forced homeless shelters to limit the number of beds they can offer. Pacific Garden Mission, for instance, is operating at roughly half its normal capacity of 740. And COVID-19 cases are rising as temperatures drop.

“What happens if we’re in the midst of a pandemic and a polar vortex happens?” said Doug Schenkelberg, executive director of the Chicago Coalition for the Homeless. “We’re trying to keep the contagion from spreading and keep people from dealing with hypothermia. Is there the infrastructure in place that can handle that type of dual crisis?”

Cold-weather cities across the nation are seeking creative ways to cautiously shelter homeless people this winter. Exposure to the elements kills individuals staying outside every year, so indoor refuges can be lifesaving. But fewer options exist nowadays, as coronavirus concerns limit access to libraries, public recreation facilities and restaurants. And in official shelters, safety precautions — spacing out beds and chairs, emphasizing masks and hand-washing, testing — are critical.

“The homeless check off most boxes in terms of being the most susceptible and most vulnerable to the COVID-19 pandemic, and most likely to spread and most likely to die from it,” said Neli Vazquez Rowland, founder of A Safe Haven Foundation, a Chicago nonprofit that has been operating a “medical respite” isolation facility for homeless individuals with the coronavirus.

Demand for shelter could grow. Stimulus checks helped stave off some of the pandemic’s initial economic pain, but Congress has stalled on additional relief packages. And though the Trump administration has ordered a moratorium on evictions for tenants who meet certain conditions through the end of the year, a group of landlords is suing to stop the ban. Some states have their own prohibitions on evictions, but only Illinois, Minnesota and Kansas do in the Midwest.

At the Guest House of Milwaukee, a publicly funded homeless shelter in Wisconsin, the pandemic complicates an already challenging situation.

“We’re like many communities. We never really have completely enough space for everybody who is in need of shelter,” said Cindy Krahenbuhl, its executive director. “The fact that we’ve had to reduce capacity, and all shelters have, has created even more of a burden on the system.”

She said outreach teams plan to connect individuals living outside with an open bed — whether at a shelter, a hotel or an emergency facility for homeless people at risk for COVID — and get them started with case management.

“The reality is we’ve got to make it happen. We’ve got to have space for folks because it’s a matter of life and death. You cannot be outside unsheltered in this environment too long,” said Rob Swiers, executive director of the New Life Center in Fargo, North Dakota, where the average high in January is 18 degrees.

His shelter, Fargo’s largest, plans to use an insulated, heated warehouse to provide roomy sanctuary for clients.

In Minnesota’s Ramsey County, home to St. Paul, an estimated 311 people are living on the streets, compared with “dozens” at this time in 2019, according to Max Holdhusen, the county’s interim manager of housing stability. The area just had a record snowfall for so early in the year.

The county has been using hotel rooms to make up for the reduction in shelter beds, and recently agreed to lease an old hospital to shelter an additional 100 homeless people. 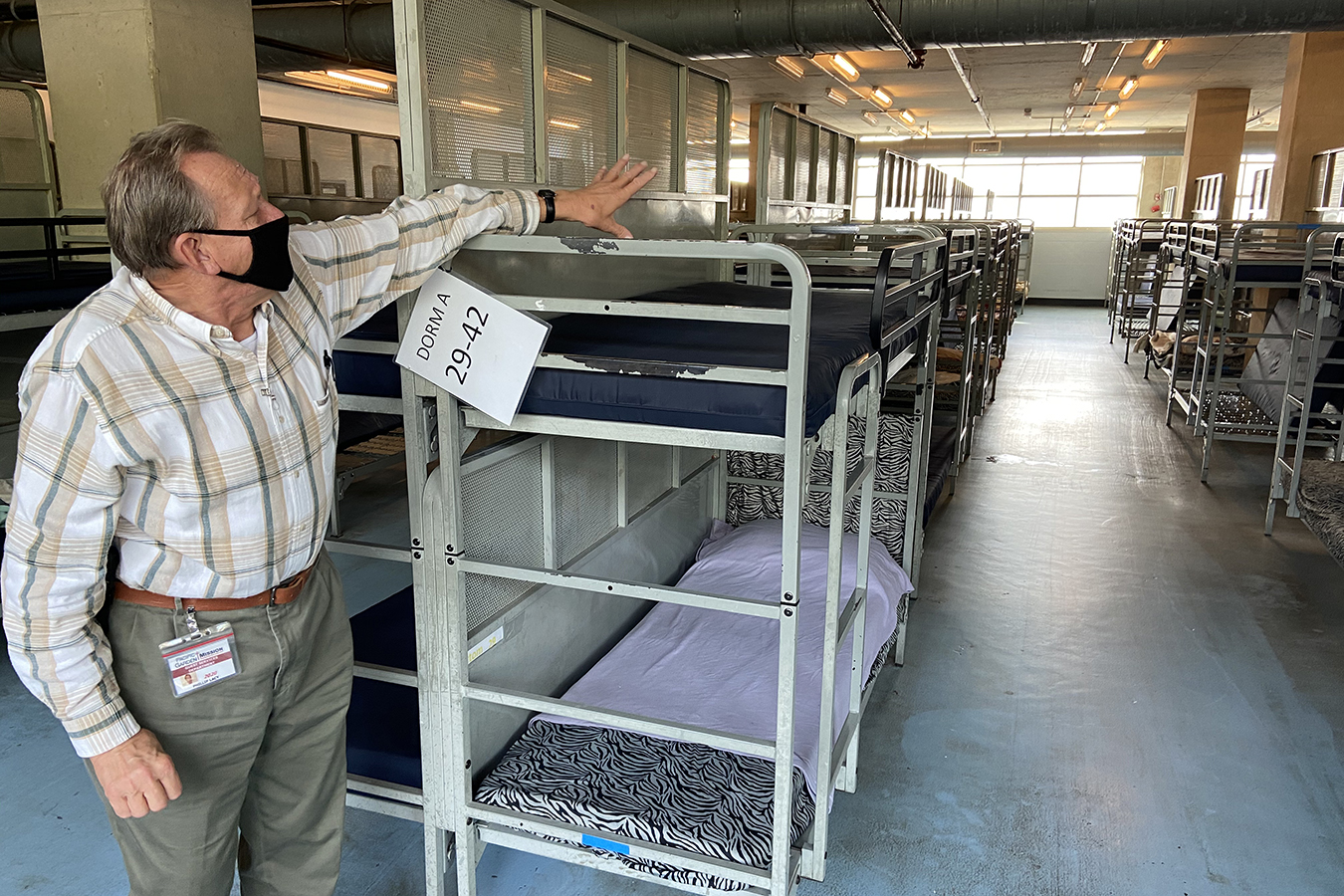 Evangelist Phil Lacy gives a tour of Chicago’s Pacific Garden Mission on Oct. 21. The homeless shelter, the city’s largest, has had to limit its capacity because of the pandemic.(Giles Bruce for KHN)

The city of Chicago has set up emergency shelters in two unused public school buildings to replace beds lost to social distancing. As it does every winter, the city will also operate warming centers across Chicago, although this year with precautions such as spacing and masking.

In September, the city directed more than $35 million in funding — mostly from the federal CARES Act for coronavirus relief — to an “expedited housing” program aiming to get more than 2,500 people housed in the next few years. The initiative plans to financially incentivize landlords to take risks on renters they might normally avoid, such as those with criminal histories or poor credit. The nonprofit in charge, All Chicago, is also hosting “accelerated moving events,” in which its staffers descend on a shelter, encampment or drop-in center and work to house everyone in that facility.

Even though Black people make up only a third of Chicago’s population, they account for roughly three-fourths of those who are homeless, according to the city’s count.

“We know that people who are African American have a higher prevalence of hypertension, of diabetes, of obesity, of smoking, of lung issues,” he said. “So they are hit harder with those predisposing conditions that make it more likely that if you get coronavirus, you’re going to have a serious case of it.”

Then add the cold. Dr. Stockton Mayer, an infectious disease specialist from the University of Illinois Hospital in Chicago, said hypothermia doesn’t increase the chances of contracting the virus but could aggravate symptoms.

As of Sept. 30, according to All Chicago, 778 people were unsheltered in the city. However, that number includes only people who are enrolled in homelessness services, and other estimates are even higher. 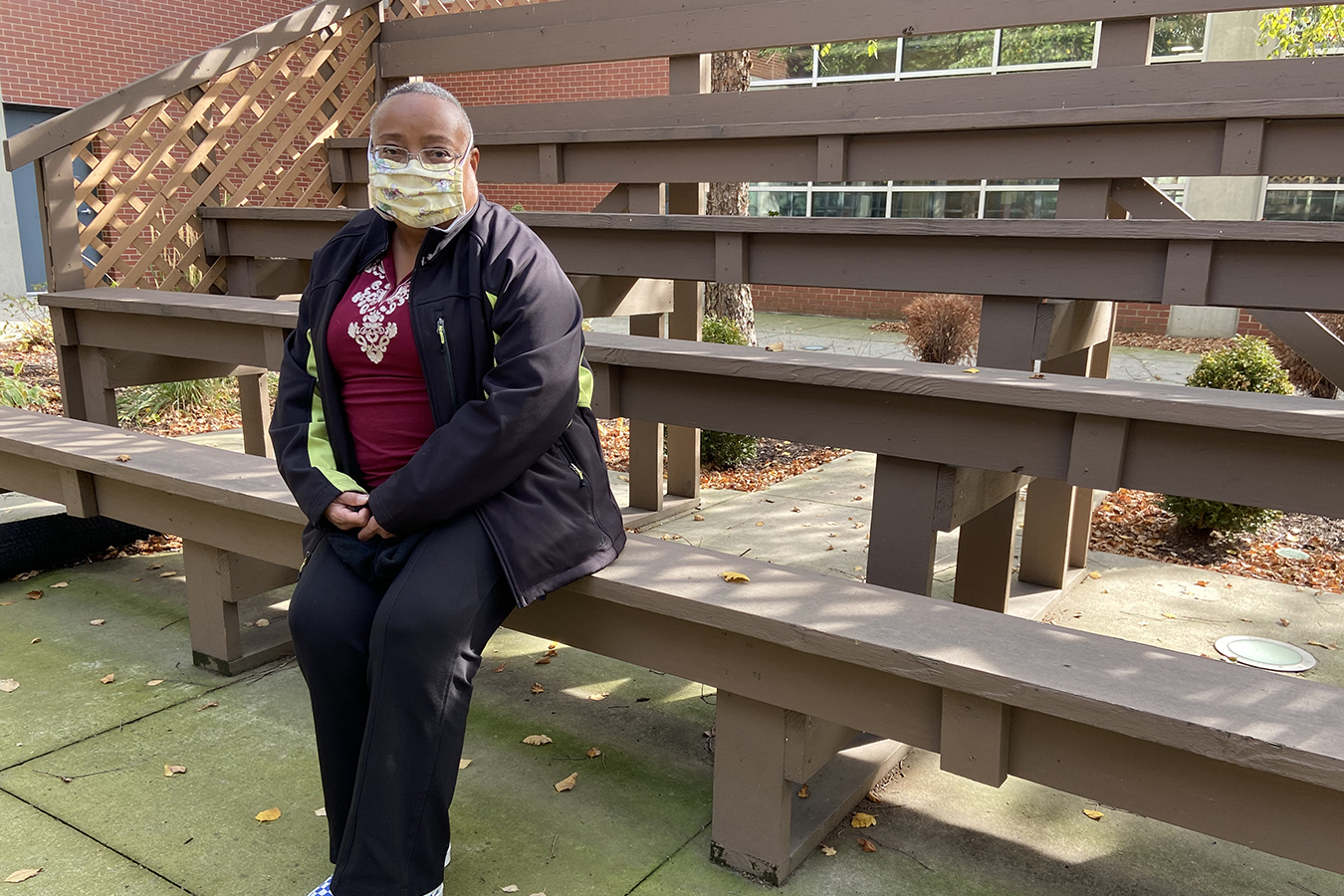 Constance Foster resides at the Pacific Garden Mission homeless shelter in Chicago. Foster, pictured on Oct. 21, says she worries that the economic impact of COVID-19 could put more people on the streets this winter. “This is going to be a very rough Christmas,” she says.(Giles Bruce for KHN)

Some homeless people who plan to live outside this winter said they worry about staying warm, dry and healthy in the age of COVID-19. Efren Parderes, 48, has been on the streets of Chicago since he lost his restaurant job and rented room early in the pandemic. But he doesn’t want to go to a shelter. He’s concerned about catching the coronavirus and bedbugs, and doesn’t want to have to obey curfews.

He recently asked other unsheltered people what they do to keep warm during the winter. Their advice: Locate a spot that blocks the wind or snow, bundle up with many layers of clothing, sleep in a sleeping bag and use hand warmers.

“This is going to be the first time I’ll be out when it’s really cold,” he said after spending a largely sleepless night in the chilly October rain.

Homeless Shelters Grapple With COVID Safety as Cold Creeps In