Dr. Sudeep Taksali, an orthopedic surgeon, became worried that his 8-year-old daughter had already grown taller than his 12-year-old son. And sometimes she had an attitude more befitting a teenager. Something seemed wrong.

Taksali and his wife, Sara, realized their daughter had grown 7 inches in two years and was showing signs of puberty. They took her to the doctor, who referred her to a pediatric endocrinologist for a work-up.

Eventually, their daughter was diagnosed with central precocious puberty. It’s a rare condition that meant she would go through sexual development years earlier than her peers and would likely stop growing prematurely, too.

Adopted two years ago from India, she’s a bright, avid reader who loves to do kettlebell workouts with her dad and Zumba with her mom. Still, moving across the world and learning a new language is no easy feat.

“Having one more thing for her to deal with … where there might be maybe some negative attention drawn to her changing body,” Taksali said. “That was one of my big concerns.”

On the advice of their daughter’s doctors, the Taksalis decided to put her early puberty on hold. The recommended treatment is a product commonly known as a hormone blocker. Implanted beneath the skin in her arm, it releases a small dose of a drug each day that increases the body’s production of some hormones while decreasing others. The result is the child’s progression toward adulthood slows. 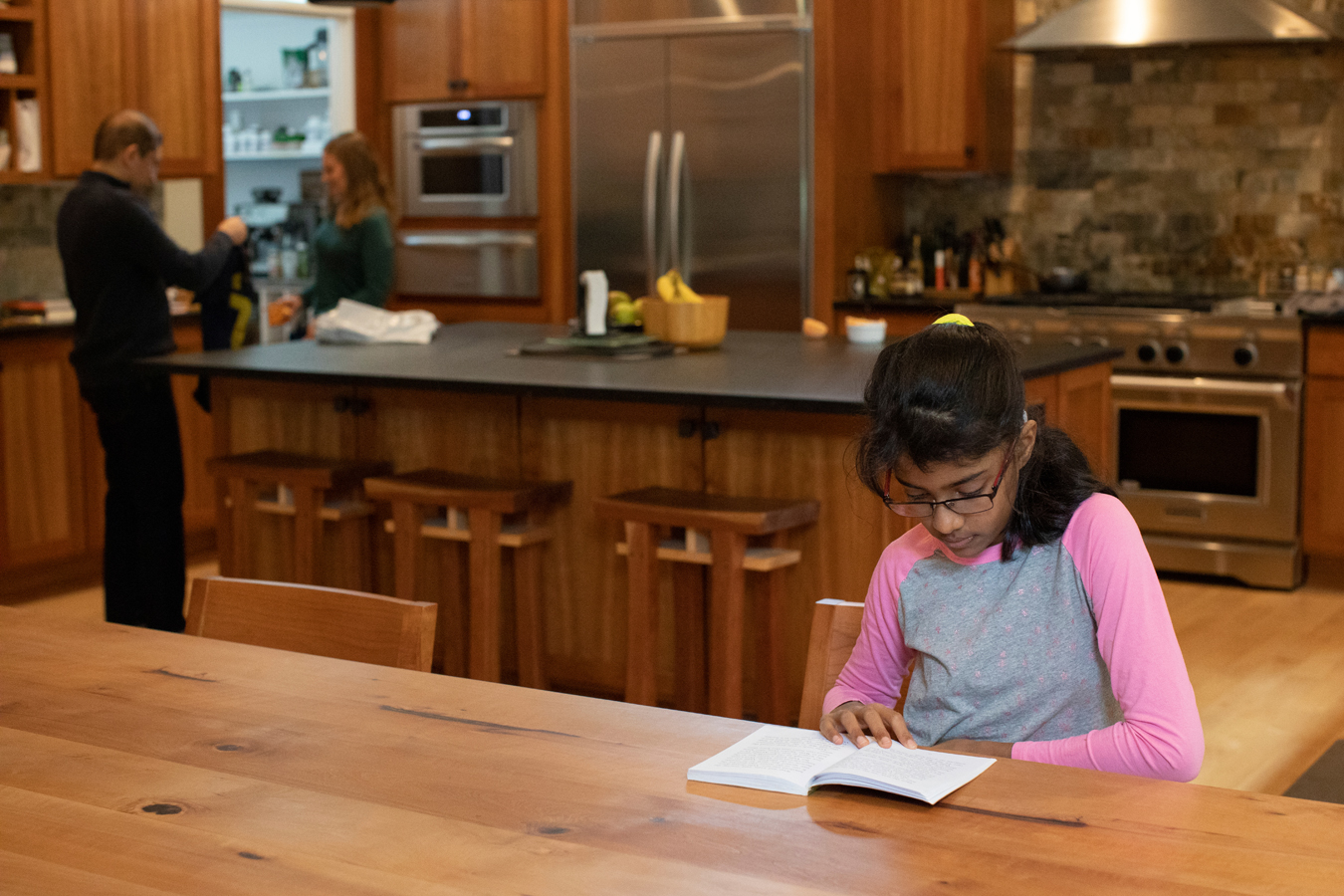 Taksali’s 8-year-old daughter recently underwent treatment for central precocious puberty, or early puberty. Her father, an orthopedist, worked with her doctor and their health insurance provider to get the less expensive of two nearly identical drugs with vastly different price tags.(Kristina Barker for KHN)

The doctors told them there were two nearly identical drug implants — each containing 50 milligrams of histrelin acetate — made by the same company, Endo Pharmaceuticals, an American drugmaker domiciled in Ireland. But one was considerably cheaper.

Then the estimated bill came.

The Patient: Sudeep Taksali’s daughter, 8. She is insured through her father’s high-deductible UnitedHealthcare plan.

Total Estimated Bill: The hospital told Taksali the insurer wouldn’t cover the cheaper version of the drug, Vantas. After that, he spent hours trying to get an estimated bill ahead of the scheduled implantation. Supprelin LA would cost around $95,000 plus the cost of implantation, the hospital’s billing department told him. Under his health plan, he has a $5,000 deductible and 20% coinsurance obligation, so he was worried how much he might owe.

The main difference between the two medicines is that Supprelin LA releases 65 micrograms of the drug a day, and Vantas releases 50 micrograms a day. Each implant lasts about a year.

The 15-microgram difference in daily dose with Vantas is less than the weight of an eyelash, and the doctors who recommended the treatment said it has the same effectiveness for children with central precocious puberty.

The much higher price for the children’s version of the drug grated on Taksali. “From a parent standpoint, as a physician, as a consumer, it feels abusive,” he said. “There’s sort of a predation on parents who have that sense of vulnerability, who will do anything within their means to help their children.” 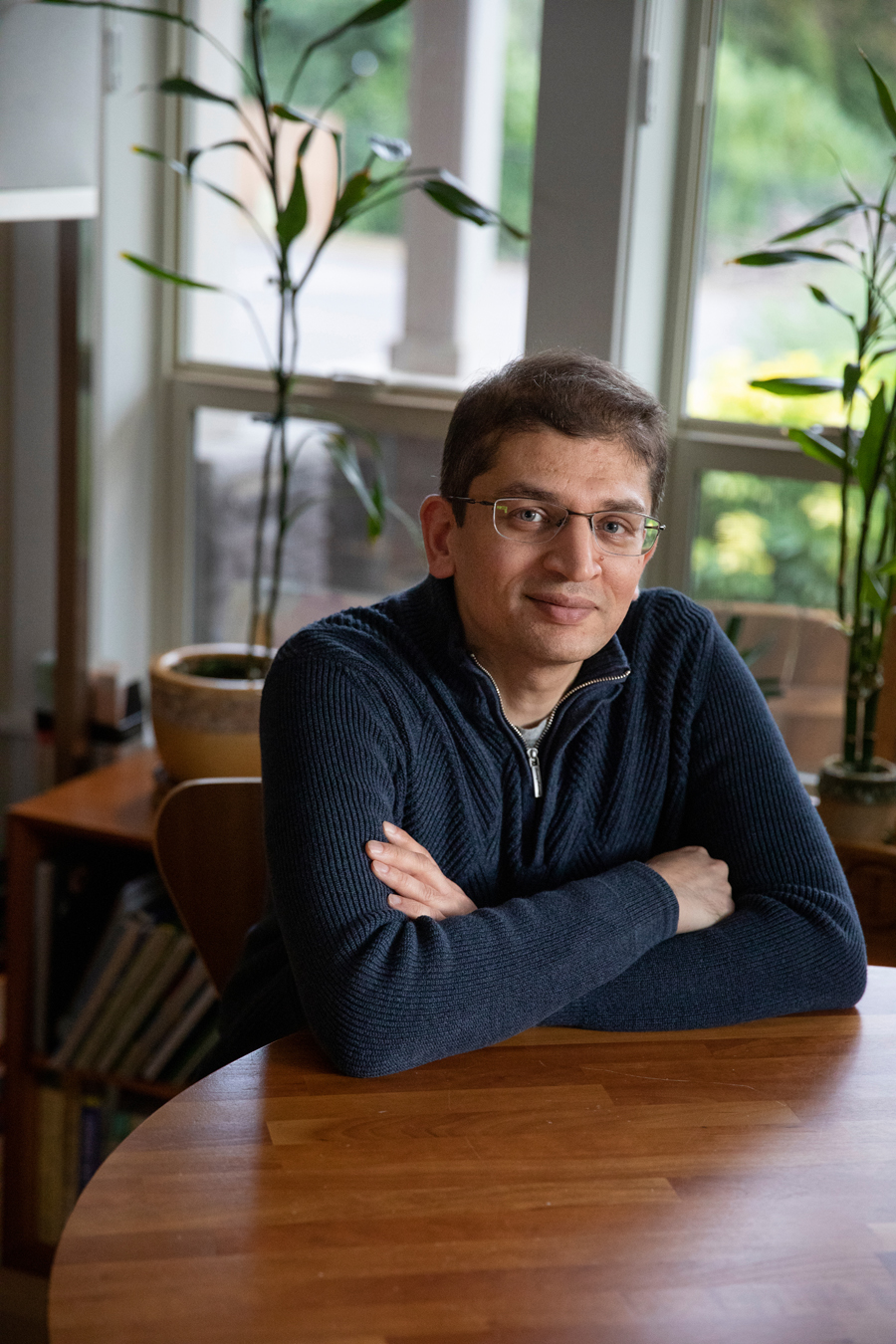 Drugmakers can use the same chemical compound to create different branded drugs with different disease targets ― and apply for FDA approval for each. FDA spokesperson Brittney Manchester said by email, “Generally, it is the sponsor’s decision.” Endo makes both Supprelin LA and Vantas.

When we asked Endo Pharmaceuticals why Supprelin LA and Vantas had such different price tags, the company said the implants aren’t identical and treat very different conditions. It didn’t respond to questions about why that meant the prices should be different and whether it was somehow more expensive to manufacture one versus the other.

Resolution: Taksali spent more than a month trying to make sure his daughter could use the cheaper drug and, finally, the week his daughter was scheduled to have the procedure, it was approved. The hospital submitted the request again and UnitedHealthcare said it would cover it.

“Our coverage policies are aligned with FDA regulations and Vantas is not FDA approved to treat central precocious puberty,” UnitedHealthcare spokesperson Tracey Lempner said in an email. “In this specific case, when the provider expressed concern over the cost of Supprelin LA, we worked with them to allow for coverage of Vantas.”

Taksali’s daughter got the Vantas implant in late January. 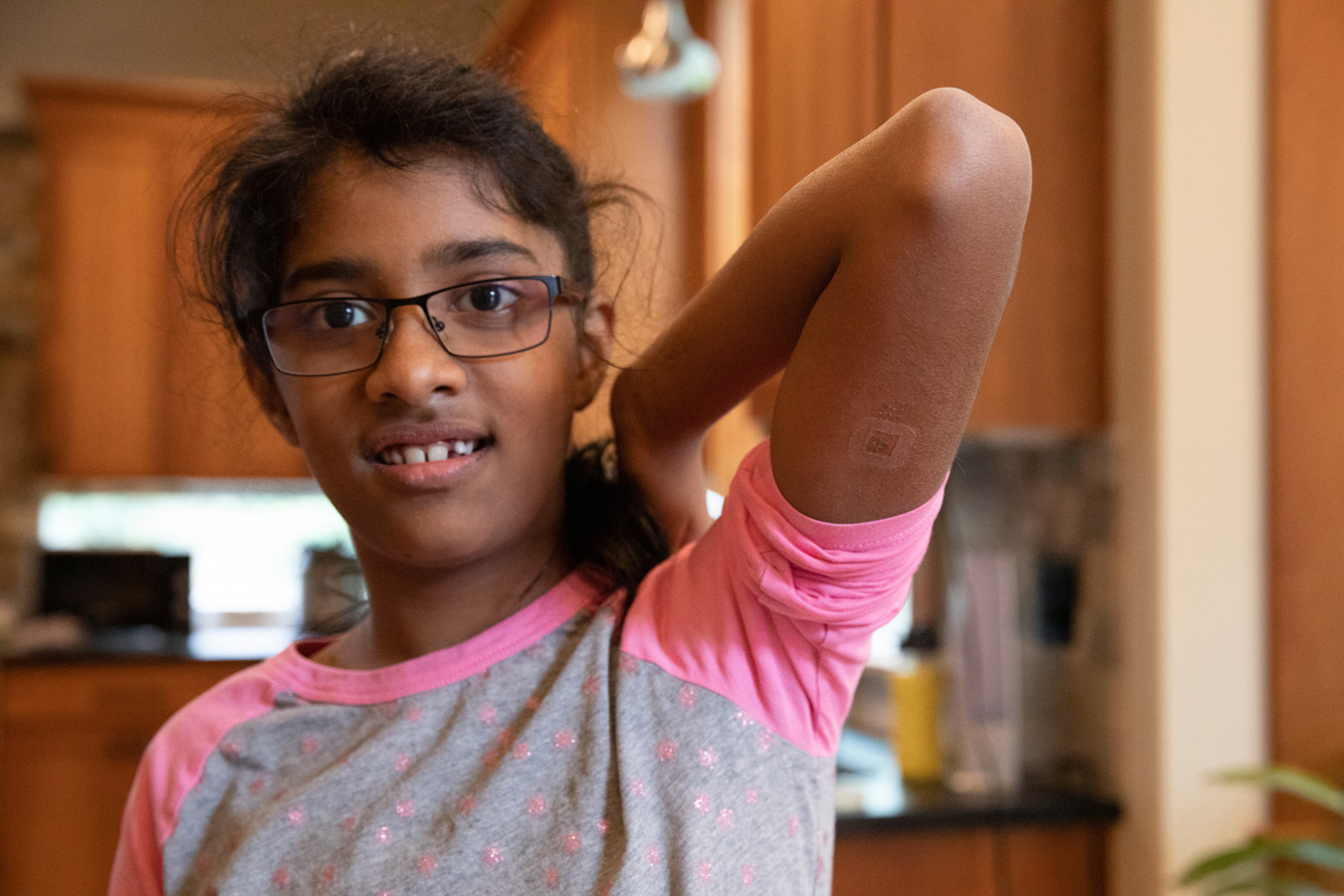 The hormone-blocking implant was placed on the young patient’s arm to treat central precocious puberty, or early puberty.(Kristina Barker for KHN)

When he got a breakdown of charges afterward, it listed $608 for the implantation and $12,598.47 for Vantas — about three times its list price. (Hospitals add markups to the list prices.) Still, that’s far less than the $95,000 the Supprelin LA bill would have been.

According to his explanation of benefits, after insurance, Taksali will owe $4,698.45 ― most of his high deductible. Because it is early in the year, the family had not yet spent any of its 2020 deductible.

Taksali said he fought for the lower cost drug on principle.

“Even if it is the insurance company’s money, it’s still somebody’s money,” he said. “We are still contributing to those premium dollars.” 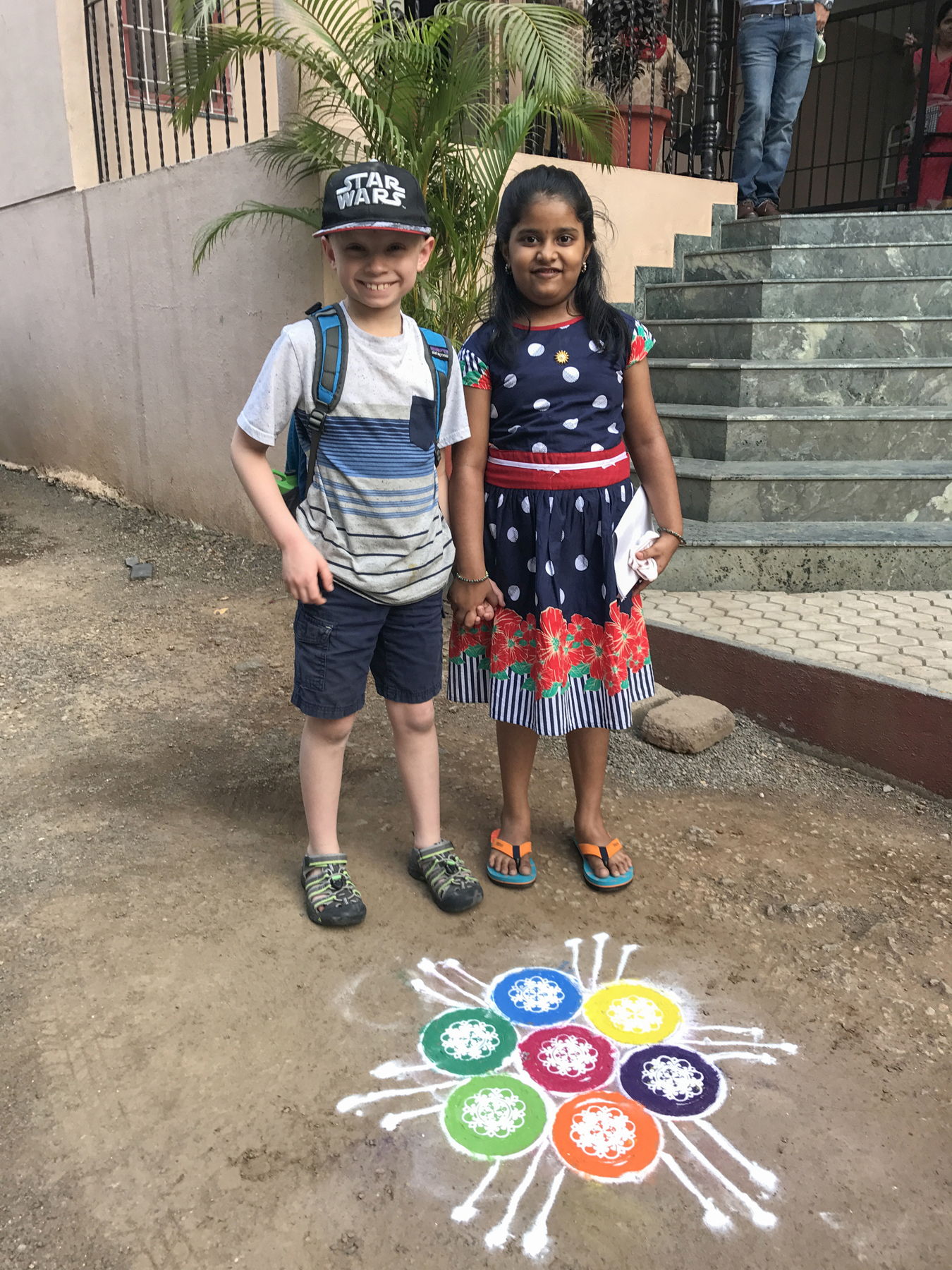 On the day the Taksali family adopted their daughter from India, she and her brother were about the same height. Now she is about 5 inches taller than him despite being more than three years younger.(Courtesy of Sudeep Taksali)

The Takeaway: If you need an expensive drug, the first thing you should do is ask your doctor if there are cheaper alternatives. Often different formulations of the same chemical compound carry vastly different prices. In this family’s case, the version to treat prostate cancer patients was far cheaper than the pediatric version for a hormone imbalance.

More commonly, the different formulations relate to different dosages ― two 250 mg tablets may be cheaper than a 500 mg pill. Likewise, a pill you have to take three times a day may be far less expensive than the once-a-day extended-release version.

When a coverage denial leads to costly care, patients can ally with their health care providers or employers to appeal, though it can be time-consuming. Self-insured employers, in particular, won’t want to waste health care dollars either. For Taksali, using social media to direct-message UnitedHealthcare garnered prompt responses and some answers.

If there aren’t other options, drug manufacturers often offer coupons to help patients with their copays. You can find some using GoodRx or by visiting the drugmaker’s website directly.