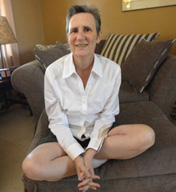 After an excruciating bout of chemotherapy, Linda Meisenhelder gave up fighting colon cancer and last fall entered end-of-life hospice care. She was willing to quit curative treatments – a requirement for Medicare to pay for hospice – but says no one else in her cancer support group seemed ready to take that step.

“They were all very clear in saying that they would do chemo again in a heartbeat,” says Meisenhelder, who lives in Harleysville, Pa. “Hospice has a lot to offer but it can be scary when they hear what they have to give up.”

This dilemma – that you must give up aggressive treatment to get end-of-life counseling and care – is a major reason many people resist entering hospice, sometimes until just days before they die.

But the new health law could lead to a major change in Medicare policy that allows patients to get treatment and hospice care simultaneously.

Experts say this dual approach, known as “concurrent care,” may be especially useful for people using dialysis to extend their lives, and those waiting for organ transplants that may not come in time. More broadly, advocates say, the change may encourage people with any kind of terminal illness to take advantage of hospice care earlier.

For Dying and Seriously Ill Children, Hope For Better Care (8/13/09)

“Having personally had to explain what’s good about hospice to families that think I’m about to shove them onto an iceberg, I know it’s a very difficult decision,” says Diane Meier, director of the Center to Advance Palliative Care at the Mount Sinai School of Medicine in New York City.

It will be easier to get the terminally ill to accept hospice care, she says, “if you can say to families, you don’t have to make this terrible choice here – it’s more, not less.”

The new law instructs Medicaid, the state-federal program for the poor, to cover simultaneous hospice and curative care for children with terminal illnesses immediately. And it directs the federal Medicare program, which covers seniors and disabled people, to launch up to 15 pilot projects around the country to test the concept. If the experiment is deemed successful and doesn’t increase costs, then Medicare could make the benefit available to everyone in hospice.

Someone with heart disease, for example, could get cardiac drugs that improve blood circulation and at the same time receive hospice’s palliative services. Those include a team of doctors and nurses devoted to easing physical pain and symptoms, and social workers and clergy who help patients and their families accept death. Hospice staff typically come to a dying person’s house or nursing home a few times a week.

Some fear doing both curative and palliative care will muddle efforts to get patients to embrace the hospice philosophy emphasizing quality of life. “It could be great,” says Terry Berthelot, an attorney with the Center for Medicare Advocacy, a Connecticut-based patients’ rights group.

But it also “may make dying more difficult, because some people may be chasing after cures instead of what hospice is about, to say ‘thank you,’ to say ‘I forgive you’ – that emotional work.”

More than one million Medicare beneficiaries – both those over 65 and those like Meisenhelder, who is 55 and on disability – used the hospice benefit in 2008, at a cost of $11.2 billion, according to the Medicare Payment Advisory Commission. It’s one of the fastest-growing components of Medicare.

Medicare makes hospice available to anyone with a prognosis of six months or less to live; in 2008 the average length of stay was 83 days. While a patient can drop out of hospice at any time and resume treatment through Medicare’s traditional benefits, many people still see accepting hospice as an irrevocable decision. 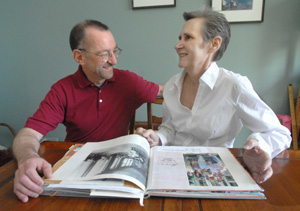 Linda Meisenhelder and husband David look at a memory book they’ve been compiling. She is receiving hospice care, which Medicare now pays for only when one ends curative treatment. (April Saul/Philadelphia Inquirer)

Some advocates believe offering both modes of care can save Medicare money. If hospice providers are helping patients manage their pain and symptoms, that may reduce costly visits to emergency rooms and hospitals. Two commercial insurers, Aetna and UnitedHealthcare, already allow their hospice patients who are insured through private plans to pursue curative treatments. Randall Krakauer, who oversees Aetna’s Medicare and concurrent-care programs, says the change did not increase the program’s costs.

“If you let people take hospice and curative care concurrently, they will come to their own decisions on their own,” he says. “The decisions will usually be consistent with the hospice philosophy or approach.”

But Gail Inderwies, president of Keystone Hospice in Wyndmoor, which is caring for Meisenhelder at her home, says it’s “politically naive” to think Medicare will save money, since many doctors and hospitals lack the training and motivation to help smooth the transition to hospice.

“If you’re being paid to give aggressive treatment, there’s still that incentive to continue to treat,” Inderwies says. “This will avoid the dialogue more, because we still haven’t trained medical people to talk about death and dying.”

A change in policy also may challenge hospice providers as they will need to learn how to manage the side effects of the curative treatments, says Joseph Straton, chief medical officer for Penn Wissahickon Hospice, part of the University of Pennsylvania Health System.

Still, the change is likely to be popular with patients. Jay Chestnut, a dancer with AIDS, went to Keystone Hospice in 2004 expecting to die. But after 14 months, the hospice put him on a new drug cocktail that arrested his decline. (Inderwies says Keystone is different from many hospices in that it sometimes provides curative treatments beyond those offered by other facilities.)

Five years later, Chestnut, 70, is living in Philadelphia. He thinks most of those in hospice have hopes of getting better and should have a chance at a cure no matter how dire the prognosis. “You never know what happens,” Chestnut says.