For trauma workers like Jonathan Bartels, a nurse who has worked in emergency care and palliative care, witnessing death over and over again takes a toll. Over time, they can become numb or burned out.

But about two years ago, after Bartels and his team at the University of Virginia Medical Center in Charlottesville tried and failed to resuscitate a patient, something happened. 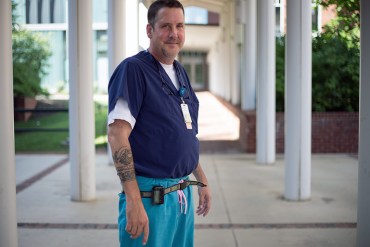 Nurse Jonathan Bartels says “The Pause” after a death of a patient helps doctors and nurses cope with the loss. (Photo by Kara Lofton)

“We had worked on this patient for hours and the chaplain came in and kind of stopped everyone from leaving the room, and I’m like, ‘Wow, that’s really bold,’ ” he said. “She said, ‘I’m just going to pray over this patient and then you all can leave.’ And I watched it and I felt ­– it was the act of stopping people — really inspired me.”

While the prayer wasn’t totally comfortable to him because Bartels, like many at the hospital, is from a different religious tradition, the pause felt right.

“So the next time we worked on another person who didn’t make it, I decided to be bold and stop people from leaving,” he said. “I just said, ‘Can we stop just for a moment and recognize this person in the bed? You know this person before they came in here were alive, they were interacting with family, they were loved by others, they had a life.’ ”

The team did it – they stopped, just for a minute.

“When it was done, I said, ‘Thank you all and thank you all for the efforts that we did to try and save them.’ People walked out of the room and they thanked me and they thought it was really awesome,” he said.

The idea began to spread throughout the hospital, particularly to emergency department workers. The Pause, as it has become known, also is being taught as part of the curriculum at UVA nursing school. Emergency medical technician Jack Berner says it helps him handle the toughest cases. 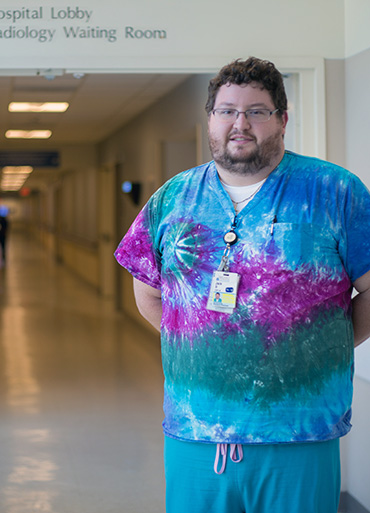 Jack Berner, an EMT, says pausing after a patient death helps him reflect — and move on to his next case. (Photo by Kara Lofton)

“It makes it so we can actually view the person as a person rather than as a patient that we see on an everyday basis,” he said. “You can relate more to the case [knowing] it’s somebody’s father or their mother, their sister or their uncle, rather than somebody you just see for five minutes.”

Bartels hopes The Pause will help medical workers like Berner accept the loss without disconnecting emotionally.

“So you are able to feel and you are also able to sense and give back,” he said, even if it’s not a relative, a worker can have a sense of being a part of a loss. “I can also acknowledge the pain that I bore witness to in caring for that family and caring for that patient,” he explained.

The concept is spreading beyond UVA. After the dean of UVA’s school of nursing talked about the practice in a speech at a national conference, a nurse from Providence Sacred Heart Medical Center brought it across the country to Spokane, Wash.

This story is part of a reporting partnership with NPR, local member stations and Kaiser Health News.

Hospital Workers Find Solace In Pausing After A Death