Two major safety shortcomings in America’s hospitals—the frequency with which patients get hurt during their stays and the large number who are readmitted—have decreased as government penalties and other programs targeting them kick in. 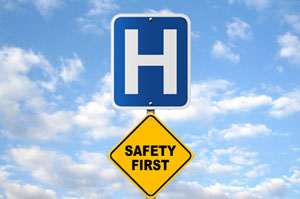 The Obama administration credited the new quality initiatives created by the federal health law. But some of the improvements in patient safety preceded that law. Even with the improvements, one out of eight patients is injured during their time in the hospital.

The portion of Medicare patients who were re-hospitalized within 30 days of discharge decreased to 17.5 percent in 2013, down a full percentage point from 2012, according to a report released Wednesday by the Centers for Medicare & Medicaid Services, or CMS. That is the second year that readmission rates decreased noticeably after a long period of stagnation. CMS said the decline translated to 150,000 fewer readmissions over the last two years, an 8 percent reduction.

Those decreases coincide with the onset of Medicare penalties against hospitals with higher-than-expected rates of patient returns. More than 2,000 hospitals have been fined each of the last two years under the program created by the health law. A number of hospitals have devised new ways to monitor their patients after they leave, including scheduling regular check-ups and giving impoverished patients’ free medication.

CMS said incidents of patient harm in the hospital also decreased, by 9 percent, from 145 complications per 1,000 hospital discharges in 2010 to 132 complications per 1,000 discharges in 2012. The incidents included infections, trauma during vaginal births, reactions to medicines, falls and bedsores. A total of 28 measures were used in the estimates by the federal Agency for Healthcare Research and Quality.

Maulik Joshi, the American Hospital Association’s executive in charge of research, said in a statement that “these results are encouraging and reflect the hard work of our nation’s hospitals to accelerate quality improvements that continually improve patient safety.”

Some of the types of incidents, such as bloodstream infections in patients with catheters, began decreasing before the health law took effect. Dr. Kevin Kavanagh, chairman of the consumer advocate group Health Watch USA, said that while good, the reduction in patient safety problems “is a small change” relative to the frequency that patients are still being hurt.

The Obama administration credited the reductions to 27 hospital collaborations set up by the government to share ways to improve patient safety, lower readmissions and track progress.  In addition, the health care law created a penalty for hospital errors that goes into effect in October, when CMS also plans to add infections to its existing quality bonus and penalty program.

Dr. Atul Grover, chief public policy officer at the Association of American Medical Colleges, said that while the health law’s financial incentives likely were a factor, much of the decrease “is related to many quality scorecards having some of the same measures.” Those scorecards include ones hospitals use internally as well as hospital ratings published by groups such as The Leapfrog Group, Consumer Reports, U.S. News & World Report, Healthgrades and Truven Health Analytics.

Leah Binder, president of The Leapfrog Group, said the improvements mirrored those tracked by her group’s surveys. But she faulted the government for not reporting rates for individual hospitals to help consumers.

“With due respect to the hard work of our CMS colleagues, their report sounds exciting, but it’s not helpful to families that want to protect themselves from getting killed by a hospital error—and that’s simply unacceptable,” she said in an email.