Next time you go to an emergency room, be prepared for this: If your problem isn’t urgent, you may have to pay upfront. 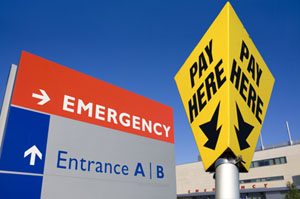 Last year, about 80,000 emergency-room patients at hospitals owned by HCA, the nation’s largest for-profit hospital chain, left without treatment after being told they would have to first pay $150 because they did not have a true emergency.

Led by the Nashville-based HCA, a growing number of hospitals have implemented the pay-first policy in an effort to divert patients with routine illnesses from the ER after they undergo a federally required screening. At least half of all hospitals nationwide now charge upfront ER fees, said Rick Gundling, vice president of the Healthcare Financial Management Association, which represents health-care finance executives.

“It has been a successful part of helping to reduce crowding in emergency rooms and to encourage appropriate use of scarce resources,” HCA spokesman Ed Fishbough said.

But emergency-room doctors and patient advocates blast the policy as potentially harmful to patients, and they say those with mild illnesses such as sore throats and ear infections do little to clog ERs and do not require CT scans or other pricey technologies.

Kim Bailey, research director for the consumer group Families USA, said the tactic lets hospitals turn away uninsured patients who often fail to pay their bills and are a drag on profits. While the uninsured pay upfront fees as high as $350, depending on the hospital, those with insurance pay their normal co-payment and deductible upfront.

“This is certainly a concern to us,” Bailey said.

Physicians worry that sick people will forgo treatment. There is no data on how many who leave the ER without treatment follow up with visits to doctors’ offices or clinics.

“This is a real problem,” said Dr. David Seaberg, president of the American College of Emergency Physicians, who estimated that 2 to 7 percent of patients screened in ERs and found not to have serious problems are admitted to hospitals within 24 hours.

“After you’ve done the medical screening, it makes little sense to not go ahead and write a patient a prescription,” said Dr. Michael Zappa, a Boca Raton, Fla., hospital consultant and former president of the Florida College of Emergency Physicians.

Patient advocates say the strategy could discourage patients from going to the ER for true emergencies.

“It seems the point of the policy is to put a financial barrier between the patient and care,” said Anthony Wright, executive director of Health Access California, a consumer advocacy group.

The U.S. Centers for Disease Control and Prevention says that about 8 percent of ER visits are for non-urgent problems that could be treated less expensively in a doctor’s office or clinic; others put the number of non-emergency visits much higher. A 2010 Health Affairs study found that 27 percent of those visiting ERs could be treated more cost-effectively at doctors’ offices or clinics.

Hospital officials say the upfront payments are a response to mounting bad debt caused by the surge in uninsured and underinsured patients and to reduced reimbursements by some private and government insurers for patients who use the ER for routine care.

In the past year, for instance, Iowa, Tennessee and Washington state reduced or eliminated Medicaid reimbursements for those visiting ERs for specified non-urgent conditions, such as sore throats or warts.

In an annual report filed last year with the Securities and Exchange Commission, HCA officials wrote that “we are taking proactive measures to reduce our provision for doubtful accounts by, among other things, screening all patients, including the uninsured, through our emergency screening protocol, to determine the appropriate care setting in light of their condition, while reducing the potential for bad debt.”

HCA says it complies with federal requirements to screen and stabilize anyone with an emergency. Of more than 6 million ER visits to HCA hospitals last year, 314,000, or about 5 percent, were determined not to be emergencies, Fishbough said. About 230,000 of those patients paid and remained in the emergency room for treatment. The other 80,000 or so left. The HCA payment policy excludes children 5 and younger, pregnant women and those 65 and older.

“This helps ensure that the sickest patients get treated quickly and those who do not have an emergency have access to more efficient, less costly care settings,” Fishbough said.

HCA officials declined to say which of its hospitals use the practice, but the company owns more than 160 hospitals in 20 states, including Virginia, California, Alaska, Georgia, Missouri, Kentucky, Idaho and South Carolina.

“These policies are beneficial because they help patients understand their financial responsibilities and make informed decisions about where to utilize services,” said Tomi Galin, a spokeswoman for Community Health Systems. “These practices help reduce costs for both the patient and the hospital.”

“We think this is appropriate, given that some people use the ER in a way it was not intended: as a source for routine care,” he said.

The upfront payments for non-urgent ER visits are also used by nonprofit hospitals.

In May, Halifax Health in Daytona Beach, Fla., began asking adult patients to pay their co-payment or $350 before treatment for a non-emergency in its ER, spokesman Byron Cogdell said. Like other hospitals, Halifax applies that fee to the patient’s bill.

Paying To Get Prescriptions

In December, Skaggs Regional Medical Center in Branson, Mo., began asking ER patients to pay $40 or their insurance co-payment before receiving a prescription.

“If they don’t pay . . . they won’t be given their prescription,” hospital spokeswoman Michelle Leroux said.

The strategy is designed to help the hospital deal with spiraling, unpaid ER bills. About a third of the 120 patients treated daily in the hospital’s ER are uninsured. The change was implemented after the ER reported $1.3 million in bad debt for August.

“This amount of bad debt is unsustainable for our operation,” Skaggs chief executive William Mahoney said.

Midland Memorial Hospital in Midland, Tex., implemented a $150 upfront ER fee in 2009 as part of a cost control effort. In 2008 the nonprofit hospital lost $14 million, partly because of millions of dollars in unpaid bills from ER patients.

Since the change, the 320-bed hospital has seen a 10 percent drop in people visiting the ER with non-emergencies and a big drop in bad debt, said Stephen Bowerman, Midland’s chief financial officer.

In conjunction with the new ER policy, Midland set up a 24-hour telephone nurse triage system so people in the community can call a nurse to help decide whether to go to the ER or a nearby clinic.

Bowerman said the policy is helping to change behavior. He estimated that about 75 percent of patients with non-emergencies left the facility instead of paying the upfront fee.

“More people now know our ER is not a walk-in clinic or a primary care office,” he said.