After New Hampshire’s legislature severely cut their Medicaid funding last summer, hospitals throughout the state began shedding jobs. Exeter Health Resources, which runs a 100-bed hospital near the coast, lopped off 110, almost 5 percent of its workforce, many of them nurses and other care givers. 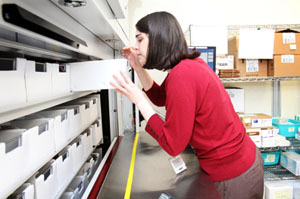 Allie Woods had several job offers before she’d even completed her pharmaceutical residency. She chose to move to Portland, Ore., to work at Oregon Health & Science University, customizing computer programs to help with drug issues. (Photo by Thomas Patterson)

It’s a paradox, too. Even as cutbacks in Medicaid and other programs gouge hospital budgets, and overall health care demand slackens as penny-pitching patients put off procedures in a bad economy, hospitals are creating new jobs: a net gain of 95,000 this year, 13,000 of them in September and 6,600 in October, according to the Bureau of Labor Statistics.

In fact, the health care sector is not only the nation’s top job generator, but it’s also one of the few major industries producing new jobs at all. Of the 80,000 net new U.S. jobs created in October, 12,000 of them were in health care —  hospitals, doctor’s offices, clinics, labs, home health care agencies and nursing homes all are creating net new jobs. Over the past 12 months, health care has created 20 percent of all new jobs.

What’s up? The new jobs appear to be driven not by patient demand as much as a general restructuring of the health care industry that includes changes mandated by the 2010 federal health care law, the 2009 federal stimulus funding, new government regulations and increasing use of information technology. Strong anecdotal evidence — hospital job listings, interviews with health care employers, analysis by health care economists — indicates the attention now is on hiring clerks and administrators.

Hospitals are also preparing to compete for tens of millions of now-uninsured patients the federal law will make eligible for health coverage beginning in 2014. So even as budgets are cut, the competition for patients will become more intense.

Exeter is seeking billing specialists, information technology experts and program managers at the same time it is cutting nurse positions. Job listings at hospitals around the U.S. show the same trend.

Those who study the link between jobs and health care overhaul aren’t surprised. “What we’re experiencing right now (around the country) is similar to what we experienced in Massachusetts,” says Douglas Staiger, an economist at Dartmouth University. He co-authored a recent study on job growth in the state between 2005 and 2010, in the wake of the health law signed by Mitt Romney when he was governor.

Health care jobs grew in Massachusetts 9.5 percent, cumulatively — almost twice as fast as in the U.S. as a whole. The growth was driven by administrative jobs. “Most of it was from enrolling patients who were previously uninsured,” says Staiger. Doctor and nurse hiring grew as well, but not as fast.

When the federal health care law passed in 2010, economists and other health care analysts expected a similar pattern to emerge, says Staiger. In addition, as states begin work to meet the federal law’s provision for computerized health exchanges employment is growing. “But how all this turns out is very speculative, because we don’t know how the health care law will evolve,” Staiger says.

In fact, the health law and the jobs that come with it could be jeopardized in 2012 if the Supreme Court rules against the law or Republicans take the White House. The Republican presidential candidates are competing over who would kill the law fastest.

Polls show jobs and the economy as voters’ top issue. In one debate, Rep. Michele Bachmann lambasted the health law, asserting that “Obamacare is killing jobs.”

“The same (political) forces that have been creating these jobs could end them very quickly,” says Craig Garner, a health care attorney who served as CEO at Coast Plaza Hospital in Norwalk, Calif., until his family sold it earlier this year. Garner notes the health law provides major spending for pilot preventive care programs that, supporters say, could save money in the long run by keeping people healthier. “I’m afraid they’re going to cut the legs out from these programs before they’ve shown whether or not they can work,” he says.

Also vulnerable: at least $20 billion in federal funds to help doctors and others upgrade computer and communications technology for electronic health records. Federal funds are also helping Alameda County Medical Center in Oakland, Calif., to deploy a major new electronic health record system. “One of our big needs is IT people,” says Jeanette Louden-Corbett, head of human resources there. Hiring hasn’t been easy: “Many of them are in high demand from other organizations.”

Unlike most industries, health care is under-computerized, with institutions poorly linked to one another electronically. Some of the stimulus money is meant to help counteract cultural resistance and financial disincentives to modernize. It’s impossible to determine how many health IT jobs are being created: the Bureau of Labor Statistics doesn’t count those jobs specifically. Nor are those who make and sell the computer and software systems counted as health care workers, although Hewlett-Packard, IBM and others regard health care as a high-growth business.

At least for now, workers like Allie Woods, 29, are in the driver’s seat.  “I didn’t even have to look for a job,” says Woods, who had several offers more than a year before she graduated from her pharmaceutical residency last June with advanced training in “informatics,” which qualifies her to be the liaison between the pharmacy department and the IT department.