Jane Maier was one of a select group of patients invited in early 2012 to help Partners HealthCare, Massachusetts’ largest health system, pick its new electronic health record system – a critical investment of close to $700 million.

The system, which is now being phased in, will help coordinate services and reshape how patients and doctors find and read medical information. The fact that Partners sought the perspective of patients highlights how hospitals increasingly care about what their customers think.

“It’s such a great experience,” Maier said. “They treat us as a member – a partner – in their review process.”

Patient advisory councils, like the one Maier belongs to, often serve as sounding boards for hospital leaders – offering advice on a range of issues. Members are usually patients and relatives who had bad hospital experiences and want to change how things work, or who liked their stay and want to remain involved. 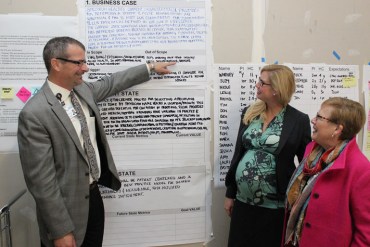 Spectrum Health Chief Quality Officer Kurt Knoth reviews feedback with Whitney Benedict, director of physician relations and market development, and Jan Heerspink, who is a member of one of the system’s patient advisory councils. (Photo courtesy of Spectrum Health)

For Maier, it all started in 2009 when she had surgery at Brigham and Women’s Faulkner Hospital, a Partners facility. Her husband wrote to the hospital’s CEO, praising her experience. The couple was then invited to speak at a hospital leadership retreat, sharing with top executives both the good and the not-so-good, and Maier was recruited to serve on a new patient advisory panel.

This hunt for patient perspective, which is becoming more and more common, is fueled in part by the health law’s quality-improvement provisions and other federal financial incentives, such as the link between Medicare payments and patient satisfaction scores.

Data from 2013 suggested that 40 percent of hospitals had some kind of patient council, said Mary Minniti, a program and resource specialist at the Institute for Patient and Family Centered Care, a Maryland-based nonprofit organization. Though councils appear to have become more common in the past few years, experts say it’s too early to know whether they typically improve hospital practices.

“A lot of hospitals right now are very concerned because of the direction of [Medicare] payments,” said Carol Cronin, executive director of the nonprofit Informed Patient Institute, an advocacy group. “They’re very concerned about patient experience and patient satisfaction.”

Cronin, who has had a relative stay for an extended time in the hospital, volunteers on the patient advisory council at Johns Hopkins Hospital in Baltimore. She was struck, she said, by the “meaty” topics the group addresses. Hopkins’ medical researchers have even pitched their projects to the council to find out what patients and families think are worthy of scientific investigation.

To have an impact, though, these groups can’t operate in isolation.

Patient and family advisory councils are useful if they have the ear of hospital leaders, Minniti said. But the groups also have to be integrated into decision making.

Andy DeVries joined the first patient advisory council at Michigan’s Spectrum Health about 10 years ago, after he was hospitalized with life-threatening injuries from a motorcycle accident.

“Initially, nobody knew who we were and we had to sell ourselves,” said DeVries, who now serves on one of Spectrum Health’s 13 patient groups. Now, by contrast, his group offers input “any time there’s something new that involves patient or family care,” adding that the panel of patient advisers has tackled issues ranging from beefing up the facility’s security to how the hospital should give patients billing information. He’s even worked with the human resources department on what to look for when hiring doctors and nurses. 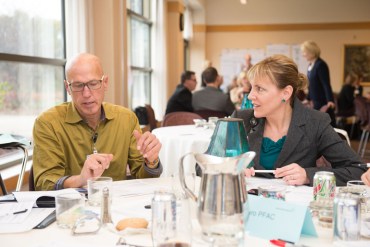 For instance, she said, a member of the orthopedics and neuroscience patient council noticed slow responses when he pushed the call button in his hospital room, a problem staff hadn’t noticed. The council worked with hospital employees to speed up response times. After the fix, positive patient assessments of the hospital jumped.

Maier, from the Faulkner council, recalled a time when hospital executives asked for help with patient complaints regarding nighttime noise levels. Late-night talking by staff was keeping patients awake.

The group discussed potential nighttime “quiet times” and other strategies to minimize noise without keeping doctors from doing their jobs. Once changes were made, patient satisfaction scores went up, Maier said — and a council member noticed a definite improvement the next time he was a patient.

Meanwhile, MedStar Health, which serves the District of Columbia and Maryland, has targeted advisory panels’ efforts to improve both the quality and safety of its care. The system has emerged as a model for finding ways to incorporate patients’ opinions, which was noted in a report from the American Hospital Association.

In one recent case, said David Mayer, MedStar’s vice president of quality and safety, patient advisers helped brainstorm ways to soothe the confusion and stress that often sets in when people have been in the ICU for more than a day. When implemented, the ideas led to reduced instances of patient confusion – known as delirium – which is linked to more destructive behavior, like patients trying to leave the room or bed before they should.

But even as the role of patient advisory committees grows, recruiting members continues to be a challenge. Finding people from diverse backgrounds with both the inclination and time to serve can be tricky, Cronin said. As a result, council members are often “middle-aged and older, white and English-speaking, and a lot of women,” said Deb Wachenheim, health quality manager at the Massachusetts-based advocacy group Health Care For All.

For some hospitals and health systems, though, these panels are just the beginning. Massachusetts General puts patients on various policy setting committees, and Faulkner has a non-voting patient board member.

“As we continue to evolve,” Maier said, “the hospital looks to us more and more.”