SAN DIEGO — Hospitals are usually eager to embrace the latest medical technology, but the road to deploying tablet computers has been bumpy.

iPads have been available since April 2010, but less than one percent of hospitals have fully functional tablet systems, according to Jonathan Mack, director of clinical research and development at the West Wireless Health Institute, a San Diego-based nonprofit focused on lowering the cost of health care through new technology.

“We’re really lagging behind in the U.S. in using electronic medical records on mobile devices like iPads,” Mack says.

The federal government is giving hospitals financial incentives to implement electronic records systems, which can cost a health system between $2 million and $16 million, depending on size, says Mack.

The most popular systems don’t yet make apps that allow doctors to use electronic medical records on a tablet the way they would on a desktop or laptop. To use a mobile device effectively requires a complete redesign of the way information is presented, Mack says.

And that would require hospitals to “cough up a lot more money,” he says. “When you look at a health system that has bought into an EMR, they’re not ready to turn the boat around and start over.”

UC San Diego Health System’s experience with iPads illustrates both the promise and the challenge of using tablet technology at hospitals. Doctors there have been using the iPad since it first came out, but a year and a half later, only 50 to 70 –less than 10 percent of physicians– are using them. Physician Assistant Kate Franko, who is part of the hospital’s transplant team, has been one of the pioneers.

On a brisk day in December, Franko stood by the bedside of patient Jose Reyna, a 24-year-old student who had received a new kidney just days earlier after three years of dialysis.

Franko scrolled through Reyna’s full medical records on her iPad 2, checking his vitals and doctor notes. She also pulled up a graph of data points from his blood labs over the past week, charting the functioning of his new kidney, to help him visualize exactly how well he was progressing. “Your kidney is starting to pick up,” she tells him. 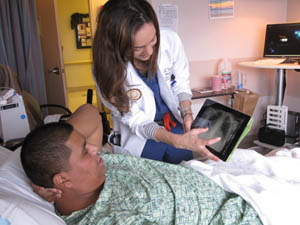 When Reyna asked her a question about breathing problems he had two days ago, she was able to pull up his chest X-ray on the iPad to show him a build-up of fluid in his lungs. “You can see it’s a little white in these corners. It’s what we call patchy,” she explained.

Franko believes the iPad makes her more efficient and improves her interactions with patients. It allows her to interact with a patient in close proximity, rather than behind a desktop or laptop. It also allows her to be completely mobile, pulling up a patient’s records from anywhere in the hospital or even from home.

She also uses a few of the thousands of medical apps available on iTunes. Several help her educate her patients with interactive anatomy drawings, check for drug interactions and even translate her medical questions into dozens of languages for her non-English speaking patients.

For Reyna, who is a tech guy with a smart phone sitting by his bedside, the iPad is a very cool experience. He says the hospital in Desert Hot Springs where he’s from still uses pen and paper.

The iPad is “a great way to meld checking someone’s health and then upgrading it and melding it with technology,” he explains. “It lets me know how I’m doing from the first time I got here.”

But there are also several important downsides that so far have kept UC San Diego from deploying more of the devices. Right now, their electronic record system has a read-only app for the iPad, meaning it can’t be used for entering all new information.

To get around the problem, doctors log on through another program called Citrix. But because the product is built on a Windows platform and meant for a desktop, it can be clunky on an iPad and difficult to navigate. Spotty wireless at the hospital also means doctors are logged off frequently as they move about the hospital.

In addition, the iPad doesn’t fit in the pocket of a standard white lab coat. Franko bought a messenger bag that she uses to cart the device around, but it’s not convenient.

Franko also worries the extra technology causes doctors to be distracted. “It’s hard when you have an iPad in your hands, sometimes there are moments when you want to check your email and possibly update your Facebook, and it does take willpower to not be distracted and to focus on patient care,” she explains.  She removed Facebook from her tablet and makes sure her email is hidden to stay focused.

Dr. Joshua Lee is a hospitalist at UC San Diego and the hospital’s chief medical information officer. He occasionally carries his iPad in the hospital but says it usually isn’t worth it.  The iPad is difficult to type on, he complains, and his “fat fingers” struggle to navigate the screen. He finds the desktop or laptop computers in the hospital far more convenient. “Are you ever more than four feet away from a computer in the hospital? Nope,” he says. “So how is the tablet useful?”

He also worries that the new devices have not been tested as thoroughly as older technology, like desktop computers, especially when it comes to patient privacy. “It reminds us that with all this new technology, is it really better or just newer? Is it more safe or less safe?”

While he waits for the results of a pilot in the hospital, testing whether the iPad makes doctors more efficient, he’s proceeding with caution, allowing doctors in the hospital to adopt the iPad if they want, but also encouraging them to stick with older technology if they prefer.

Even Kate Franko is hedging her bets. In addition to her iPad and two iPhones, she carries a good old-fashioned pager, just in case.

For Hospitals, There’s No App For That