This story is part of a partnership that includes NPR and Kaiser Health News. It can be republished for free. (details)

A new study says there’s no need to worry about hospitals using their new electronic medical records to generate bigger bills and boost their income.

It’s been a concern since at least 2012, when the Departments of Justice and Health and Human Services sent hospitals a strongly worded letter warning them against using electronic records inappropriately. 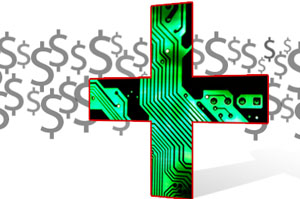 The letter followed reporting by the Center for Public Integrity and the New York Times that found hospitals that used electronic records were billing Medicare for significantly more than hospitals still using paper records. Computers, the theory goes, make it easier to charge for more procedures or more expensive procedures than a paper record would.

“When I read those articles I thought, that’s interesting, I’m not surprised to hear that people are using tools to sort of maximize revenue,” says Dr. Ashish Jha, a researcher at the Harvard School of Public Health.

But a colleague, Julia Adler-Milstein at the University of Michigan, was skeptical, Jha says: “Her take was that hospitals have already maximized their revenue generation from billing, and the chances that electronic records are somehow going to magically make that even more financially lucrative, she just didn’t buy it.”

So Jha and Adler-Milstein designed a study to figure it out. They compared billing records from 393 hospitals with electronic records to 782 hospitals still using paper records. They were careful to make sure the hospitals they compared matched each other in terms of size and status as teaching hospitals or for-profit companies.

“To my surprise, we found nothing,” says Jha. “We found that electronic health records didn’t really change billing practices at all.”

He concludes the study with advice for policymakers: “This worry about excessive billing, the empirical evidence says this should not be a big focus of attention.”

But Dr. Donald Simborg, a pioneer in the field of electronic health records, says this study does not touch upon the area he believes is key..

“They’re looking in the wrong place,” Simborg says, “I don’t think anybody’s done the study that needs to be done.”

Simborg started designing computerized patient records in the 1960s. More recently, he’s led a pair of government advisory panels on how to guard against fraud in digital health records.

Simborg says Jha and Adler-Milstein only looked at inpatient records, those for people who spent at least one night in a hospital. The real area of concern, he says, is in emergency departments and outpatient clinics, an increasing number of which are owned or run by hospitals.

“Hospitals already have software that helps them [maximize billing for inpatient stays].  They’ve been doing that for years,” Simborg says. What’s new is that doctors in emergency rooms and clinics are just now getting digital record keeping tools, which sometimes prompt them to over-document.

Simborg says he’s seen it happen when he was watching doctors use electronic records he designed.

“I would see that they were documenting things that I know they didn’t do to the patient. And these were not crooks, it’s just kind of human nature about having a tool that’s so easy to click a button that puts in a lot of default information when you’re in a hurry, because physicians are always in a hurry,” Simborg says.

Electronic records that automatically fill in standard protocols for certain kinds of visits, like a well- child check or a Medicare annual physical, can help doctors be more efficient. But if doctors don’t delete things they chose not to do during such a visit, they can end up generating a higher than necessary bill.

Simborg says some systems even suggest ways doctors can modify their patient visits to allow them to charge more.

To Simborg, the warning letter to hospitals from federal regulators was the wrong approach. He says government watchdogs should focus more attention on the software industry.

“They can develop the guidelines that would reduce the likelihood that an electronic record would be abused,” Simborg says, like making it easier for auditors to follow a doctor’s digital record keeping trail. “That’s different than threatening that they’re going to be prosecuted if they do these things.”

Chantal Worzala, the American Hospital Association’s director of policy, says the AHA is concerned about, “insuring we have vendors who are creating products that support compliance with best practice.”

She’s pleased that Jha’s study shows that hospitals aren’t using electronic records to generate bigger bills for inpatient stays, but says the tools are new and will require ongoing vigilance.

“We could all benefit from learning more about how electronic health records work,” Worzala says.