The Villages Regional Hospital did not sweat its decision to add hyperbaric oxygen therapy in 2013.

Hyperbaric treatment, increasingly given to diabetics — many of them elderly with persistent wounds — involves breathing pure oxygen inside a pressurized air chamber typically for two hours each weekday, often for more than a month. Twenty outpatient sessions can bring a hospital $9,000 in revenue.

Villages serves a central Florida retirement community that supplied nearly half of the hyperbaric patients at another hospital 30 minutes away. Hospital officials knew their clientele preferred their medical appointments only a golf-cart’s ride from home.

Many hospitals seem to agree. Enticed by healthy Medicare payments — about $450 for a two-hour session — and for-profit management companies that do much of the work, nearly 1,300 U.S. hospitals have installed hyperbaric facilities. That’s triple the number that an industry group says offered the service in 2002, when Medicare first decided to pay for the therapy for certain diabetic wounds.

Medicare — the largest payer of hyperbaric services — has flagged evidence of overuse in at least some parts of the country. Medicare officials declined to comment for this story, but they have retained coverage for more than 15 years, even as studies have questioned the therapy’s effectiveness.

The American Diabetes Association does not recommend the treatment. After an ADA committee of experts in diabetes care reviewed the available research last year, it concluded there was “not enough supporting data on the efficacy of this treatment to recommend its use,” said William Cefalu, the association’s chief medical officer.

Some experts say hyperbaric therapy’s increased use for diabetic wounds owes more to hospitals’ pursuit of Medicare revenue than to the treatment’s proven value.

“The science remains poor to support its use, but it is being widely used [in the United States], and one possible explanation to this may be related to reimbursement,” explained Dr. Andrew Boulton, an internationally recognized expert on hyperbaric therapy, and a professor of medicine at University of Manchester medical school in Great Britain.

“Some folks are chasing the money. It’s seen as a money grab because reimbursement has been favorable,” acknowledged John Peters, executive director of the Undersea & Hyperbaric Medical Society, which accredits 200 hyperbaric oxygen facilities nationally and has inspected 500 for accreditation in the past 15 years.

Offered at a handful of hospitals in the last decades of the 20th century, hyperbaric chambers were a niche treatment for deep-sea divers suffering with the bends — a painful and potentially fatal condition where gas bubbles accumulate in the bloodstream during too-rapid ascents from depth. In 2002 — after industry lobbying and some suggestive research — Medicare approved hyperbaric therapy for certain diabetic wounds that did not respond to conventional treatments.

That decision drove a building boom in outpatient wound care centers over the next half-decade, featuring hyperbaric therapy. Medicare covers the treatment for more than a dozen conditions in which skin fails to heal, such as failing grafts and tissue damage from anti-cancer from radiation, but the USA’s rising diabetic population supplies much of the demand.

It costs about $500,000 to install a hyperbaric unit with two chambers. With Medicare’s lucrative reimbursement policies, “hospitals can generate cash almost immediately,” Peters said. During hyperbaric sessions, patients merely lie on a bed in a glass-enclosed tube containing high-pressure oxygen under a physician’s supervision.

The business model is so compelling that management companies typically pay for the equipment and staff. Hospitals provide space for the chamber, make patient referrals and handle billing. The companies and the hospitals split revenue from insurers.

Because of poor blood circulation, diabetics are susceptible to developing ulcers in their lower legs and feet that heal poorly and can sometimes lead to amputations. Hyperbaric oxygen therapy, in theory, works by stimulating the body’s creation of new blood vessels and aiding the formation of new skin around a wound. Side effects are uncommon but include ear and sinus pressure, paralysis and air embolisms, according to the Food and Drug Administration.

In 2015, Medicare imposed stricter billing procedures in three states where its expenses for hyperbaric services were 21 percent above the national average — possible evidence of overuse or overbilling. Providers in Illinois, Michigan and New Jersey must get regulators’ preauthorization of expenses before treating Medicare patients for the most commonly approved conditions in non-emergency cases. Elsewhere, Medicare requires documentation supporting hyperbaric therapy’s need only after services begin.

Signs of abusive industry practices predate the 2015 action. A critical report by the Health and Human Services Department’s inspector general in 2000 disclosed that Medicare was billed millions of dollars for non-diabetic wound care treatments that were inappropriate or excessive. The office has promised a follow-up report before Oct. 1 — its first since 2000.

The Justice Department alleged fraud or other wrongdoing involving hyperbaric therapy in at least five cases from 2008 to 2014. It has won more than $11 million in penalties and restitution — along with some jail sentences — in court rulings and settlements.

(The FDA warned in 2013 about some treatment centers’ falsely promoting the therapy for unapproved uses, including as a cure for cancer, autism and diabetes.)

Medicare’s crackdown on billing in three states saved $5.3 million in its first 13 months, the government said in November. Medicare’s total spending on hyperbaric therapy — including all approved conditions — in 2015 fell about 10 percent to $230 million. That was the first annual decline in a decade.

Debates about the utility of the treatment continue despite decades of use.

In fact, few large, controlled studies have explored hyperbaric oxygen therapy for diabetic wounds — and nearly all were done outside the United States.

Some studies have found the treatment benefits certain patients while others have concluded it neither increases a wound’s chances of healing nor prevents amputations. The problem is knowing which wounds would have healed over time on their own.

Businesses and individuals invested in the facilities remain unalloyed boosters. The treatment “used to be considered voodoo medicine. But today more doctors have been swayed, and it’s now seen as mainstream therapy,” said Marc Kaiser, owner of Precision Health Care, which manages hyperbaric centers at five hospitals in New York and Connecticut.

Based on studies and anecdotal experience, Dr. Geoffrey Gurtner, a plastic surgeon who helped establish the Stanford University Wound Care Center in 2014, believes the therapy has some merit. But he said that research is needed to understand how the treatment works, which patients need it and the right number of sessions for each wound.

And, critics say, companies are profiting from and abusing the current state of uncertainty. Medicare pays for hyperbaric therapy for diabetic wounds that have not healed after 30 days of standard treatments. If hospitals provide more than 30 treatments, they must document that patients’ wounds are improving.

“The problem is, we see these financially motivated centers keep doing the treatment into the hundreds of visits,” she said.

Also, Medicare pays nearly double the standard rate when the treatment is performed at hospital-affiliated facilities, which can add on a “facility fee.” Because of this quirk in the rules, hyperbaric management companies tend to court hospitals to install their devices. 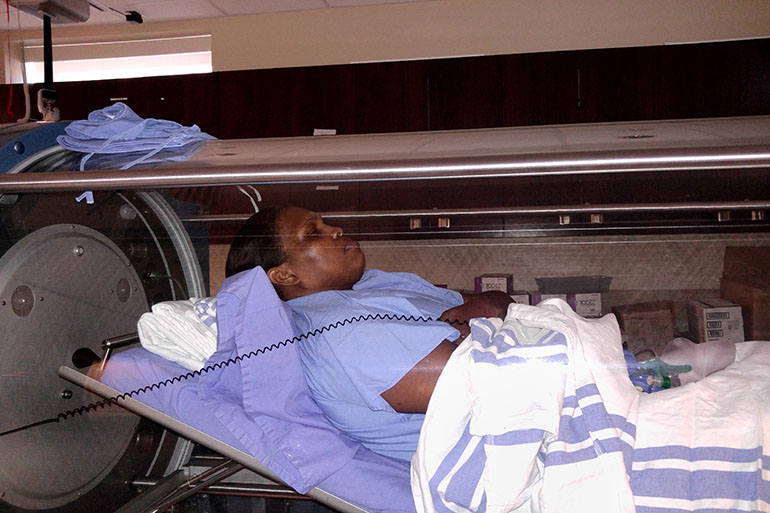 Stretched out in one of the hospital’s four hyperbaric chambers, wrapped in blankets with her head propped up to watch television, Hall breathed pure oxygen for two hours at a time.

One wound on the bottom of her left foot healed. The other did not.

“I did what I had to do to save my foot,” said Hall, 50, who is on Medicare disability.

Sometimes even dozens of treatments do not avert amputations, as diabetic William Padgett Jr., 65, of Culpeper, Va., can attest. He lost his right leg in 2013 after nearly 90 hyperbaric sessions failed to heal a wound.

Last year, he tried hyperbaric oxygen again to close a wound on his left leg, taking about 80 sessions over four months at a hospital in Arlington, Va. The wound healed. “It’s been a slow process … but well worth the time,” he said. 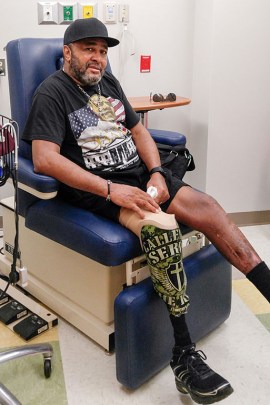 William Padgett Jr. of Culpeper, Va., received dozens of hyperbaric oxygen therapy sessions in 2013 and again in 2016 for diabetic wounds on his lower legs. Part of his right leg still had to be amputated, but the left one was saved. (Phil Galewitz/Kaiser Health News)

In any one case, it is hard to say whether the treatment was key to success.

A 2014 federal whistleblower lawsuit against Healogics, which manages about half — 750 — of the nation’s hospital-owned wound-care and hyperbaric centers, raised other concerns. Two doctors and a third employee who worked for Healogics alleged a company conspiracy to defraud the federal government by billing it for unnecessary wound care and hyperbaric services.

Healogics denied the claims in its court-filed responses, and a judge dismissed the case for lack of detail. It is under appeal.

The lawsuit alleged Healogics “actively targeted each and every [wound care] patient for conversion” to hyperbaric therapy and set benchmarks for each center on the amount of hyperbaric care that would be provided.

According to Healogics, 5 percent of its 326,000 patients last year had hyperbaric treatment. Only 2 percent of those received more than 50 sessions.

Hospitals Ramp Up Hyperbaric Therapy For Diabetics, Despite Concerns