As more Americans gain insurance under the federal health law, hospitals are rethinking their charity programs, with some scaling back help for those who could have signed up for coverage but didn’t.

The move is prompted by concerns that offering free or discounted care to low-income uninsured patients might dissuade them from getting government-subsidized coverage. 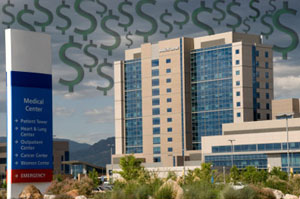 If a patient is eligible to purchase subsidized coverage through the law’s online marketplaces  but doesn’t sign up, should hospitals “provide charity care on the same level of generosity as they were previously?” asks Peter Cunningham, a health policy expert at Virginia Commonwealth University.

Most hospitals are still wrestling with that question, but a few have gone ahead and changed their programs, Cunningham says.

The online charity care policy at Southern New Hampshire Medical Center in Nashua, for example, now states that “applicants who refuse to purchase federally-mandated health insurance when they are eligible to do so will not be awarded charitable care.”

The same rule disqualifies aid to those who refuse to apply for expanded Medicaid, which New Hampshire lawmakers voted to extend, beginning Aug. 15.

Some Hospitals Require A Nominal Contribution

At BJC HealthCare, which has 12 hospitals in Illinois and Missouri, including Barnes Jewish Hospital in St. Louis, anyone receiving financial assistance must make some contribution to their care, for instance, $100 for emergency care.  BJC does not bar financial aid to those who have refused to buy insurance through the health care law.

“Patients will continue to receive needed medical care regardless of their ability to make payment at the time of service,” says spokeswoman Kim Kitson, adding the changes are likely to affect fewer than 3 percent of patients.

To be sure, hospitals have a strong financial interest in having more patients covered by insurance. That’s particularly true for hospitals that see many uninsured patients because the health law also reduces their government payments for uncompensated care. The assumption was that most uninsured people would gain coverage and no longer run up large hospital bills that could not be paid.  But since the Supreme Court ruled that states could opt out of the health law’s Medicaid expansion, 24 states decided not to participate. Hospitals that treat large numbers of low-income people in those states face real financial pressures.

In addition, the health law requires nonprofit hospitals to make their written charity policies widely available, although it does not specify what criteria hospitals use to determine who is eligible. The assistance programs aren’t just for the uninsured: Most hospitals also help insured patients struggling to pay deductibles or other costs associated with their care.

“Even those with health insurance are ‘uninsured’ for an increasing percentage of the medical care they need” because many have high annual deductibles, said Steven Lipstein, president and CEO of BJC HealthCare, in an opinion piece published in The St. Louis Post-Dispatch.

Still, as the health law changes the insurance marketplace, “we are seeing charity care reductions,” says Michael Miller, director of strategic policy at Community Catalyst, an advocacy group in Massachusetts.

While Miller says the health law will result in more people with insurance, the need for financial assistance programs remains. He disagrees that charity programs would dissuade uninsured consumers from enrolling in coverage since most will need other health services besides hospital care.

“It’s really premature for hospitals to start presuming that level of calculation on the part of someone who shows up uninsured,” Miller says.

Is The Patient Unwilling, Or Unable To Pay?

Hospital executives say they are weighing many questions in evaluating whether to change their policies.  Did people choose not to enroll – or were they unable to get through the new health insurance marketplaces during the open enrollment in the fall and spring? Did they know subsidized coverage is available? Could they afford insurance, even with a subsidy, given that many insurance plans have deductibles that can run into thousands of dollars annually?

“That’s something hospitals have struggled with for decades: Is the patient unwilling to pay or unable to pay?” says Katherine Arbuckle, senior vice president and chief financial officer at Ascension Health.

At Ascension, one of the nation’s largest not-for-profit hospital groups based in St. Louis, Mo., a special task force will make recommendations before the end of the year on whether changes are needed.

“How do you treat those who decline [coverage]? Do they get free services when others have paid?” asks Arbuckle.

While nothing has been finalized, Arbuckle says the Catholic hospital chain has ruled out some changes, saying it will not reduce the income threshold for those who qualify for free care, currently at twice the federal poverty rate. That’s about $23,340 for an individual.

Many hospitals are simply checking to see if their policies comply with the health law’s requirements, says Todd Nelson, a director at the Healthcare Financial Management Association, which represents more than 40,000 people who work in health care finance.

He is not surprised that some require applicants to apply for insurance coverage.

“Hospitals have always encouraged patients to apply for coverage they are entitled to receive, whether commercial insurance through employer or through programs like Medicaid,” he says.

Several hospital chains, including two of the largest — Tenet and HCA — say they don’t have plans to change their charity care policies. Both offer free care to those who meet certain requirements, including earning less than twice the federal poverty rate.

While many charity care programs have been in place for decades, others were established following widespread complaints and lawsuits brought in the late 1990s over aggressive hospital collections tactics.  Those included placing liens on patients’ homes and charging the uninsured the highest list prices, which were far more than what insurance companies paid on behalf of policyholders.

Now, under the health law, nonprofit hospitals must make reasonable efforts to determine if patients qualify for help before taking tough collection tactics. And the law says the amount sought from the patient cannot be the hospitals’ list price, but an amount closer to what is generally billed to insured patients.

The big benefit from the health law is that it requires hospitals to make their charity policies public, says Mark Rukavina, an expert on medical debt who consults for hospitals.

“The ACA’s requirements will improve transparency dramatically,” he says.